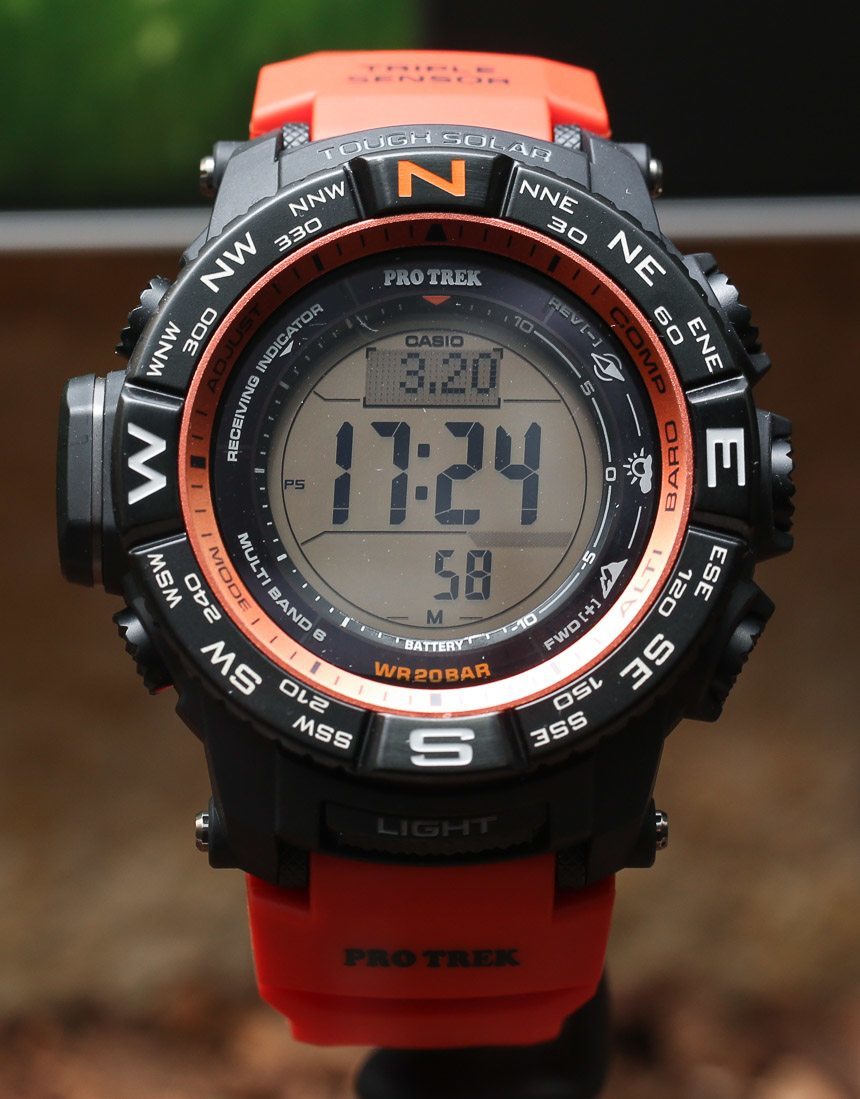 For 2015, Casio introduces yet another new Pro Trek collection watch with the PRW-3500 – offered in a few variations – which predictably build upon the impressive Casio Pro Trek PRW-3000 (reviewed here) from 2014. These fresh “many function” sports watches are a favorite among outdoors enthusiasts and active professionals, and here, they continue a design theme Casio has been carefully refining for many years.

In the age of smartwatches, the Casio Pro Trek models still hold their own, showing that in order to be truly versatile, smartwatches have a long way to catch up before they can beat one of these mega digital watches. The Casio Pro Trek PRW-3000 was important for a number of reasons. One was for having Casio’s third generation Triple Sensor Version 3 system in the quartz movement (which is more accurate, uses less power, and is smaller than before). Second was because for a Pro Trek collection model it was relatively small with a case diameter of just 47mm wide (very small for a Pro Trek).

A major area of improvement in the PRW-3500 over the PRW-3000 is in water resistance which is back up to 200 meters (a typical Pro-Trek standard) from the PRW-3000’s mere 100 meters of water resistance. For a watch meant to go anywhere, the more “general purpose” PRW-3000 wasn’t quite up to snuff for some recreational diving. Also, rather than having a case produced from “resin and aluminum” (as is the case with the PRW-3000), the Casio Pro Trek PRW-3500’s case is in resin and steel (which adds just a touch of durability for the most demanding of consumers.

The Casio Pro Trek PRW-3500 collection is a wonderful all around Pro Trek model with all the features you’d expect, but none of the more exotic Pro Trek functions out there, such as a tide chart or moon phase indicator that you can find on some other models. Like most Pro Trek models, the movement in the Casio Pro Trek PRW-3500 collection offers solar (light) power generation, and a 6 band atomic clock radio signal receiver to update the time automatically in places where the signals are located. Casio’s newest GPS/Atomic clock radio signal hybrid movements, such as in the G-Shock GPW-1000, are not yet available in a Pro Trek collection watch. I think it is only a matter of time before Casio includes this technology in a Pro Trek model.

The list of features and functions contained in the movement of the Casio Pro Trek PRW-3500 is very long but should be familiar to anyone who has had a Pro Trek model in the recent past. I personally use functions such as the sunrise/sunset time indicator, the chronograph, and world time indicator the most, in addition to basic time telling features.

Of course what makes the Casio Pro Trek PRW-3500 a “real” Pro Trek is the triple sensor functionality which offers (at the touch of a button on the side of the case) a compass, barometer, altimeter, and thermometer. Each of these functions offer vastly improved performance compared to any Pro Trek model that does not have the Triple Senor Version 3 module in the movement.

As I am writing about the Casio Pro Trek PRW-3500 I am asking myself, “how could Casio make this a cool smartwatch?” I think that it is possible for Casio to add useful smartwatch functionality, while at the same time, allowing a Pro Trek to maintain its reliable “go anywhere” spirit that it gets from not needing to have its time set or needing a charge.

A smart Pro Trek watch would most certainly need to have a GPS signal receiver and make the best use possible out of its solar power system so that you’ll never need to charge a battery. It might also be nice to combine the sensors on the watch with those on a phone to come up with some interesting information on that lovely, large, legible dial. Here’s me hoping and wishing that Casio’s engineers can keep the Pro Trek amazing in the future while also adding smartwatch features that can be optionally used with it.

For now, we have the Casio Pro Trek PRW-3500 collection, which may not add revolutionary new features, but does help round out the brands most modern Pro Trek collection models with all the technology and durability core Casio Pro Trek customers expect.