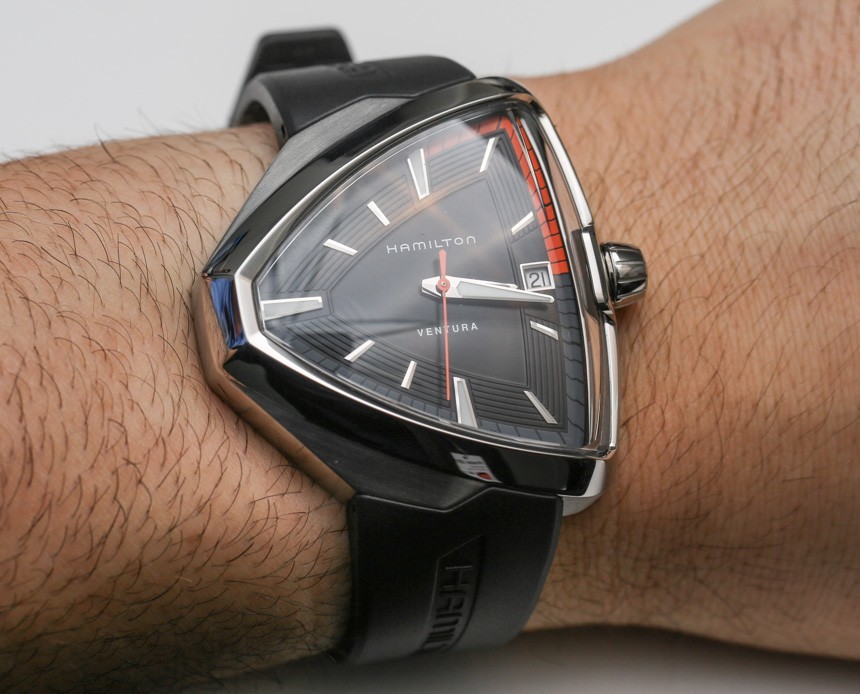 Icons and watches go together like coffee and cream. Nowadays, with the cult of celebrity so firmly ingrained in western society, it seems obvious that having a leading star flash their wrist candy at their adoring audience would see a brand’s sales go through the roof. But when Elvis Presley wore the Hamilton Ventura in the 1961 film Blue Hawaii, the then American brand couldn’t have imagined the enduring effect of Presley’s contribution. To celebrate what would have been the King’s 80th birthday, Hamilton are releasing the Hamilton Ventura Elvis80 watch.

This incarnation of the brand’s most iconic range is worlds away from the stainless steel variant worn by Elvis on screen some 54 years ago, but it still features the unmistakable Hamilton Ventura DNA. With brands scrabbling for innovative case silhouettes to set them apart from the crowd, the Hamilton Ventura, with its asymmetric triangular case, seems almost like the designers of the time activated ‘cheat mode’ before rolling it out into the market. It shouldn’t be so cool. It shouldn’t be so identifiable more than half a century on, but because it broke the mould so startlingly, it is hard to do anything remotely similar without people comparing it to the Hamilton Ventura. And so, with the perfectly timed release of what was to become a classic, Hamilton somewhat sewed-up that corner of the market.

Looking back at the model worn by Elvis provides a stark contrast with the latest addition to the Hamilton Ventura family. The Hamilton Ventura Elvis80 is much larger, comes in a black PVD option, and sports a flash of colour on the dial – orange integers mark out the minutes between 12 and 3 o’clock, coordinating nicely with a seconds hand, which will either sweep or step depending on your movement choice. 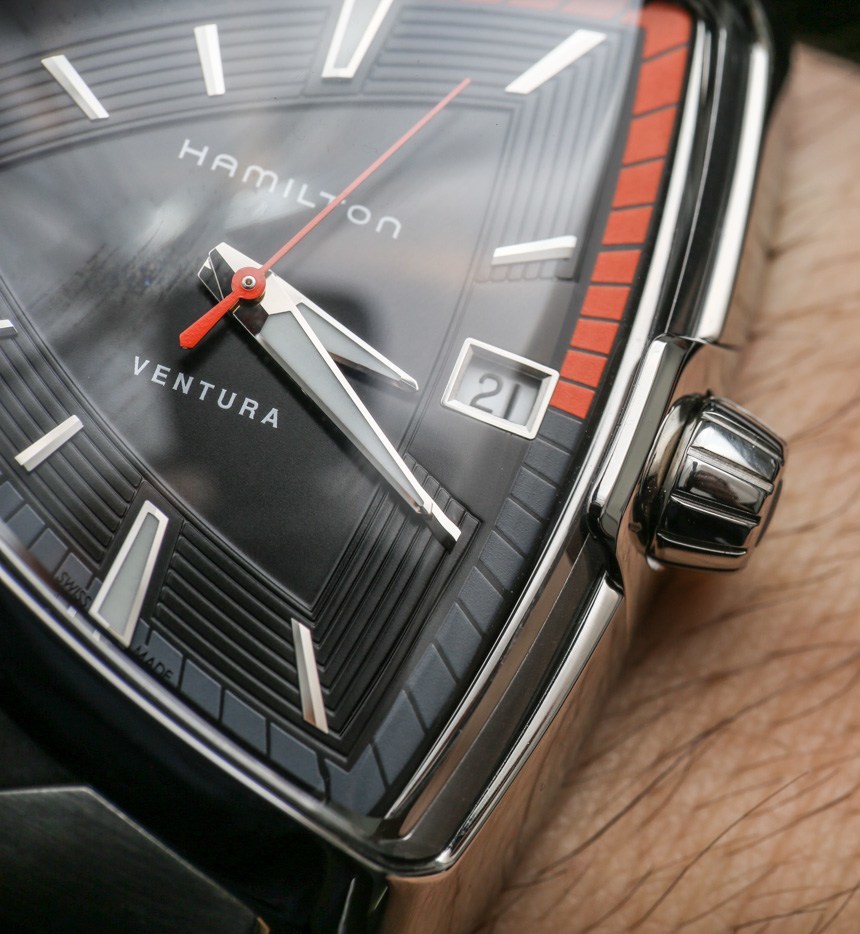 That’s right! With wearer comfort and choice in mind, Hamilton have decided to release this watch, which measure 44.6mm at the widest point of the shield, in a combination of calibres and strap materials. The automatic version will be in black PVD, with the choice between a sporty black rubber strap or a black leather stitched version. The quartz version will be produced in stainless steel, with a selection of straps available. You can choose between black rubber, black leather, or a cleverly integrated bracelet that features unusually shaped articulation points to ensure the case flows seamlessly into the bracelet. 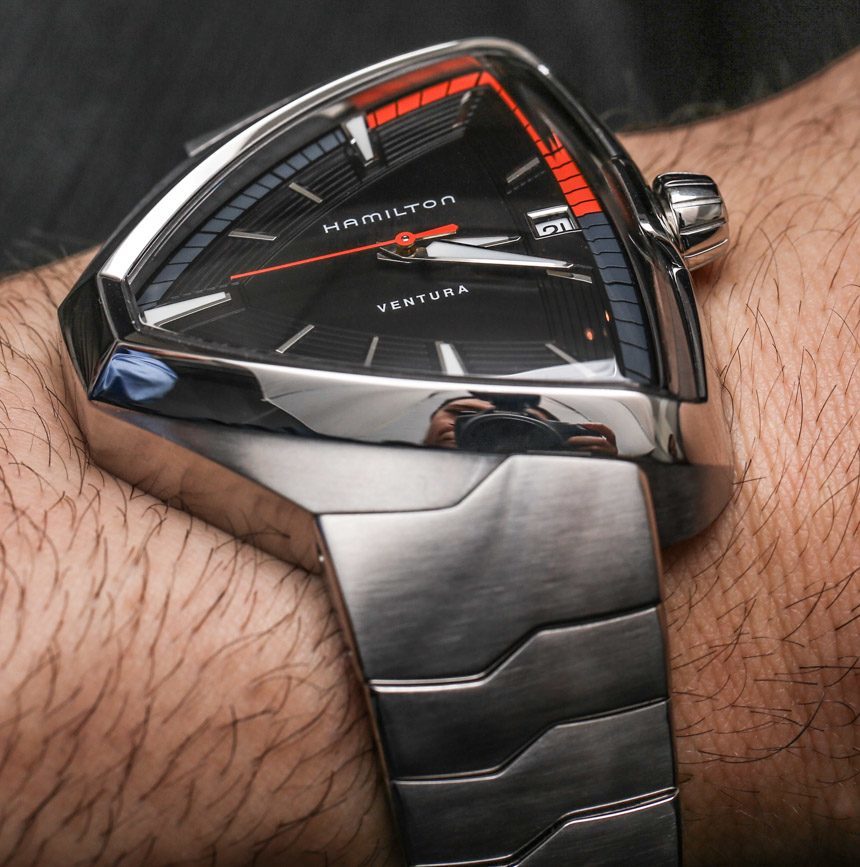 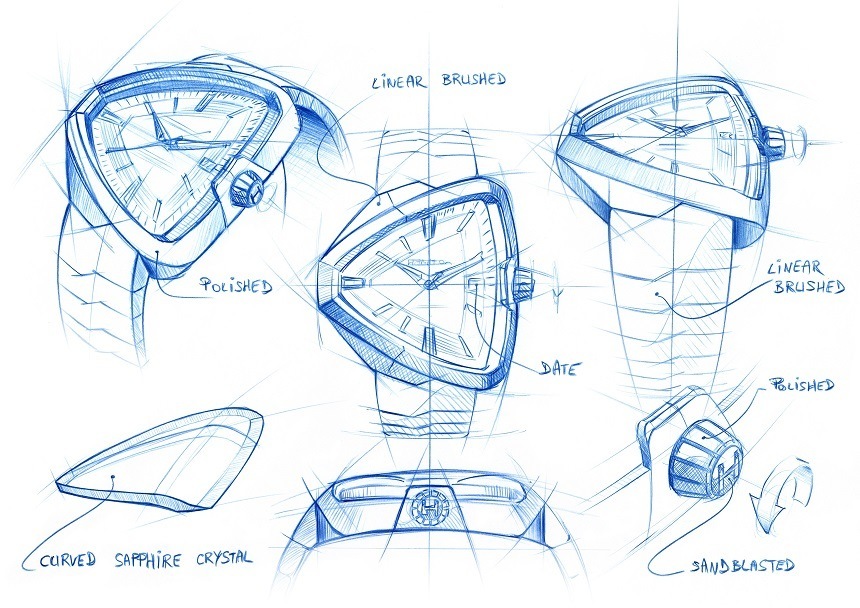 The watch runs on Hamilton’s H-10 movement, which has a power reserve of 80 hours. That kind of functionality is a real boon in a watch that retails for less than $1,500. Add into the mix that you’re getting a slice of history when you strap one of these black behemoths onto your wrist, and the price seems eminently reasonable. Sure, in terms of performance and complication, it is no better than other Hamiltons in this bracket. But the Hamilton Ventura styling gives it that je ne sais quois that makes it more likely to hold its value in years to come. I am pretty sure that Elvis himself would have approved of this update, especially the black with black rubber. It would sit nicely on his wrist, matching his edgy biker jacket, and hip-swinging swagger to a tee. 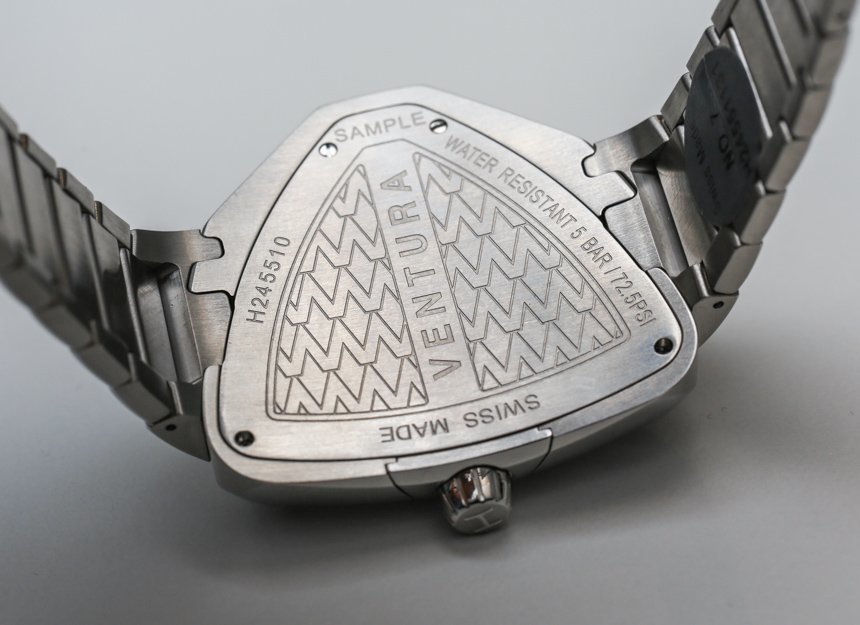 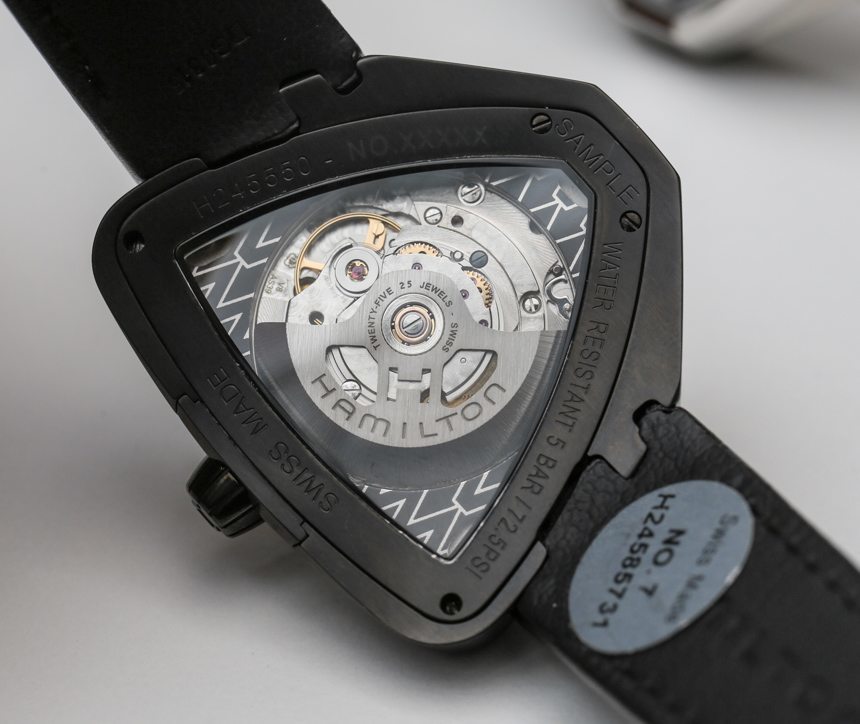 The watch is water resistant to 50 metres and very legible thanks to the large, steeply-sloped anti-reflective sapphire crystal that adds to this timepiece’s eye-catching appearance. I am a huge fan of the pains taken by Hamilton to do something a little new with the Hamilton Ventura Elvis80 this time around. I have always been a fan (I even owned the very same version that Elvis popularised for a while), but it was certainly a little dated in its original guise. This update maintains the bulk added to the range by the Hamilton Ventura XXL, but it does it in a more sympathetic and subtle way. The strange peaks and troughs of this wrist sculpture make it looks almost like it has come from Hamilton’s sister brand Rado. 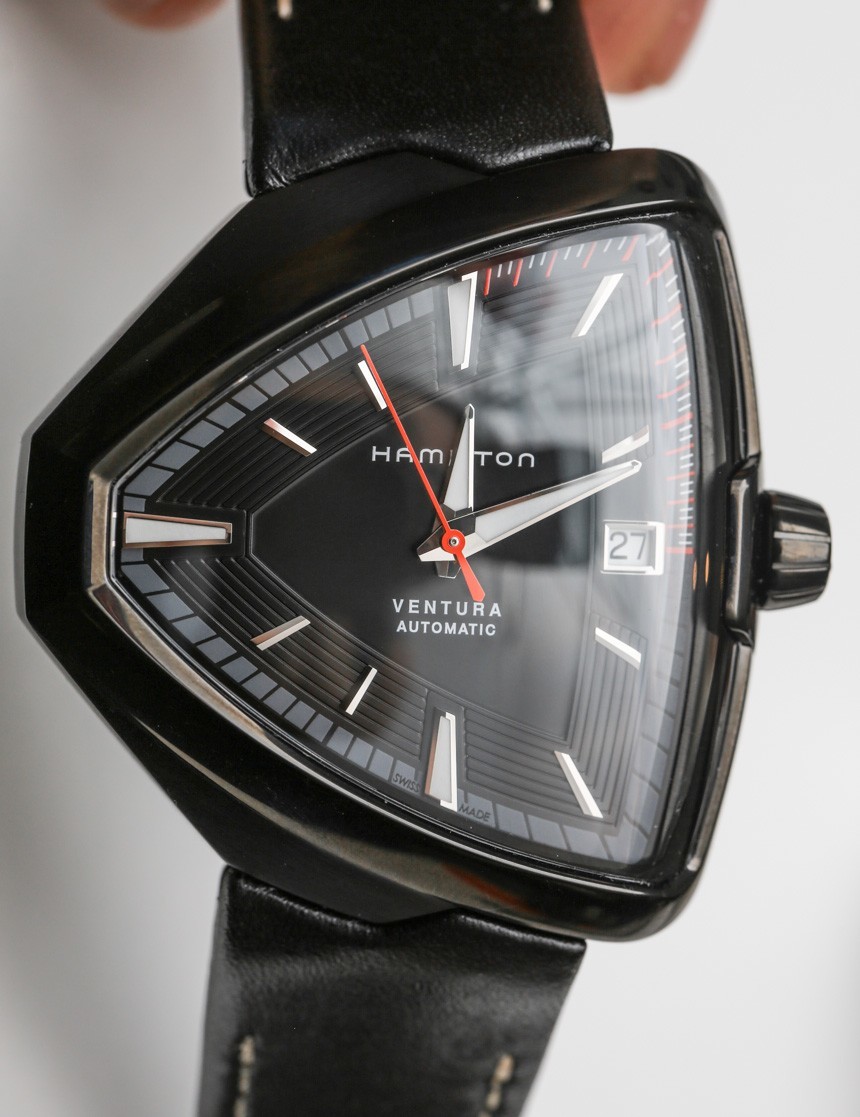 One particular design element that excites me is the crown. The sloped sides may not seem like anything other than a stylistic choice, but bear in mind that this is a big watch before you factor in the crown size. The conical shape will make wrist-movement a lot more comfortable than it would have been had the crown maintained the same protrusion but been straight-sided. The Hamilton Ventura Elvis80 Automatic will retail at $1,495. The quartz version will carry a price tag of $1,045. I believe it to be one of the better deals in this price bracket, simply because its origins will forever anchor it in time and pop culture. hamiltonwatch.com