During the SIHH last week, several non-participating, independent watch brands took the opportunity to unveil new pieces, outside of the fair, to the hordes of retailers and media that descended on Geneva. One was Geneva-based F.P. Journe, which introduced a new version of its Octa Divine watch in a larger, 42-mm case.

The F.P. Journe Octa Divine is the latest model in the Journe portfolio to be reimagined in a 42-mm case — following the up-sized versions of the Chronomètre Optimum, Quantième Perpétuel, and Octa Lune — for the sake of enhanced legibility and contemporary tastes. The windows of the large date display at 11 o’clock have been enlarged, drawing attention to the solid gold dial and its elegantly arranged array of displays: hand-type power reserve at 10 o’clock, moon-phase display on a sapphire disk between 7 and 8 o’clock, and a disk-type small seconds aperture (with tiny red arrow indicators) between 4 and 5 o’clock. 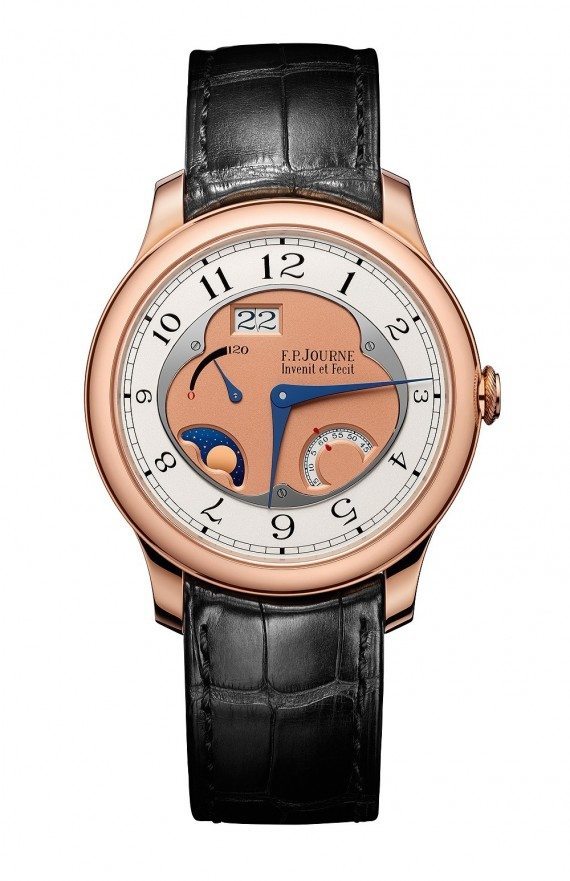 The dial features several aesthetic elements that are exclusive to F.P. Journe, such as the distinctively shaped blued steel hands and streamlined, polished steel circle screwed to the dial, along with differently sized Arabic numerals that flow around the outer hours-and-minutes ring.

The watch’s automatic movement, Caliber 1300.3 — like all Journe movements, made primarily of 18K rose gold — has an off-center rotor in 22k rose gold with guilloché pattern and an engraved F.P. Journe logo. Its unidirectional winding system provides a lengthy power reserve of more than five days. The movement, which has 37 jewels and a brisk frequency of 21,600 vph, includes a self-locking ball bearing system, ensuring that each movement, no matter how slight, is utilized for the optimal winding of the watch. As per Journe’s usual standards, the movement boasts a high level of haute horlogerie finishes — circular cotes de Geneve on the bridges and partial circular graining on the baseplate; polished screw heads with chamfered slots; pegs with polished, rounded ends; and hand polishing and chamfering on all steel components.