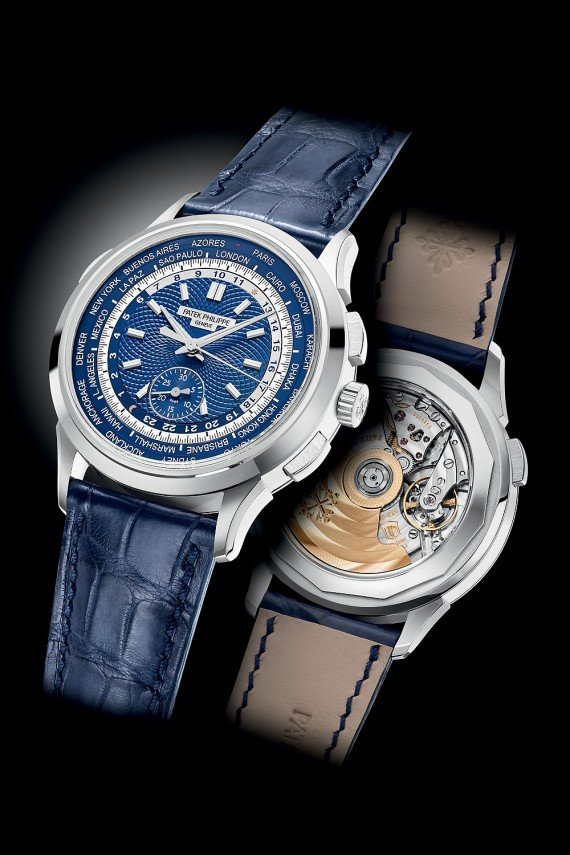 Patek Philippe is releasing a slew of new complicated watches at Baselworld 2016, including, most notably, its very first timepiece containing both a world-time indication and a chronograph. As Patek fans will have come to expect, the Patek Philippe Ref. 5390G World Time Chronograph also features an entirely new in-house movement.

In addition to being the first Patek Philippe watch with this particular combination of functions, Patek says it is also the thinnest such watch in that category, measuring just shy of 13 mm thick. The round, 18k white gold case is 39.5 mm in diameter and has a sapphire caseback. The case combines elements of several classical Patek watches of the past, including the smooth silhouette of the Bauhaus-inspired Ref. 96 from 1932 and the winglet-style strap lugs found on models of the 1940s and 1950s.

The three-zone dial combines blue and silvery elements, elegantly structuring the display of the local time as well as that of the other 23 world time zones simultaneously and the chronograph readouts. The outermost ring is a blue disk with 24 world city names for the 24 time zones; one level beneath it is a white chronograph scale divided into 1/4-second increments. Beneath that is a 24-hour ring, separated into bright and dark zones (along with sun and moon symbols) for day-night indication. Finally, the center of the dial is adorned with a striking, manually executed guilloché pattern.

The manufacture movement powering the watch’s array of functions is Patek Philippe Caliber CH 28-520 HU, with automatic winding and an integrated chronograph with column-wheel control and a vertical clutch. The chronograph start, stop, and zero-reset pushers are in their traditional positions at 2 o’clock and 4 o’clock, while an additionsl pusher at 10 o’clock controls the easy-to-use world-time function: each press of this pusher simultaneously advances the hour hand and both world-time scales in one-hour increments without disrupting the accuracy of the movement. Like all Patek Philippe calibers since 2009, it meets the stringent in-house standards of Patek Philippe’s own quality hallmark.

The Patek Philippe Ref. 5930G World Time Chronograph comes on a hand-stitched, llarge-scale matte navy blue alligator strap with a white-gold Calatrava-style fold-over clasp. It will retail in the U.S. for approximately $73,700. Below please find some live photos taken at Patek’s presentation of the watch at Baselworld 2016.