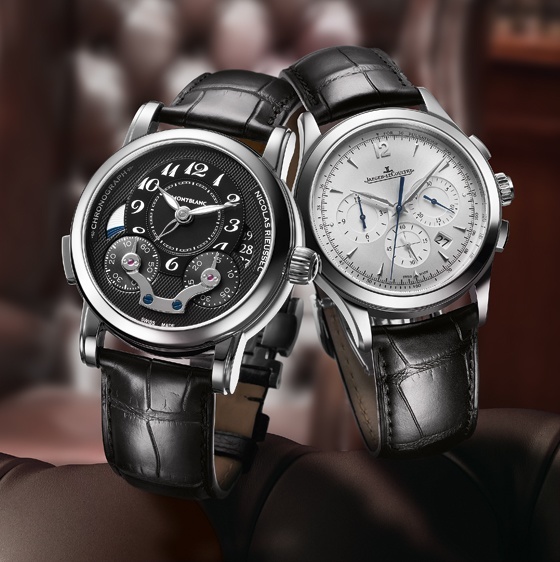 What’s your type? Is it classic or modern? Eye-catching or understated? Jaeger-LeCoultre’s Master Chronograph, from the brand’s manufacture in Le Sentier, Switzerland, is classically elegant and understated.

It debuted in 2010. Every detail is handsome and nothing is flashy or controversial. Its design embodies the serene sense of order found in traditional watch construction, which makes it a perfect companion to wear at the office as well as for gala occasions. Its price ($10,000) isn’t extremely high, and when you wear it, you won’t look like you’ve lost touch with reality.

The second watch in our test, Montblanc’s Nicolas Rieussec Chronograph Automatic, is elegant as well, and it has a similar price ($10,700). But it’s hard to further categorize this watch. Its materials and colors are subdued, but the unusual design of its dial draws attention. It debuted in 2011 as a further development of Montblanc’s first manufacture caliber, the MB R100, which was launched in the 2008 Nicolas Rieussec Monopusher Chronograph. Although Montblanc is based in Hamburg, Germany, its watches are made at the brand’s own ateliers in Le Locle, Switzerland.

Is Montblanc’s chronograph classic or modern? This question is hard to answer. The off-center dial, with chronograph disks rotating under ashared bridge, looks very contemporary. But, in fact, this unusual arrangement for the stopwatch mechanism recalls a historical predecessor.

In 1821, Nicolas Mathieu Rieussec, who was watchmaker to the royal court of France’s King Louis XVIII, invented a “chronograph” in the truest sense of the word because his revolutionary device was indeed a “time writer.” (Chronos means “time” and graphein means “to write.”) Rieussec designed a tabletop apparatus with a wooden case that contained a pair of buttons and two rotating dials: one for the seconds, the other for the minutes. Above these dials he fastened a slender hand with ink-filled nibs attached to its tip. Rieussec unveiled his timing device at a horse race on the famous Champ de Mars in Paris. While the dials of the device turned, the timekeeper pressed a button the instant a horse crossed the finish line, causing the hands to touch the dials and leave little ink marks on them. For the first time ever, a timekeeper could capture the running times of all horses in the race without taking his eyes off the action. The times could later be read from the disks. Afterward, he simply wiped the ink off the disks and was ready to time the next race.

Both dials and cases are immaculately crafted, but Montblanc’s have more facets and unusual details. However, we would have liked Montblanc’s case to have greater water resistance: it can withstand only 30 meters, while Jaeger-LeCoultre’s case remains watertight to 50 meters.

Depending on the feature we were examining, we found significant differences in user-friendliness between the two chronographs. Jaeger-LeCoultre builds its classic two-button chronographs with small seconds, a stop-seconds function and a rapid-reset date display. Montblanc’s watch has a date display, as well as an additional hand to indicate the time in a second time zone and a corresponding day-night disk at 9 o’clock. These extras give Montblanc’s chronograph a large number of functions, but the watch lacks a continually running seconds hand and a stop-seconds function. And since it’s a monopusher chronograph, when it’s used to measure brief intervals, it doesn’t allow additive timing; instead, the start, stop and return-to-zero functions must follow one another in sequence.

Montblanc’s crown is also a bit hard to pull out because your fingertips tend to slide off of it. The size of the chrono push-piece, on the left side of the case, adds user-friendliness, but it takes so little effort to trigger its “stop” function that you may accidentally end the measurement of an interval sooner than you intended.

The second time zone is shown in 12-hour rather than 24-hour format, which has advantages and disadvantages. The 12-hour orbit allows the additional hour hand to be hidden behind the main hour hand when the watch is in your home time zone. But problems can arise when you try to decipher the accompanying day-night display, which is entirely white from noon to 6 p.m. and deep blue from midnight to 6 a.m. Both blue and white sections can be seen inside the window at all other times. This means that when it’s 7 o’clock in the evening (as seen in the photo at the beginning of this article), you might mistakenly assume that it’s early morning in your home time zone: the white disk seems to be sweeping the last remnant of blue night under the lower border of the window, but, in fact, the blue disk is actually turning upward into view to herald evening’s arrival.