With the launch of its Unico movement, Hublot became a manufacture. In this in-depth review we find out how the Unico performs inside the brand’s King Power Unico All Black. Scroll down to read the full article, with stunning visuals by Zuckerfabrik Fotodesign. Click on the pictures for larger images.

Hublot’s path to manufacture status was an unusual one. In 2007, three years after becoming the brand’s CEO, Jean-Claude Biver decided to make an in-house movement. Because Hublot had limited production capacity, he planned to make no more than 2,000 or so pieces per year of the caliber, which he dubbed “Unico.” But when the Swiss movement maker BNB Concept went bankrupt in early 2010, his plans changed. Hublot bought BNB’s machinery (and hired 30 of its watchmakers), and suddenly had the capacity to manufacture some 20,000 Unico movements per year. To make the shift from small-series production, 80 percent of the movement had to be redesigned. This caused a delay of several months between March 2010, when Biver first introduced the movement, and the time when the finished version was ready for its stepped-up production runs.

The movement, Caliber HUB 1240 Unico, made its debut in the King Power watch. With an impressive diameter of 48 mm, the watch made a very big splash in our editorial office. The piece we borrowed to review was a member of the 500-piece All Black limited series (it was, in fact, the very first piece in the series). Opinions about it were mixed. “Much too big” was the verdict of some editors. “Too expensive,” others said. Comments such as “barely legible” and “drearily dark” were also heard. But let’s not be hasty. This article may shed a different light on this big watch. 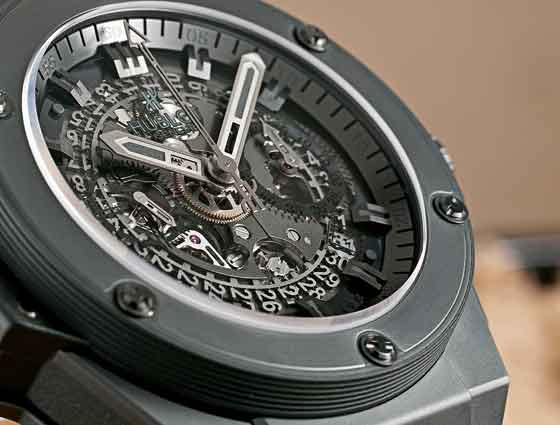 The uncommonly large King Power case was created especially for the Unico caliber. Although the watch’s stated case diameter is 48 mm, the watch actually measures well over 50 mm when measured across the crown or across the lugs. The watch is 17.6 mm thick. It embodies the brand’s concept of “fusion,” the combination of different and often unusual materials in the same watch, which Biver introduced with the launch of the Big Bang in 2005. The watch also illustrates Hublot’s fondness for avant-garde styling.

Considering the size of this gigantic watch, its weight, 161 grams, really isn’t that great because the case incorporates some lightweight materials. There are black composite resin insets on the case sides, while titanium is used for the crown and push-pieces. The case’s body and back are made of micro-blasted ceramic. The watch’s porthole-like appearance (hublot is French for “porthole”) is created by the case’s lateral protuberances and by the six H-shaped, black-PVD-coated titanium screws that fasten the bezel. Some connoisseurs are annoyed by the random orientation of the slits in these screws’ heads, but Biver calls this “authenticity.” After all, a screw must be tightened until it’s firmly seated, not merely until the slit in its head is tangent to an imagined circle. Only the Audemars Piguet Royal Oak accomplishes both. The King Power’s screws hold the ceramic bezel, which is overlaid with black rubber and surrounds a sapphire crystal  that’s nonreflective on both sides. A second pane of sapphire is integrated into the caseback, where a second set of six polished H-screws fasten the back to the case. This design element is also found on Hublot’s distinctive integrated and screwed lugs, on the sides of the case at 3 o’clock and 9 o’clock, and on the black titanium-ceramic clasp.

The single-hinged folding clasp is shaped like the Hublot “H” logo. A double prong holds the longer part of the large rubber strap to the end of the clasp. The strap fits securely thanks to two prongs of unequal length. The clasp snaps smartly shut and opens when you press two lateral buttons. The lugs and the rubber strap are hallmarks of Hublot, but they’ve undergone a complete metamorphosis here. The strap can now be adjusted (it formerly had to be cut to the size of the wearer’s wrist). It’s also much thicker than the original strap and it’s smooth only on its inner surface. On the outside it’s deeply textured with a pattern recalling the tracks of an armored tank — a fitting choice for the muscular-looking King Power.

The strap, lugs and clasp collaborate to ensure that the King Power remains securely fastened on your wrist. Despite this watch’s size, it fits snugly, isn’t top- heavy, and doesn’t slide toward your hand. The operating buttons have non-slip rubber tops on titanium elements coated with black PVD. The winding crown is well protected but is nonetheless easy to grasp and pull out when you need to adjust the date or set the hands. Ribbed covers on the chronograph’s angular push-pieces ensure that the stopwatch functions can be activated quickly.

The movement can be finely adjusted using a two-part index system: specially designed and well executed, this system is quite effective, as is shown by the watch’s good rate performance. The stability of the rate is further enhanced by the escape wheel and the pallets, which are made from high-tech silicon, a low-wear and extremely resistant material. We measured an average daily gain of 4.3 seconds when we first placed the fully wound watch on an electronic timing machine; the daily gain decreased to 3.7 seconds 24 hours later. The amplitudes were relatively high, but remained stable even after the power reserve had been allowed to decline somewhat. The King Power performed better on the wrist. We wore the watch for several weeks and measured a daily gain of just 1.6 seconds. It also maintained this good performance with the chronograph switched on, which means you could leave the chronograph running all the time without sacrificing precision. The watch has a power reserve of three days. It has bidirectional winding and its winding rotor runs on ceramic ball bearings, which need no lubrication. This first look showed that the Unico caliber performs well and runs at a stable rate. Not every function is highly legible, but the design of the first limited edition is so appealing that we’re willing to overlook the less-than-ideal legibility.