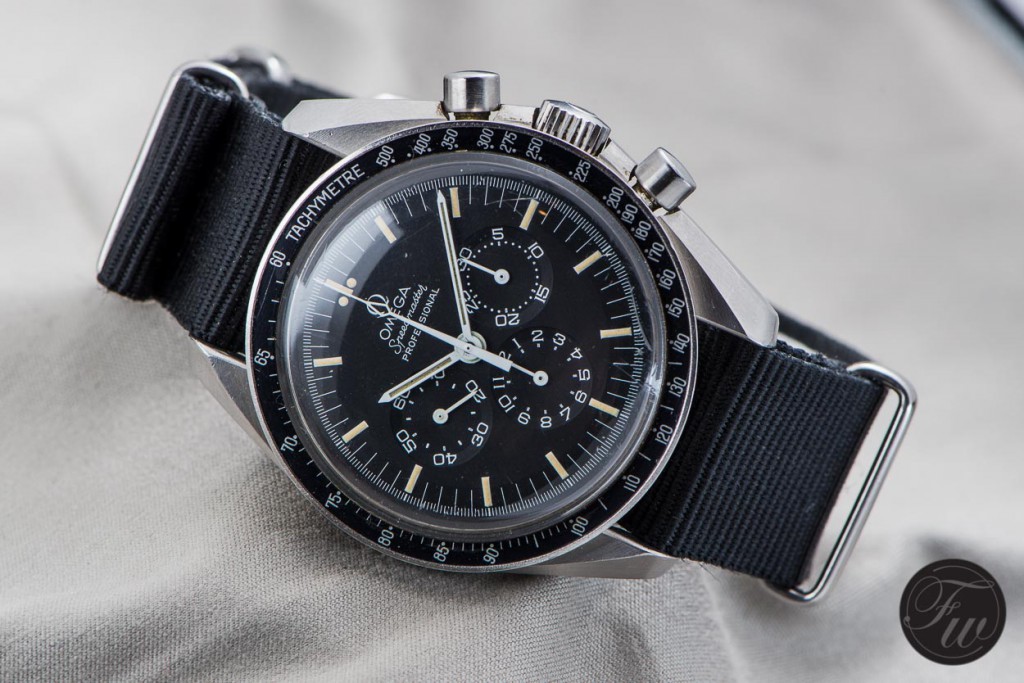 A vintage Speedmaster on its own is hard to find already these days, if you want an all original and authentic watch that is. Aside from the current prices; when I started out with buying and collecting Speedmasters over a decade ago, it wasn’t much of a problem to find a nice vintage piece with all original details. At the time, these details weren’t even as important as they are now but most of the watch I found at watch fairs, on eBay etc were all fine.

A few years ago, we reported about the NASA issued watch from astronaut Reinhard Furrer (click here for the ‘We’ve found an astronauts watch’ article). This watch (with radial dial) belonged officially to NASA and was issued to Furrer during ESA training activities in Europe (guided by NASA). One way or another, he kept the watch and years later it popped up on my kitchen table as the (then) owner didn’t know exactly what it was. We made an appointment and brought this watch to have me take a look at it.

Since I’d never seen anything like that before, I had to dive into it and needed some help from Omega luxury watch brand . It appeared to be one of the 56 NASA issued watches that were delivered by Omega in 1978. This delivery was the result of a new tender by NASA for watches to be used for the Space Shuttle program that was about to start. This particular Speedmaster Professional radial dial model was also referred to as Project Alaska III (1978). All projects that Omega did for NASA were referred to as “Alaska”. This is confusing some times as most people refer to it as the white dial Speedmaster that Omega did around 1969/1970 (Alaska Project I, also for NASA) and the later (2008) modern white dial re-edition.

The watch we have here for you today, the 1978 Omega Speedmaster Professional radial dial, was never issued to NASA as it was a prototype. It was used as a spare watch on request by NASA. NASA only ordered 56 watches, engraved with NASA’s own internal (coded) serial number and reference number (SED12100312-301).

I’ve been informed though, that Omega made a total of 60 cases and 100 dials. The remaining 4 cases were kept in Switzerland as prototypes or perhaps as replacement in case one of the 56 issued Speedmaster watches would be damaged to an extent it would become unusable.

If you’ve been strolling on the interwebs, followed auctions etc. you might have seen the use of radial dials in non-NASA issued Speedmasters, or prototypes. The story goes that an Italian Omega distributor bought 40 of these dials back in the day, and put them into 145.022-69 cases. So these watches do not have the clean Seahorse-only case back with a NASA number (SED12100312-301) engraved, like this Speedmaster Professional radial dial we have here.

The nicely discolored (or aged) tritium on the hour markers give it this nice vintage look, as well as the hands with discolored tritium, or what’s left of it.

The small sub dials have this clear grain motifs and the printing is slightly different than on other Speedmaster dials. The small minute counter has dots as markers, the hour counter has two small bars and the minute counter shows rectangular shaped indexes, both filled and ‘frames’.

On one of the images above (and below, in the gallery) you will see that the case back has the NASA SED12100312-301 inscription and the Star Watch Case company symbol. This watch uses the proven Lemania caliber 1873, also known as Omega caliber 861. A solid and reliable movement that has been used since 1968 by Omega for their Speedmaster until today (which is an updated and modernized version, Omega caliber 1861).