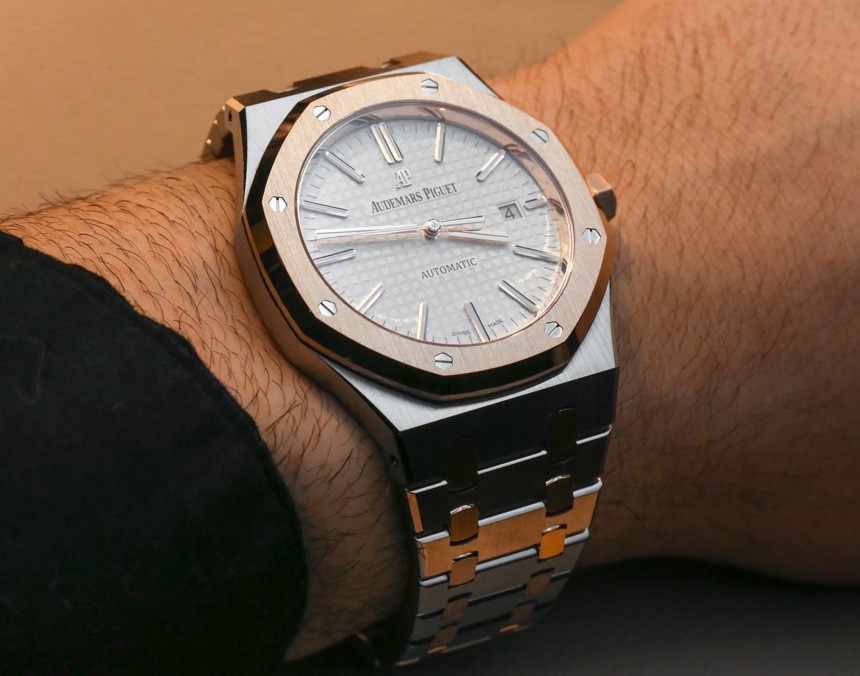 One of my all-time favorite watches is the Royal Oak. It is actually one of the models that got me into mechanical watches in the mid-1990s. Love at first sight, you could say, and as you know that is something to cherish. However, these watches come at a certain price and with those perpetual annual price increases these watches seem to be only available for the lucky few. The low production number and high demand for them – by the lucky few – enables Audemars Piguet to stay exclusive and only available for those who are able – and willing – to spend so much money on their watches.

This shouldn’t come as a shock, as Audemars Piguet luxury watch brand  was always high-end and the stainless steel 1972 Royal Oak 5402 model was said to be as expensive as 10 Rolex Submariner watches. It took me quite a while to actually purchase a Royal Oak and I had to make quite some sacrifices. My first Royal Oak was the 15300ST with a silvery-white dial that I traded later on for a pre-owned Royal Oak 15202ST ‘Jumbo’ with the famous caliber 2121 movement from 2006. For me, that’s the pinnacle of Royal Oak models, although Audemars Piguet themselves might think differently about this. Their former designer, Octavio Garcia, re-designed it a bit in 2012 for the 40th anniversary of the Royal Oak, with great success. The new version has a dial that looks a bit more similar to the first references and the bracelet has been updated a bit as well. The prices on the former 15202 execution (the model I have) went up quite a bit as well, which made me a bit more careful when wearing it. 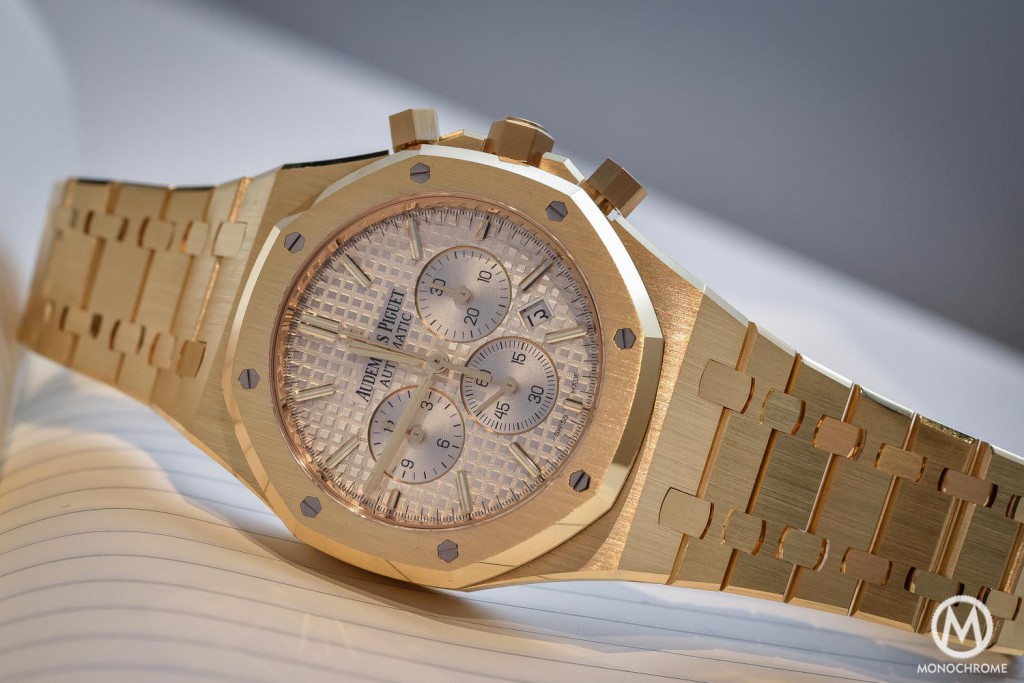 However, you and I both know that a brand can’t live of one specific reference. Even though sometimes we would like to see that happening. Customers want choices and options, like they do when buying a car.

This year, Audemars Piguet treated us with a lot of gold for their Royal Oak models. Purists might have frowned a bit when seeing them during the SIHH in Geneva, as Gérald Genta mission was to design a luxury sports watch in stainless steel. But again, people need to be able to make choices and not everyone is a purist. Neither are journalists and editors like us or those from any of the other on-line watch magazines or blogs representative for the majority of watch buyers.

That said, and already having the stainless steel Jumbo/Extra-Thin Royal Oak with caliber 2121 in my personal collection, gold does give the Royal Oak something special. It seems that the stunning brushed finish combined with polished facets on case and bracelet does extra well with gold. As Audemars Piguet states on their website “The new collection of Royal Oak watches and chronographs glows with the solar energy of yellow gold, the universal emblem of beauty, energy and light.”.
Audemars Piguet Royal Oak Gold

“To break the rules, you must first master them” and you could say that Audemars Piguet perfectly mastered the Royal Oak in stainless steel. So let’s move on to have a look at the new gold collection of Royal Oak watches. Audemars Piguet decided to introduce a number of references in gold, from the 37mm Royal Oak Selfwinding up to the stunning 41mm Royal Oak Perpetual Calendar and Royal Oak Double Balance Wheel Openworked.

The first Audemars Piguet Royal Oak gold watch I’d like to start with is the 37mm “Selfwinding” model. I actually don’t get the “Selfwinding” name, as most of these models are selfwinding anyway. I vaguely remember that the – now discontinued – 15300 was in the catalog as “Royal Oak Date”, which makes more sense as all the other models are also referred to by their complication(s). Well, perhaps new insights led to the “Selfwinding” name for this model. This model is available with a blue dial, as pictured here or with a silver dial. I personally love the combination of blue and yellow gold.

The Audemars Piguet Royal Oak Chronograph is one of the models I like best, next tot the 15202. I had one in my personal collection as well a few years ago, the previous reference in 39mm (26300ST). Although I feel that the 39mm version had a better ratio for its dimensions, the 41mm size is more actual or up-to-date to today’s standards.

The only thing that I have issues with is the large and bold printing of ‘Audemars Piguet’ on the dial. This used to be a bit more modest, which I personally like. No need to scream ‘Audemars Piguet’ from the rooftops as everyone knows it is one, by the shape. You can recognize an Audemars Piguet from a mile’s distance, so I don’t get this. The Audemars Piguet Royal Oak gold chronograph is however, a wonderful piece with the dials in silver and blue.