There are many good reasons that IWC is perceived as one of the greatest watch brands of all time. Here I have chosen our top ten favorite IWCs was a difficult task because there are so many good ones to pick from, but we ultimately ended up with these. We chose to focus on models that are currently available, and for longevity’s sake, particularly models that are not limited editions. Join us as we delve into our top ten IWCs and explain why they’re our favorites.

Big Pilot, one of the most iconic watches IWC produces is its famous, indeed legendary. The name’s a bit on the nose, but setting that aside, what you’re left with is one of the all-time great tool watches. It is what it says it is, namely big, at 46mm, but none of that space is wasted, either in terms of its massive 51111 movement or its huge dial. The crystal is even secured from popping out due to drops in air pressure.

Because it is an old school tool watch, you can’t see the in-house movement, but it’s quite an impressive work of horology nonetheless. As its power reserve complication would imply, it has a 7 day power reserve, but that’s hardly its only claim to fame. It’s also designed to carry many of the features long associated with high-end watches. For instance, it’s got a free sprung balance and Breguet overcoil. The back of the watch also contains a soft-iron core for magnetic protection.

The Big Pilot isn’t the only IWC Pilot’s Watch that made the list, however. This Spitfire Annual Calendar is part of a group of in-house annual calendars from IWC, but we think it’s the coolest incarnation of them all. We love the silver sunburst dial and there’s something about the symmetry here that just makes it work.

Unlike the regular Big Pilot, the Big Pilot Annual Calendar lets you view the gorgeous in-house movement. IWC is simply the king when it comes to filling a case back, and despite the large 46mm case size, they manage to do the same here. Just like the regular Big Pilot, the Annual Calendar is host to a wide variety of high-end features, but adds not only an annual calendar complication, but also day and month windows.

Our first favorite from the Ingenieur collection is the basic Ingenieur Automatic. Like every IWC collection, there are extremely complex, and therefore expensive, models available, but we think that few Ingenieur models better represent the all-business tool watch mentality than this simple, and affordable, Automatic.

Like all good engineer’s watches, it is antimagnetic, thanks to its soft-iron core. It’s also surprisingly water resistant at 120 meters.

But for us, what makes it great is its simple Genta styling. In fact, I think it’s one of his best looking designs. That said, it was a tough decision between this and IWC’s AMG Black with its cool ceramic case, as well as the Laureus’ blue dial. You really can’t go wrong with any of the Ingenieur Automatics.

The Aquatimer family is one of IWC’s most popular, and it was very hard to pick favorites from it. For our first favorite, we had to choose between the basic Aquatimer Automatic, which is an excellent value. We decided to go with the 2000 for a few reasons. For one, we prefer its 80110 movement, but for another we just think it looks cooler, thanks to its more highly stylized case and dial. It reminds me, in a good way, a bit of the Patek Nautilus, and also the Omega Aqua Terra with its teak dial.

Naturally, a hardcore diver like this is large, at 46mm, but lighter than you might expect thanks to its titanium construction. Most importantly, it is rated for an astonishing 2000 meters of water resistance, very far beyond what the wearer of this watch is rated for.

Our second Aquatimer pick is less conventional, but at least as cool. This is the Aquatimer Deep Three, and while it’s not even close to as water resistant as the Aquatimer 2000, it has a very cool trick up its sleeve: a depth gauge. It’s not some simple gimmick, either. It actually features two separate measurements, a real-time depth gauge and a maximum depth gauge that stays at the deepest point you reached until it is reset.

The 46mm case is titanium, just like the Aquatimer 2000, although it’s rated for a relatively ordinary 100 meters. IWC says that the Deep Three is intended to be a backup system to a dive computer and has apparently stuck to depths that recreational divers might actually achieve. I’ll certainly never reach anything close to its limits, but I would enjoy how good it looks every day I wore it.

For reasons that escape me, Portofino is not one of IWC’s most popular collections. It is, however, one of my personal favorites. As such, choosing just one to make our top ten list was difficult. As frequent readers of our Timeless reviews will know, I have a preference for manual winding watches to begin with, but what really makes this watch for me is its unique asymmetrical dial. I love the avant garde power reserve at 9:00, balanced against a date at the very edge of 3:00.

Still, it cannot be denied that the gorgeous Cal. 59210 is a big reason why I like it so much. For one thing, it’s absolutely huge, filling the large 45mm case with ease. But for another, it has an amazing 8 day power reserve, thanks to a going barrel that’s almost as big some whole movements. There’s really nothing that looks quite like it. Like other members of the Cal. 50000 family, it employs what is essentially a checklist of high-end movement features, but unlike some of its brethren, it beats at 28,800 BPH.

And now we finally arrive at what many IWC fans, myself included, consider to be the brand’s most revered collection: Portuguese. We’ll start with the dressiest watch of our top ten, the Portugieser Hand-Wound Eight Days. While it may be mechanically similar to the Portofino, is has almost nothing in common aesthetically. The Portuguese version has a much cleaner dial (but loses no functionality, we’ll get to that in a moment), using only a date and seconds subdial. The size is a little more versatile too at 43 millimeters. In terms of color, I had a tough time picking between this black IW510202 and the white IW510203, but I went with the black because I felt it was the dressiest of the two.

What would an IWC top ten list be without at least one haute horology piece. IWC is unique in many ways, one of which is that they offer extremely complex movements throughout their collections, including watches that are more often austere, like pilot’s and engineer’s watches.  I say simple because there are even more complex double moon and minute repeater versions of the watch. Owners of this particular model, the IW503302, must make do with only perpetual calendar, moon phase, year, month, day, date and power reserve complications.

As you might expect, the movement is as impressive horologically as it is aesthetically. It’s got a solid red gold rotor which is as much there for its mass as it is for its good looks. The top plate has been heavily skeletonized to reveal the incredibly complex workings within. Although perpetual calendars are watches that are marketed on their complications, sometimes skimping on the actual timekeeping components, this is not so with the Cal. 52610. It features an incredible 7 day power reserve, IWC’s unique Pellaton winding system, a free sprung balance and a Breguet overcoil, among other high-end watchmaking tricks.

Finally we arrive at my all-time favorite IWC, the Portuguese Automatic. If I was to wear only one IWC for the rest of my life, it’d be this one. I love the blued hands and numerals. I love the symmetrical subdials that, thanks to a dash of red, are actually more avant garde than they first appear. I love that it has a power reserve. I especially love that no numerals are cut off.

The Portuguese Automatic’s movement has long been on the forefront of IWC, but it was fairly recently updated to be even better. It has incorporated a whole host of improvements, although we’ll get to know these better in one of our Timeless reviews instead of this top ten list. Suffice it to say that, on top of its seven day power reserve, this is one of the most sophisticated movements in the industry. 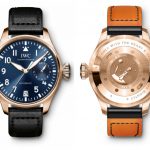