Davide Traxler was in fine form at Corum’s Baselworld press conference this year, which is understandable given that he had been awarded the title of interim CEO of Eterna watches on the eve of the exhibition’s opening day. Snappy soundbites abounded in the style of Donald Trump, whose trademark red baseball cap Mr Traxler had appropriated for the day, complete with the slogan “Make Corum Great Again”. With little in the way of good news at Baselworld, it was nice to hear that the stock of Corum’s Chinese owner, Citychamp, was the best performing watch stock in 2016 (even if it has declined so far this year, while the stocks of Swiss groups have enjoyed double-digit growth over the same period). In 2016, any watch brand that could show any sign of growth – however small – was doing well, so a whopping 38% increase in sales is something to be proud of, even if it is on the back of years of losses. Whether the claim that Corum is “the first luxury brand to understand that the biggest marketplace in the world is Amazon” (and that Eterna, unsurprisingly, was the second) carries any weight will be borne out by history and the figures announced at the all-new Baselworld 2018.

Whatever your thoughts on the above, Davide Traxler is undeniably carving out an interesting niche for Corum and I for one applaud his attempts to bring some fun into an industry that often takes itself far too seriously. I was so in tune with the vibe that I thought the Bubble Disconnected was stuck on 12:08 in real life as it was in the tongue-in-cheek promotional video and I was actually a bit disappointed to find out that it actually worked and had a functioning, old-school LED display. Whether all 999 models in the limited edition will sell (at 1,500 Swiss francs it is competing head-to-head with TAG Heuer’s latest-generation Modular 45 smart watch) is a different matter. I drew the line, however, at trying one of the blue “Bubbliagra” tablets the brand offered us. Baselworld is hard enough as it is.

The revived Bubble collection lends itself perfectly to all things fun at Corum. The new Big Bubble (at 52mm diameter, “it’s yuuge”, says Davide Traxler) literally catches the eye, with a huge Iris staring back at you through the magnifying bubble crystal on the limited edition of 88 Big Bubble Anima watches designed by Italian DJ Matteo Ceccarini. As the competition to design your own Bubble last year proved, there is no limit to the creativity you can add to this blank canvas, with new designs this year from Booba and Elisabetta Fantone extending the possibilities even further. 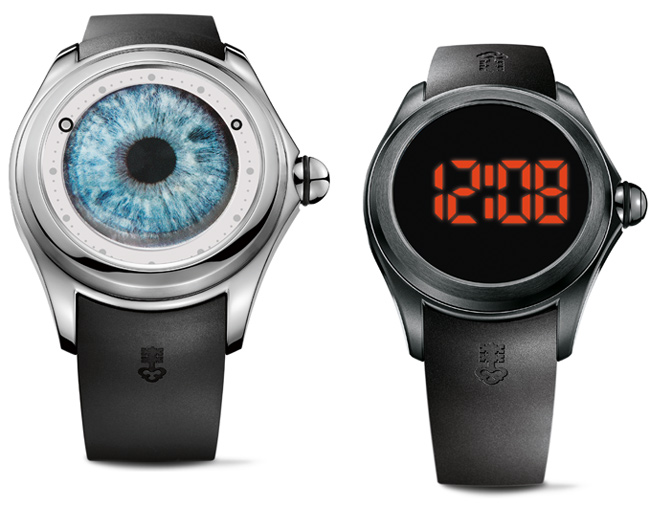 Although the lion’s share of the publicity goes to the Bubble, Corum still has its venerable Admiral’s Cup and Golden Bridge collections. The former is the guinea pig collection on sale in certain markets (Italy, Spain and the UK) on Amazon, while the latter sees a new interpretation with the rectangular and “Stream” models. These models use movements from Vaucher Manufacture, which has had a long-standing partnership with Corum that suits Davide Traxler well and is unlikely to change (“they have stuck with us through thick and thin,” he says). Together with Eterna’s in-house movement capacity, Corum certainly has no need to strive for full manufacture status.

Most of the above-mentioned new releases, however, are limited editions and will only account for a minor share of Corum’s overall sales. As is often the case, the new watches that we see showcased in Basel are just the tip of the iceberg. To boast of similar growth next year, Mr Traxler needs to sell in excess of 50 million Swiss francs worth of other watches in the Corum collection over the next 12 months.