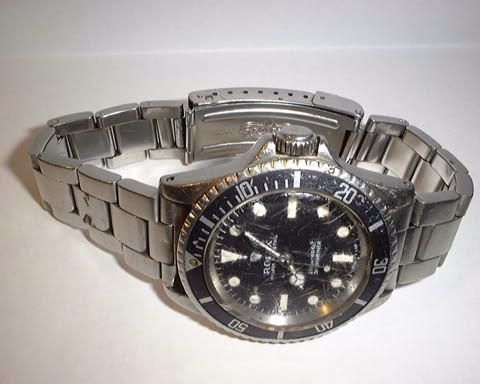 SteveB at WUS pointed us out to this thread at TimeZone, written by Jacob Hagert from Sweden.

“This is the story of my friends Submariner! The serialnumber tells me that this watch is from 67/68 and was given on his 18th birthday, it was not new but unworn! Since then it have been used everyday!

My friend works at sea as a skipper on smaller coast ships.
In 1995 he lost the watch during some engine work, at this time he bought a new one! About one year later the watch was found
lying in old spill oil & diesel under the engine!!
It was very well preserved ; ) The watch had a “sailor” service
at once, soap & autosol. Back on the wrist the very same day
working fine.”

“Epilog:
When I returned the watch I asked if he had used the new one under these couple of days?
“Yes I did, but I took it off after one hour, the bracelet is stiff and uncomfortable”

in a few seconds was the old favorite back on his wrist!
“

Click here for more pictures and the full story