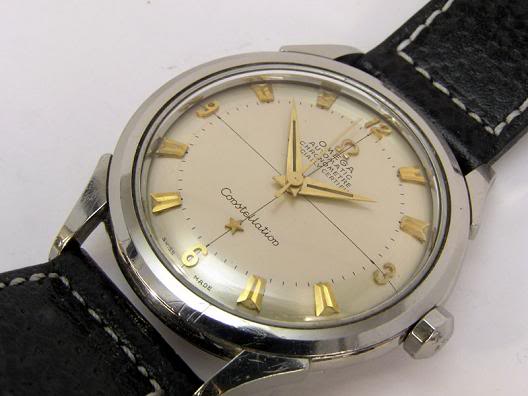 ..this fabulous Omega Constellation of the first generation (thus with automatic bumper movement). I sold my own caliber 501 Constellation (first ‘regular’ automatic movement model) a while ago, and these pictures make me almost want it back. However, these watches are just a bit too small for my wrists, so it would (and it didn’t) never get any wrist time

The first Constellation saw life in 1952, and was considered to be Omega’s flagship model for a long, long time. Until recently, the DeVille Co-Axial models took this role from the Constellation line. Personally I would prefer the caliber 55x movement, because of the availability of spare parts. The production of these caliber 55x models was a bit later though, late 50s to the 60s. Anyway, great watch!!

Per K wrote a small review on this watch here.