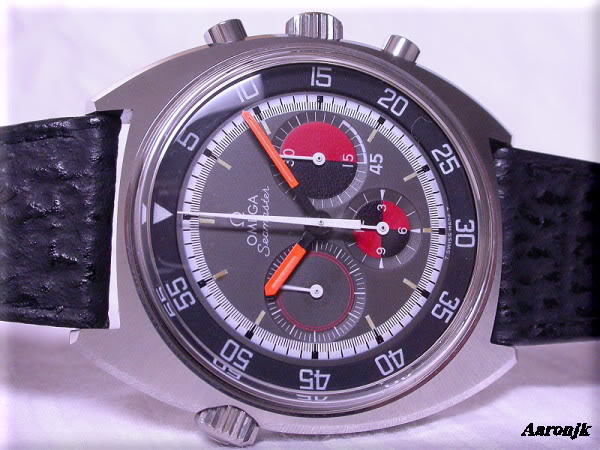 A Seamaster Chronograph with caliber 861 (based on Lemania caliber 1871). I love this model btw, with those colored sub dials.

Not long after AaronJK’s original post in the forum, ‘quatre_temps’ posts his version of this vintage 1970 Seamaster Chronograph with ‘roulette wheel’. I had never seen this one before. Very nice!

And before rounding up this post, I will add in another vintage (and ‘rare’) Omega watch today. JBagnall posted the following text on the Omega Forum at TimeZone:

“This watch has been in my family for 36 yrs. Originally purchased for my Father in 1969 is a true World Traveller. With the possible exception of South America it has been on every Continent. It has taken a ride on a Yak in Nepal, been on Safari in Africa, survived 4 Monsoon seasons in India, by Motorcycle has traversed the North American continent no less than 5 times and travelled through all of Western Europe. It has survived Fog, Rain and Snow on numerous Motorcycle trips, all told somewhere in the region of 200,000km’s. The watch carries a 930cal (modified 861cal)that dispenses with the 12hr counter in favour of a Date Window. “

Although it seems that the bracelet and case do not match (case is probably doubl?© or at least not 14Kt gold, and the bracelet probably is 14kt gold), it is a marvelous watch! Although I am not a fan of gold, I would wear this without a doubt. Probably on a nice brown croco leather strap! The best thing ofcourse, is the story behind this watch that makes it so special.