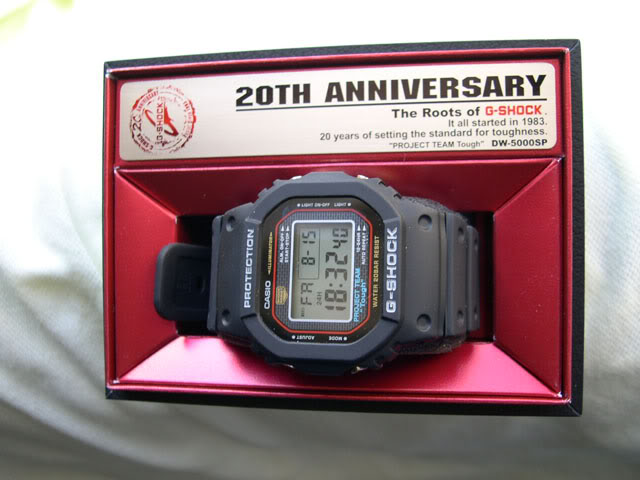 Two days ago, I turned 29 years old (to help you out, I was released in 1977). When I was a young kid, I remember getting a hand wound watch from my parents. But I never wore it. It had a small round case and a canvas strap. My first ‘real’ watch that I really wore was a Casio. It was in the time of the first G-Shocks. But these G-Shock models were too big for my little wrists (I was a skinny little kid, almost hard to believe now.. :-)). I also remember getting my first Casio as well. My parents bought it from me when we were on a holiday in the UK. I think they had it for sale at Dixons. Not sure though. I still have it, and it even runs perfectly. After that first Casio, I had some more digital watches. I also remember that I always looked at watches from other kids. One of my friends had one with a video game. Another one had one which could measure your pulse rate. And I still remember buying a digital watch featuring a calculator. Everyone had one. Anyway, when it became 1989 or something, I needed a Swatch. And that was the end of my Casio era

A few years back (2003), I bought this Casio G-Shock re-edition. It is a ‘re-edition’ of the first model G-Shock. Exactly the same one as I witnessed in the windows of ‘Dixons’ (or similair store) in the UK. With a bit of help of the G-Shock Forum, I pushed myself to buy this one. I think I paid a mere 150 USD for it.

So I now have 2 Casio watches. My first original one, and this re-edition of the G-Shock. I probably have more of them in a box at my father’s house somewhere, but I am not going to look for them anyway

Anyway, maybe because I am from the Digital Generation :-), but I always have a weakness for nice digital watches. Although I probably will never buy them (the 150 USD was more then enough to spend for me on a digital watch), I really like the Omega Speedmaster X-33 for instance. Or the Breitling Aerospace on a brown leather croco strap. Also, the Seamaster series from the early eighties called ‘Multifunction’ were quite nice.

Recently, I started to like the digital Ventura watches. The design is original, and the scroll button is quite intuitive. However, at a starting price around 1000 USD, I will leave this one alone as well. It would probably end up in the same drawer as my two other digital watches. Although you never know…