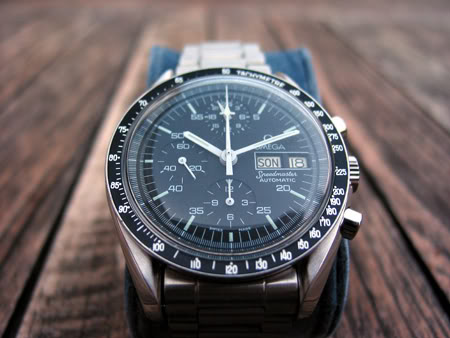 Omega’s holy grail retailed in 1987 for around 1500DM, as much as 750 Euro. Probably no-one would have guessed it would become the Holy Grail of Speedmasters. Chuck Maddox and Alexander Monkowius, amongst others, wrote in great detail about this watch. The Speedmaster Automatic ref. ST376.0822.

Once in a while you seem them for sale at a watch fair, watch auction or at one of the online sales corners. However, most of the time they probably change owners within a blink of the eye. This watch is wanted! Why? Because it basically houses in the classic Speedmaster Pro case and is powered by the classic chronograph movement caliber 1045. As a regular Fratello reader, you probably know that this caliber is based on the discontinued Lemania 5100 movement. A very succesful formula (as it seems now), but only produced for less than 2 years.

A while back, this watch went for sale in the sales corner over at ‘Das Rolex Forum‘ for a mere 2500 euros. About the price of a new Speedmaster Professional without any %’s off. However, this Holy Grail was completely revised by Omega in 2006. As good as it gets!

Whoever bought it, congratulations!!