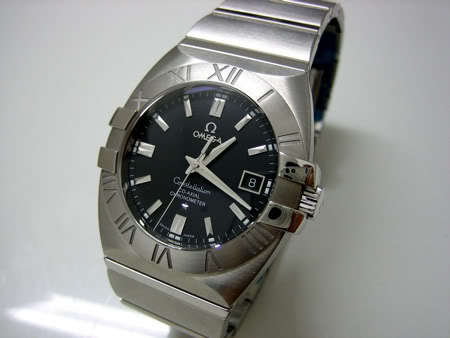 The Omega Constellation Double Eagle model has been the biggest change of the Constellation line since 1982. Before that, only the 1952-1969 era counts. In the 70s there was no real clear and defined Constellation design. The Manhattan series, which seems to be some kind of¬’code name’ for the post-1982 Constellation models, didn’t change much until 1995. Most post-Constellation series were referred to as Constellation95 models. Not too long ago, Omega did some restyling and admitted to the big & bold hype of most other brands out there. Although it is hard to think of it as a hype anymore. Big watches are here to stay, maybe next to smaller watches again.. but definately no hype (or fad)..

A TimeZoner by the name of mjb, published a small pictorial of the Omega Constellation Double Eagle in the Omega Forum. This Double Eagle has the co-axial movement, based on Omega caliber 2500B (based on the ETA 2892-A2).