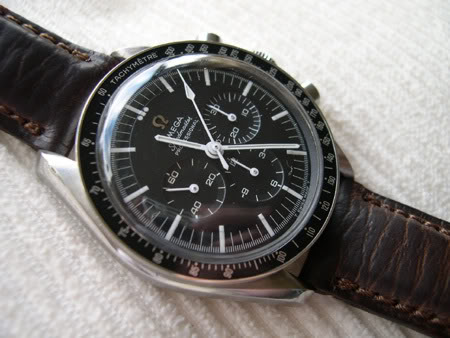 My Speedmaster Professional (ref.145.012-67) has returned. It came back from a repair and restoration. The chronograph secondhand has been replaced, because the original one was a little rusty. The main spring has been replaced, because it broke down. The authorized Omega dealer had some struggle to get the correct parts on this one, because the caliber 321 movement is a bit dated and parts are hard to get as it seems. Anyway, after almost 2 months of waiting, the watch returned in crisp condition. Working smoothly again, and with the fresh chronograph secondhand on it, it looks like new! Yesterday evening, I exchanged the ref.1450 bracelet for a nice Officina Italia Bros Dakota series strap and couldn’t stop staring at the watch… After months of almost non-stop Panerai and Rolex wearing, it is time to give this beauty some serious wrist time again.

A big thank you for the German authorized dealer who took such great care of it. Their in house watchmaker did a very nice job!