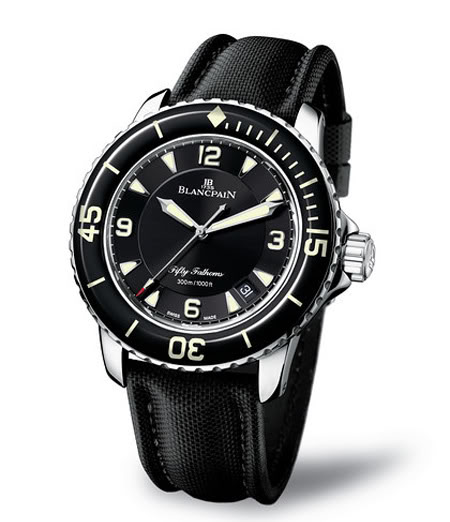 As promised, the summary of the Basel 2007 expo. I am looking forward to the SIHH 2007 expo as well, which started today in Geneva. A number of interesting watches are about to be introduced there.

Blancpain Fifthy Fathoms with new movement, caliber 1315. The watch diameter is 45mm and has a power reserve of six days.

I already mentioned some news about Rolex, but want to add this new model called Milgauss (116400). There have been Milgauss watches before in the past, but Rolex decided to re-introduce it to their line of watches. This watch has a 40mm watch case and a rather interesting dial design. The ‘lightning’ second hand reminds us of the history of this watch! Prices will be from (+/-) 4400 Euro and up for the different Milgauss-models. Movement is inhouse caliber 3131.

Longines also introduced a number of new models, but their Legend Diver is getting a lot of ‘ooohs’ and ‘aaaahs’. This model should remind us of diver watches from the past. This 42mm watch has Longines caliber L633 which is based on the solid ETA 2824 movement. This watch is water resistant to a depth of 300 meters and therefor can compete with all time classics like the Submariner and the Seamaster. I think that Longines is heading in the good direction

I was never a fan of the Breitling SuperOcean series, but it looks like that is going to change with their latest addition. Also a model that seems to be based on one of their historic models. It will become available in 38mm as well as in 46mm. Each model has its own caliber (17 for the largest model and 37 for the smaller model) but both will be COSC-certified.

The Breguet Toubillon Messidor is an interesting watch in the high-end segment of watches. Although I am not convinced by the use of a tourbillon complication, it is nice to look at anyway

This watch measures 40mm in diameter and is made out of 18k rose gold.

Glashuette is introducing a number of new models, among them is this Senator Rattrapante with the manual wound inhouse caliber 99. The platinum case is 42mm in diameter. This watch feature, like the name already revealed, a split-second chronograph. Love the red hand.

IWC introduced a few new DaVinci models. Even as a regular IWC basher, I have to say that I really like this model. The one with the moonphase is the ref. 3762. A limited edition of 500 pieces in 18kt rose gold, 50 in white gold and 50 in platinum. Movement is the?Ç¬inhouse caliber 79261. The case measures 43mm X 15mm and is water resistant to 30 meters.
?Ç¬

As you can see, the big watches hype isn’t over yet, like some criticals had thought. If you want to see a more detailed and completer overview of the Basel Watch Expo, click here for the Basel 2007 Forum over at TZ.