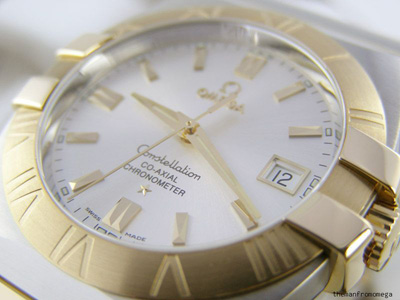 This year, 2007, is the 25th anniversary of the current Omega Constellation model. It all started in 1952 of course, but in 1982 Omega had enough of all those different 1970s Constellations and introduced this ‘Manhattan’ model to get the Constellation back on the map again. After 25 years, a lot changed, but the original ‘Manhattan’ design is still recognizable!

The classic Omega Constellation pie-pan models from the 1950s and early 1960s are covered by numerous articles in books, magazines and on the internet. The current Constellation though, gets less attention, except for the Asian countries, where this model seems to be very popular. The current Constellation find its roots in 1982. The year when Philips and Sony introduces the Compact Disc, the Falklands War was fought, Jimmy Connors wins Wimbledon, the first emoticon was used :-),E.T. paid us a visit and when I turned 5 years old. The Constellation, as it is being in the Omega catalog now, is 25 years old this year. One can say that this makes it a classic!

Let’s start at the beginning though! The first Omega Constellation was introduced in 1952, with a caliber 354 movement. This was an automatic movement, with a so called bumper rotor. The dial on this watch is often referred to as ‘pie-pan’, because it looks like one (upside down though). As simple as that. The caliber 354 movement was replaced in 1956 by a caliber 5xx movement featuring a full rotor.

The early Constellations as described above, are very popular amongst collectors of vintage watches. The used movements play a big role in this, because these were outstanding timekeepers! All Constellations from that era were certified chronometers and at one time, exceeded the number of chronometer certified Rolex watches.

In the 1970s, the legendary ‘pie-pan’ came to an end and made room for the typical chunky shaped watches. These 1970s Constellations are not as popular (and valuable) as the 1950s and 1960s models, but they might be very interesting for the starting collector with a limited budget. The big chunky stainless steel models will probably even look quite ‘common’ in 2007. The movements used in the 1970s models are chronometer certified as well.

In 1982, Omega introduced two new series of watches in their Constellation and Seamaster line. The new Constellation ‘Manhattan’ watch was introduced with a quartz movement with a chronometer certificate. The quartz movement, Omega caliber 1422, was based on an ETA Flatline II movement. Chronometer specifications for quartz models, are far more strict that the specifications for mechanical movements of course. The ‘Manhattan’ Constellation had an integrated bracelet, available in either stainless steel or gold/steel. The sapphire crystal was placed on top of the shiny polished black bezel and 4 little ‘claws’ held the crystal in place. The dial of the watch had applied roman numerals. In 1985, Omega also introduced the mechanical automatic version of this watch. This automatic movement, caliber 1111, was based on ETA caliber 2892-2. Chronometer certified, of course! In the years after, Omega introduced some more Manhattan models, including a day-date model and models with leather straps instead of the integrated bracelets.

The first serious update of the Manhattan took place in 1995. The rather simple and flat looking sapphire crystal was replaced by a domed one with a smaller diameter, which means that the bezel was not covered by sapphire. However, the 4 claws remained present on the bezel but lost their initial functionality. The bezel got roman numerals and were removed from the dial. The updates model had a dial with applied bâton hour markings. The movements also were updated in 1995. The automatic version had Omega caliber 1120, based on the ETA 2892-A2 movement, and the quartz version was updated with the ETA Flatline III movement.

The quartz version of the 1995 Constellation was no longer chronometer certified. The original design of 1982 was still clearly present in this 1995 update. In the second half of the 1990s, a Constellation chronograph was introduced as well. This chronograph, caliber 1270 (F.Piguet), was a piggy backing movement. The hour, minutes and seconds were driven by a mechanical movement. The additional chronograph module, was a quartz driven movement. Additionally, Omega added the Constellation Mini series, promoted by no one less than über model Cindy Crawford. From that moment on, Omega regularly uses famous models, sports people and movie stars to promote their watches. The most famous Omega ambassador is probably James Bond.

In 2003, the Constellation gets a new partner. The Constellation Double Eagle! This watch is a large version of the regular Constellation and features a co-axial caliber 2500B chronometer certified movement. The quartz version, caliber 1680, has a battery life of 5 years and a perpetual calendar. The Double Eagle measures 38mm, a lot bigger than the 33.5mm and 35.5mm diameter Constellation’95 models. Since 2004, the Double Eagle is also available as a chronograph watch. The caliber 3313 movement, based on a F.Piguet ebauche, also features the co-axial escapement and a column wheel mechanism for its chronograph functionality.

The original 1982 Constellation design is still easily recognizable in the latest models, they just received an extreme make over to fulfill the wishes of today’s customer. The Double Eagle name refers to golf, one of the sports that Omega wants to relate to.