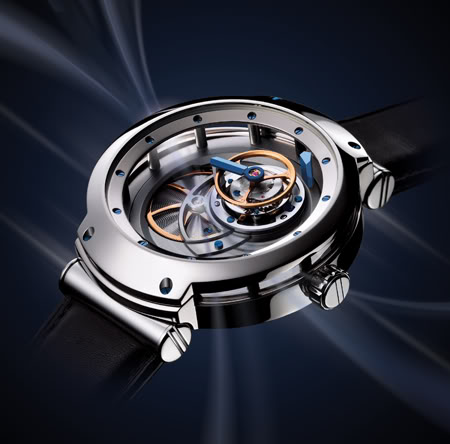 It has been almost 2 months ago, since Frank and I visited BaselWorld 2009. One of the highlights was visiting the Blu stand in Hall 2.0 on our last day there. After looking at their displayed watches for a while, I decided to go and ask for some more information about them, as I liked their style and use of precious materials. My questions about the brand were answered by Mrs. Lederer, wife of Bernhard Lederer (Blu stands for Bernhard Lederer Universum). She invited us over to a desk, to show us some watches of the Blu collection and give us some more explanation on the brand. Our discussion was mainly about materials, such as diamonds on Blu’s watches for men. When our questions became more and more technical, Mrs Lederer decided to bring in Mr. Bernhard Lederer himself, who seemed to be happy to sit with us and discuss the technical aspects of the Blu watches, especially the MT3 Majesty Tourbillon.

But before I continue, let me give me you some background information about Blu, because it is not the every day brand you read about on the internet. Bernhard Lederer (German from origin) is a qualified Master Watchmaker since 1984, and he started his own atelier called ‘Uhrenmanufaktur Lederer’ and specialized in the restoration of vintage time pieces. He also begun developing his own time pieces and in 1985, he got accepted to join the Horological Academy of Independent Watchmakers, better known as A.H.C.I. It wasn’t until the year 2000, when Bernhard Lederer found his watch brand Bernhard Lederer Universe, Blu, as we know it now. The Blu manufacture is located in Neuch?É¬¢tel, Switzerland.

During our conversation, Bernhard Lederer told us that Blu creates everything in house for the MT3 Majesty Tourbillon, with the exception of the sapphire crystal. This is the only (important) part of the watch that Blu can’t do. The shape of the sapphire crystal is very hard to get right, and even his subcontractor on the crystal had to invest a lot of time to get it done properly. This means, that every small screw, gear or disc has been produced by Blu.

It goes without saying, that Blu doesn’t have a reptile farm, so the production of leather straps is being outsourced of course

Because Blu is a small and independent watch maker (and this goes for most small independents), Bernhard Lederer does not have to make a lot of concessions when designing and creating a watch, because he doesn’t have to deal with large design departments, marketing departments, construction/R&D departments etcetera that each have their own specific interests when working on a watch. There are no internal conflicts of interest, so to speak.

Luckily, our partnersite TheTimeTV did an interview with Bernhard Lederer on video, where he explains the above in his own words. Listening to him, and looking at the watch at the same time, makes it a bit easier to understand.. However, and let me speak for myself to be save, a full understanding of the whole system is not going to happen any time soon

Unfortunately, as we did not intent to take up so much time of Bernhard Lederer, he had to run off to another appointment, so we didn’t have the chance to thank him for his wonderful explanation and time. We fully understand and thank you for your precious time!

Also thanks to TheTimeTV for the great interview on video with Blu.

For your information, the Blu MT3 Majestic Tourbillon is available starting at 205.000 Euro (price information from the 2009 Armband Uhren Katalog).