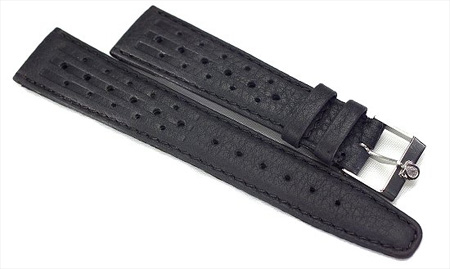 2Posted by Robert-Jan Broer on May 27, 2009Tags: Apollo, Speedmaster, strap

As you probably may know (or not), the Omega Speedmaster was introduced in 1957 as a watch for racing drivers. At least according to their own advertisements from that period (who are included in a.o. Omega SAGA). We all know the Speedmaster (pre-)Professional watches for their share in the Apollo (and current) space programs by the NASA.

Since Omega was my first introduction to serious watches, and my first proper watch was (and still have it in my collection of course) a Speedmaster Professional 145.012 from 1967, I regulary search the internet for similar watches or for accessories for this particular watch (or my 145.022 from 1969 that I also own).?Ç¬Last week I came across a vintage racing strap on eBay.com.

This Omega racing strap, a leather strap with holes (so your skin gets some fresh air?), is a nice add-on for this watch and looks good too. This type of strap was also used on the Tag Heuer Monaco for example, which is definately the ultimate racing watch

I think I paid approximately 45 euros including shipping and an original vintage Omega buckle. When it’s here, I will put some pictures online of this strap attached to my Speedy 145.012-67.

Haven’t got a clue to which Omega watch this strap originally belonged, but as long as it’s genuine and looks good, it is fine by me