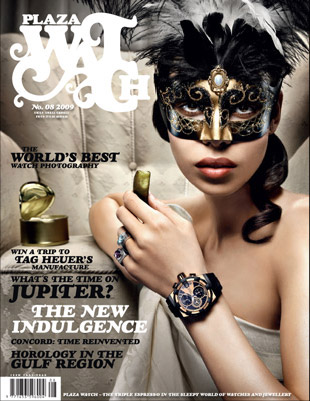 This month, FratelloWatches blog exists 5 years already! For 5 years, I have been ranting about watches, the watch industry, Basel, SIHH, watch books, accessories, boutiques, jewelers etc. etc. During the last 5 years, I have made a lot of friends in the watch business. Some of them became real friends and I am looking forward to meet more interesting (watch) people in the coming years.

Just recently, I met on-line with the people over at Plaza Watch. After a short e-mail, I received a bunch of Plaza Watch magazines at home to get an idea of their work. I was amazed, never had seen it before and the quality of the articles and photos (-wowed me-) are just terrific. I am used to the critical German magazines with endurance tests and in-depth reviews, very factual. The Dutch watch magazines are a bit more glossy, but in-depth articles are rare and photos are mainly press-kit photos that are available on the watch manufacturer’s website as well. This Plaza Watch magazine is a Swedish magazine, written in English and have a lot of incredible photo reports.

Plaza Watch started in 2006 and release 3 issues every year, one of them especially for BaselWorld, one around Christmas for the SIHH period and one in the autumn (late September). As I wrote above, their photographing is excellent, done by world class awarded photographers like Chris & Gael and Tomas Monka. As for the editorial line-up, these include famous horological editors like Elizabeth Doerr, Nicholas Foulkes, Maria Doulton and Claire Adler and more..?Ç¬ The magazine is available in 45 countries and English language only.

As Anders Modig (Editor in Chief since September 2007) mailed me, he believes that a good (watch) magazine should show true artistry of not only watchmakers, but also of photographers, illustrators and designers. Both the editors and photographers should be able to dare the industry! This shows in their magazine.

Especially for the readers of FratelloWatches, Plaza Watch gives away three subscriptions! Please respond in the comments field if you are interested in becoming a subscription in what I believe is one of the most interesting watch magazines available. I assure you that you will find yourself extending it at the end

Big thanks to Jay Gullers and Anders Modig of Plaza Watch to make this possible and for their kind and interesting e-mails.

Update! Johan, Luigi G and Roald, you are the lucky winners!