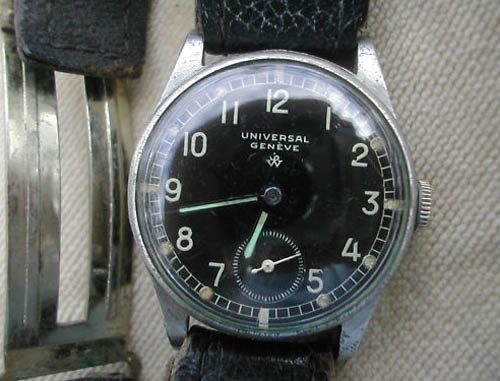 You all know Universal Geneve as a watch brand that had some great models like the tri-compax chronographs and the Polerouter model. The Polerouter has a lot of vintage watch fans, and there is even a dedicated website for this particular model (click here).

This Military Universal Geneve measures only 30mm in diameter, which is rather small for current standards. I assume only collectors of vintage military watches or Dutch military gear are interested in owning one (and probably won’t wear it often). The caseback of the watch has two numbers engraved, a serial number and a patent number.

A hand wound UG caliber 265 movement with 15 jewels was used in this watch. The watch pictured above can be found on eBay for $569 USD (click here). Also, there are a few of them available via Chrono24, ranging from 590 – 890 Euro. The price of the model on eBay is probably also quite low because of the condition of the case, as you can see on the pictures above.