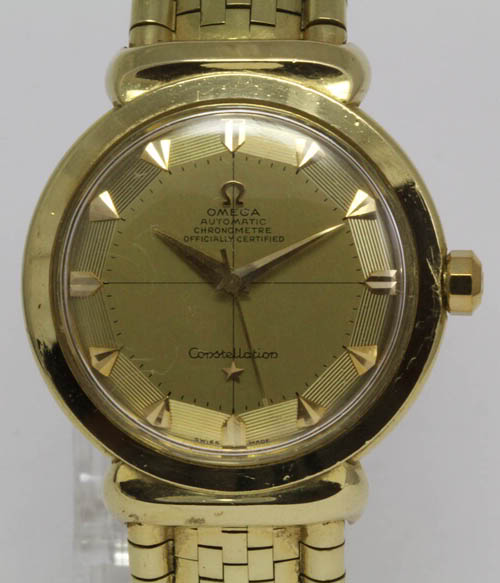 Meertz’s World of Time in Munich has a Constellation Grand Luxe for sale from the 8th of April 1957, complete with box and papers. The watch was originally bought in Wiesbaden, near Frankfurt in Germany. It was a really expensive watch in the 1950s, probably as expensive (or even more) as the Rolex Oyster Perpetual Day-Date in those days.

This ref. 2930 SC Omega Constellation Grand Luxe has a superb in-house movement caliber 505 and a massive gold pie pan dial with diamond shaped markers. The back side of the watch has the famous observatory logo with a group of stars (Constellation = a group of stars whose movement through the celestial vault is consistent and predictable). Also, the ten-sided crown of this watch is still there. I am note sure whether Omega will replace it with a similar crown during a service, but I’ve seen jewelers using ‘generic’ gold Omega crowns to replace these beauties.

Meertz in Munich asks 9.800,- EUR for this beautiful Constellation Grand Luxe 2930 SC, complete with box and papers. Comes with a 1 year warranty and 14 days right-of-return term.

More information about the Omega Constellation line-up can be found at omegamuseum.com/constellation. Also check our Facebook page for the pictures we took of the Constellations during our Omega Museum visit.

Thanks to our reader Jtk for some corrections!