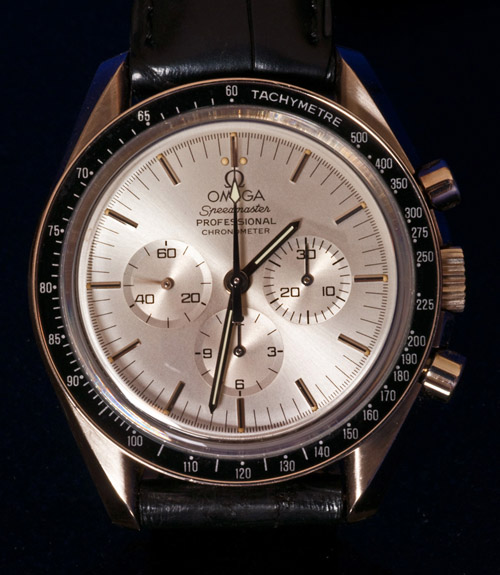 We know you’ve been waiting for Speedy Tuesday! We know we have! This week’s Speedmaster is a very rare model, a white gold 25th Anniversary Speedy that has been chronometer certified.

This Speedmaster Professional Chronometer ref. BC 148.0062 (ref. 348.0062 with the white gold bracelet) was introduced in 1994 together with a version in stainless steel and a version in platinum. The white gold version is the only one that has been chronometer certified. It is basically a caliber 861 movement but since it was regulated to become a chronometer (and received chronometer certificates), it has been numbered ‘864’. Omega also did some decorative work on this Lemania based movement.

Back to the version we are discussing here, the Speedmaster BC 148.0062. It didn’t came in the ordinary red, grey or black leather Omega box! Omega used a box in the shape of a book to present this watch to its customers! Below you see a picture of the box closed, it is not from the actual watch here but belongs to an auctioned model at Antiquorum.

There was one of these watches at the famous OmegaMania auction in 2007 and sold for 28K CHF but we think that was slightly overrated (as were a lot of prices fetched during that auction). In 2011 they sold two of these watches (leather strap version) between 10.5 and 12K CHF.

A big thanks to Richardew for this very cool Speedy!

If you have a Speedmaster and want it to be featured on Speedy Tuesday here, send a mail to: speedmaster@www.fratellowatches.com