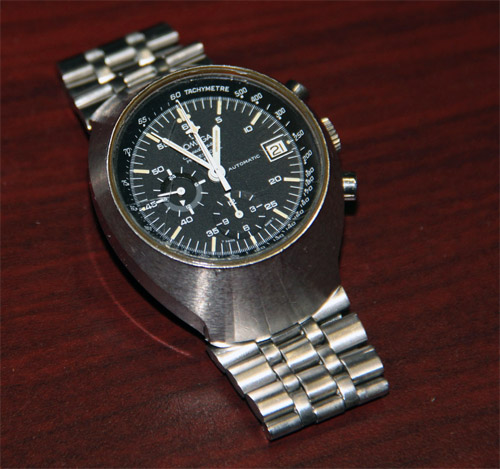 Happy New Year everyone and Happy Speedy Tuesday! We started Speedy Tuesday somewhere half-way 2012 and it has become the most popular topic here on Fratellowatches. We are very thankful for your enthusiasm and submissions! This year, we will continue our Speedy Tuesdays and will have some great Omega Speedmaster related give-aways as a sign of our appreciation to you, our readers!

The picture below is of the non-Professional version, owned by Chuck Maddox (click here for our interview with him). He wrote a wonderful article on the Mark series, click here.

Anyway, the reference number 176.002 always stayed the same. In fact, there are three different Mark III models. Six if you take the update of the word ‘Professional’ instead of ‘Automatic’ into account. The Speedy Mark III was available with three different dial colors: black (as pictured), blue (sun beam) and grey.

The dimensions of the Speedmaster Mark III are 51.6mm x 41mm x 15.9mm and the watch weighs 157.2 grams. It is the heaviest and most extreme shaped Speedmaster of the Mark-series. Picture above is taken from Old-Omegas, your source for old Omega brochures and manuals.

The Speedmaster Mark III is certainly not for the weak hearted, as its dimensions, looks and weight will certainly not suit everyone. According to its owner Santosh though, it is a great conversation maker between watch enthusiasts.