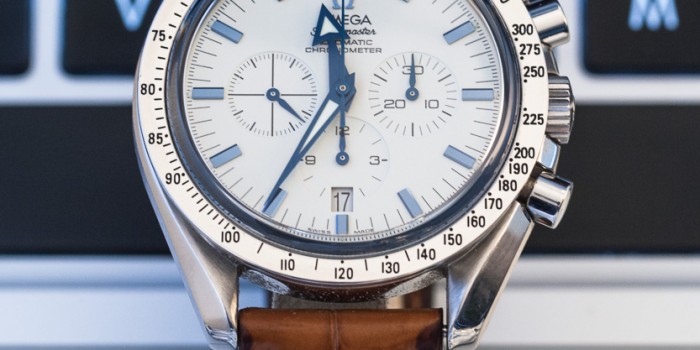 This automatic movement has been topic of several ‘heated’ discussions in those early years. What was the case? The Frederic Piguet based caliber 3303 movement had some issues with the chronograph function. A number of cases are known where the chrono hands didn’t reset properly to zero or just stopped functioning. The late Chuck Maddox was on top of it with his OMEGA caliber 33xx failure blog posts.

It seems that after a fix of the Speedy Broad Arrow or caliber 33xx movements (also used in other OMEGA watches), the watches were fully functioning again. It has been a few years since I heard of a caliber 3303 failure.

Anyway, to some, one of the reasons to not-buy an OMEGA Speedmaster Professional ‘Moonwatch’ is the hand wound movement. Winding a watch every morning – or every other day – seems to be a hassle for some people. Afraid that they will forget about winding the watch, or they just don’t like taking the time to give the crown a few spins. Where the Speedmaster Reduced filled that gap with an automatic movement, it was quite a bit smaller than the Speedy Professional.

The Speedmaster Broad Arrow (ref. 178.0022) has the almost the same case dimensions as the Speedmaster Professional, a diameter of 42mm. However, the Broad Arrow is a bit thicker due to the automatic movement. The dial also resembles the one of the Speedy Pro ‘Moonwatch’, but comes with a date aperture at 6 o’clock (also an advantage over the hand-wound Professional to some) and a bit different printing.

The sub dial at 9 o’clock, which is the regular seconds indicator, had a cross printed on it. The hands of the watch refer to the very first Broad Arrow Speedmaster of 1957, the CK2915. Besides that, the watch has the wording ‘Automatic Chronometer’ on the dial. So, this also indicates that the automatic caliber 3303 movement has been chronometer certified. Did you know that the first automatic chronometer chronograph was actually OMEGA’s Speedmaster 125 from 1973?

Also, the OMEGA logo has been applied to the dial, just like the pre-Moon Speedy till 1968.

The case back has the Seamonster logo embossed and also reads ‘Broad Arrow’. The Speedy Broad Arrow was available on leather strap (as pictured) or with a stainless steel bracelet. It was in fact the same bracelet (ref. 1998/887) as used on the regular Speedy Professional.

The combination as shown here has the original OMEGA alligator strap and folding clasp. The folding clasp is the earlier generation model, without the release buttons. These first folding clasps are known to fail at some point, but a watch maker should be able to fix this for you. You can also order the newer type of folding clasp, but this doesn’t come cheap (260 EUR). The Broad Arrow Speedmaster 178.0022 was also available with a black dial.

Currently, the Broad Arrow watches still exists as a sub-collection of the Speedmaster. It is being called the Speedmaster Broad Arrow 1957 Co-Axial, has a slightly different dial and a caliber 3313 movement with co-axial escapement.

All images can be clicked for larger versions.