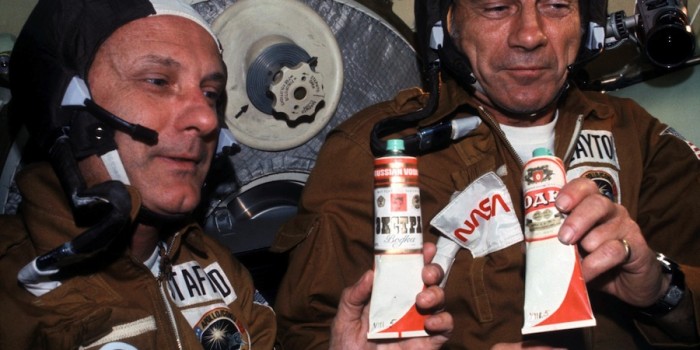 This week we have something quite special for our readers. It’s the limited edition Omega Speedmaster Professional Apollo – Soyuz reference 145.0022 that was introduced in 1975 to commemorate the first space mission where two spacecrafts from different nations docked.

With only 500 pieces made, this Speedy Pro falls into the category of very rare and collectible timepieces. The Apollo – Soyuz logo on the dial at 12 o’clock replaced the Omega symbol on the dial and the caseback has a commemorative inscription engraved with a globe in the center.

One of the German members from the OmegaForums.net platform pointed out that:

“Nobody ever really found out about how hte pieces of this edition exactly was distributed into the italian market. Obviously it is a mixture of factory/Bienne assembled watches and those assembled by Maison de Marchi/Italy (the Omega License partner of this time). In the last 38 years there has never been seen two Apollo-Soyuz with the same limited number engraved on the caseback, so the total amount of distributed watches obviously did not exceed the offical number of 500 pieces.”

The dial of this Speedy has the wonderful deep sub dials with circular grains that can be seen clearly without using a loupe. The movement used in this Speedmaster Pro is the handwound caliber 861, which is based on Lemania’s chronograph. It wasn’t until 1997 that Omega started using caliber 1861, which is only slightly different (a.o. 1 extra jewel, different finish).

As you can see on the photo above, the Speedmaster has been put on a leather ‘racing’ strap. The correct bracelet for this reference 145.0022 Apollo-Soyuz Speedmaster is 1168 with the 633 endpieces.

The contributor to this week’s Speedy Tuesday also shows a wristshot of his beloved Speedmaster Apollo-Soyuz timepiece and a photo with two other Speedmasters. A very rare CK2915-1 and a CK2915-3. Both are early pre-Professional Speedmasters and very sought-after. However, he also writes that the Speedmaster Pro Apollo-Soyuz is definitely harder to find than a CK2915. You will come across these early Speedies more often than finding one of the 500 Apollo-Soyuz models.

If you haven’t done so, make sure to join us on the 29th of October 2013. The most important Speedmaster GTG and event ever happened. With special guests from Omega and NASA (to be revealed soon), it will be a day to remember! Click http://www.fratellowatches.com/speedy-tuesday-event/ to register and read more about it.