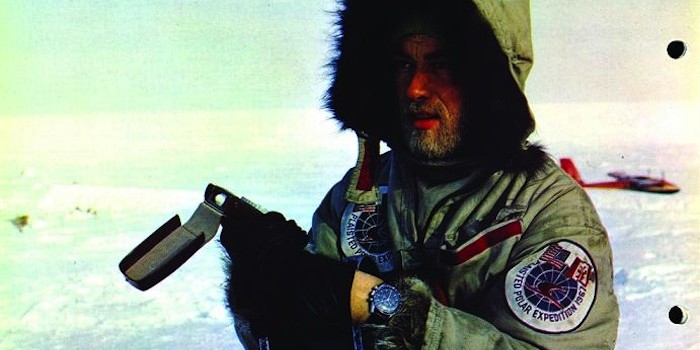 A sextant and a Speedmaster was all they had to calculate their exact position. Four brave men who had travelled for 44 days to conquer 1320 kilometres across the Polar cap reached their destination: the exact geographic North Pole at 90 degrees latitude North.

The mission was led by American explorer Ralph S. Plaisted. The other men in his team were Gerald Pitzl (navigator), Walter Pederson (the mechanical engineer) and Jean-Luc Bombardier (scout and technician). All four men were wearing an Omega Speedmaster Professional reference 145.012. The same reference that was used during the Apollo 11 mission approximately a year later.

During this mission, the crew’s Speedmasters were checked on a daily basis by radio in order to make sure that the accuracy was perfect. After the mission, the crew noted that the deviation of their Speedmaster Professional watches did not vary more than 1 second per day. Being the choice of NASA and tested rigorously with regards to temperature changes, the Speedmaster easily withstand the -52 degrees Celsius and +26 degrees Celsius (temperature in the base kitchen) temperatures during their expedition.

Just four of them have been produced for the team of Plaisted’s Polar Expedition in 1968. All four are reference 145.012 Speedmaster watches, the most common caliber 321 Speedies actually. However, what makes them different is the case back inscription that says “Plaisted Polar Expedition” and “19-4-1968″. Interesting to see that the Swiss used the European date notation for these watches meant for the USA and Canadian expedition members.

One of the four Speedmaster Pro 145.012 watches that was used during the Plaisted Polar Expedition is actually for sale. We’ve seen that it was being offered for sale before (years ago) and Hodinkee, Monochrome and The Pretense of Knowledge all reported about it when it popped up for sale (again). Also our friends of the Italian Omega fansite Master of Speed reported about it accordingly. Even Omega did a nice animated story on the Plaisted Polar Expedition on their mini site (click here and click the second patch, located below the main content).

The watch popped up again on eBay and the seller set the price to $100,000.- USD / approx. 75.000,- Euro. Unreal? Well, we’ve seen similar crazy prices for stainless steel sports watches from Rolex in the past as well. Military Submariners or COMEX divers with proven track record (or provenance) are not far away from this price tag.

The Canadian seller states that this particular watch belonged to Jean-Luc Bombardier, the technician and youngest member (29 y/o) of the group. Based on the serial number (which is the same as the movement number on Omega watches), Omega was able to confirm the authenticity of the Plaisted Polar Expedition Speedmaster.

As you can see on the pictures above, the bracelet isn’t an original Speedmaster bracelet but a beads of rice type of bracelet. We normally see this type of bracelet on vintage Seamaster watches from the 1960s or even on Constellations. It doesn’t look bad on the Speedmaster we’ve to say, but still prefer the stretch link type bracelet reference 1039 that should be on a watch like that.

The Speedmaster Plaisted Polar Expedition watch is for sale here.

Make sure to join our Speedy Tuesday Facebook page and Like us! In return you will receive daily updates about Speedmaster watches.