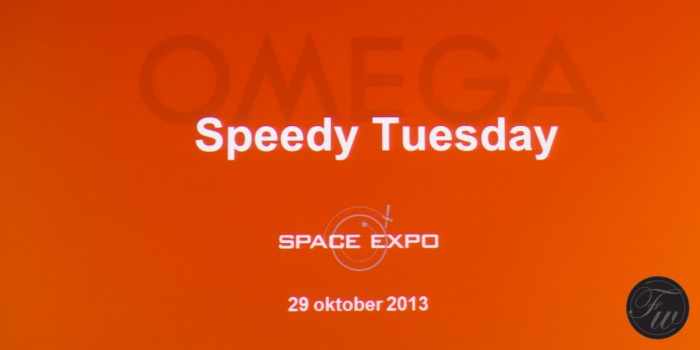 The Omega team making it all possible, special guest James H. Ragan (in the blue shirt) and Fratellowatches’ Robert-Jan Broer.

The Road To The Speedy Tuesday Event

Before we go over to the photo report of the event, we’d like to write a few words on the background of this event. Even long before we started Speedy Tuesday in the spring of 2012, we discussed the possibility of organizing an event for Speedmaster enthusiasts. We love the Speedmaster watch and to be honest, we love the people who love them. Not because we are on the same page, but because most Speedy enthusiasts are down-to-earth collectors and are easy going. We don’t like the hautain stuff, boosting lifestyle related things or flashing expensive watches and things. We just love watches.

Since we started the Speedy Tuesday articles here on Fratellowatches, we noticed that there are so many Speedmaster enthusiasts out there willing to share their stories, photos and information on these timepieces that the idea of having an event for just those people was quickly put into plans. With the help of the local Omega representatives here in The Netherlands (Benelux) and Omega Head Quarters in Switzerland we started to draft a plan.

Our goals were to put the Speedmaster fan in the spotlight, no sales (or other commercial angles), both new & vintage pieces to show and to host it in a very cool surrounding. Luckily, the official visitor centre of the European Space Agency (ESA) called Space Expo was our first and best option and they cooperated with us to have it over there. Omega brought the museum pieces we love, the new collection of BaselWorld 2013 and their museum manager, museum archivist, master watchmaker (for over 40 years at Omega) and Jim H. Ragan, former NASA engineer who did the tender and test procedures on the Speedmaster in 1964 which led to the official ‘Moonwatch’. We have some new insights on how the Speedmaster became the Moonwatch from the source and boy, some of the current information out there is so dead wrong. More soon

Without you, our reader and Speedmaster enthusiasts, this would not be possible. We’d like to stress that. For those who couldn’t come, you have to do with the pictures we took but we hope to see you at an event in the future.

Before the event started at exactly noon on the 29th of October for our Speedy Tuesday contributors, close Fratello friends and Omega Speedmaster passionates, the organization worked hard to get everything ready. The second part of the Speedy Tuesday Event, which started at 4pm was open to all people who registered through the form on this website in the weeks before.

Omega’s Speedmaster watches (including astronaut watches and prototype models) were put under the glass domes on the tables so everyone could enjoy them during the outstanding lunch. After the lunch, the bowls were removed and the guests could try and fiddle around with these special timepieces.

The guests were welcomed with a glass of champagne when they entered the Speedy Tuesday Event exhibition room. Below you see Ernie Romers (founder of Watchuseek and a Speedy wearer) entering the room.

More people popped in until there were approximately 40 people there to enjoy the lunch.

After a word of welcome and an introduction from Omega Benelux’ Mr Vanderhoeven and yours truly, the guests were shown a very cool Omega Speedmaster movie on the big screen and soon afterwards lunch was being served.

The Omega Museum Manager (Petros) introducing himself and telling the guests to feel free to ask NASA’s James H. Ragan anything they ever wanted to know about the selection procedures of the watches in the 1960s (which they did).

Above you see the happy faces of our Speedy Tuesday guests!

Below: The guy in focus is Bas van Dorp, reader of the first hour (since July 2004) and contributor to some great and legendary articles, including the famous article on Speedmaster bracelets 12-13 years ago.

Above and below: watches on the table allowed!

When the lunch was finished, the domes were removed and it was time to play.

Above a very familiar watch for the loyal Speedy Tuesday followers (click here to read about this astronaut’s watch).

Omega also brought some historical documentation with them, in this case regarding the Speedmaster F.A.P.

Dale Vito taking pictures of the gold commorative Speedy Pro BA 145.022 (we did an article on this piece here) from Apollo 16’s astronaut Mattingly.

Below: RJ listening carefully to what James H. Ragan has to say about the Speedmaster and the selection procedures.

Below: Gerard Nijenbrinks (in2watches blog and Speedy collector at large) together with James H. Ragan. James wearing the Speedmaster Professional Apollo-Soyuz with meteorite dial (click here for our review) and Gerard wearing his Alaska Project limited edition as well as a 1960 Speedmaster Ck2998 in pristine condition.

Below: Bloggers Ben Clymer from Hodinkee and Frank Geelen from Monochrome Watches sporting cameras and Speedmasters (Frank bought a First Omega in Space Speedmaster just before the event started).

Below: Gerard, Frank and Robert-Jan. The Speedmaster crew from The Hague!

After the lunch, the watches were put in the beautiful show cases. As the crowd would become a bit too big to keep a good overview on the watches, nice glass displays were used that enabled visitors to have a look at them from all possible angles.

Below: Which everyone did! A wonderful experience and possibility to learn more about the space programs and association with the Moonwatch.

There was also the possibility to get into the Lunar Rover (Moon buggy) and get your picture taken! Robert-Jan next to James H. Ragan in the picture below.

Above: Speedmaster fan Bart Thans in the Lunar Rover next to James H. Ragan.

Some guests also had their stuff signed by James H. Ragan. In this case, James signed an already impressive memorabilia (also signed by Gene Cernan) from Frank de Maere, Omega passionate at heart.

After 4pm, Omega and Robert-Jan welcomed the new guests to the event and the bar was opened. We saw some familiar and well known faces as well as new faces. We were glad to meet you in person and had a nice chat with many of them about their passion for Speedmaster watches. It was great to get in touch with many of our readers and Speedy fans. James H. Ragan also dedicated some words to the guests and was there to answer some questions as well.

Thank you, readers and visitors of the event for making it such a cool event! If you were there and took some pictures as well, do not hesitate to send them over.

The official news on the event can be found on the Omega website, here.

See below for the following reports:

Dale Vito of SpeedyWatches did so here

Boris from Watches and Art did a photo essay here

Ernie Romers of WatchUseek did a report here

Ashley Budgen of OmegaForums did a report here

Ben Clymer of Hodinkee did a photo report here