The success of the Audemars Piguet Royal Oak 15400 has to do with the upgrade this watch received a couple of years ago. In Le Brassus they decided that the 39mm Royal Oak 15300 was too small and needed a bit of an upgrade. While the 15300 was already an upgrade (introduced in 2005) for the former 36mm models, the 41mm size would appeal to a wider audience. The 39mm Royal Oak ‘Jumbo’ or ‘Extra-Thin’ remained to have the same size. Of course. 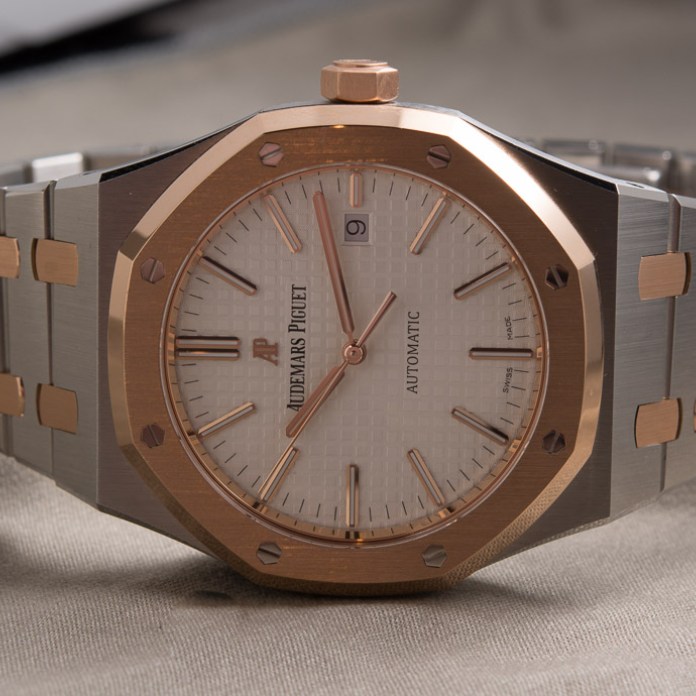 The first series of Royal Oak watches, the reference 5402 (basically the predecessor of the current 15202) had also been available in two-tone. The 15202 was and is only available in either stainless steel or gold. The 15300 was never available in a two-tone version but its 36mm predecessor basically was as well. Since I see the Royal Oak 15400 family more or less as a separate line from the famous 15202, actually as a descendant from the 36mm 14790 reference, it makes perfectly sense to create it in two-tone. I am wondering – out loud – how a two-tone 15202 would be received by aficionados of the ‘Jumbo’.

In any case, the new 41mm Royal Oak in two-tone received reference number 15400SR.00.1220SR.01 (in full), where SR refers to the use of gold and steel. Audemars Piguet used 18 carat pink gold for the new Royal Oak 15400 Two-Tone. A smart looking combination.

At first I wasn’t too enthusiastic about the two-tone combination. But now I’ve seen it a couple of times in the flesh, and tried it on, it is actually an interesting and good looking combination. Whether you like it or not, I noticed that a couple of brands are releasing gold/steel (or two-tone) models again.

The 41mm case of the Audemars Royal Oak 15400 Two-Tone is the same as its brother stainless steel. However, the dial is different of course. Pink gold applied hour markers and hands on the beautiful silver dial. As you can see, the dial has the famous ‘Grande Tapisserie’ pattern.

Under the hood of this Royal Oak 15400 Two-Tone, we find the Audemars Piguet in-house developed caliber 3120. The movement that AP introduced together with the 15300 in 2005. It is also being used in other models, such as the Royal Oak Offshore Diver (that we reviewed here). The case back is screw-down and together with the screw-down crown it is water resistant to 5ATM (50 meters). We wouldn’t recommend you to swim with it though, not in the last place because of the fine brushed and polished finish on the case and bracelet that tends to show scratches very easily (looking at my own Royal Oak).

Although I’ve warmed up for the gold and stainless steel combination, I am not sure if the watch loving world did. Especially in Europe there is little demand for two-tone watches. But you will never know how this ‘resurrection’ is going to work out and what the effect will be on consumers. Some times they need to be inspired. Let’s hope for Audemars Piguet that this Royal Oak 15400 Two-Tone inspires them enough!

Since we are located in the Euro zone (and you’ve probably read about the issues with the Swiss Francs and the Euro conversion, if not click here), we couldn’t get an official list price on this watch yet. However, from what we’ve understood the price in USD will be $25,600 USD.