What could be more appropriate for a watch named “Overseas” than a world time complication? Vacheron Constantin’s updated Overseas collection was one of the highlights of SIHH 2016, and following five models that debuted in January is today’s release, the Vacheron Constantin Overseas World Time 7700V. Vacheron released an array of Overseas models at SIHH, and you can see our hands on with the new Overseas “Simple Date” here and the Overseas Chronograph here. Now, Vacheron adds a genuinely useful – and hence still very popular – feature with the world time indication.

The new Vacheron Constantin Overseas World Time 7700V watch comes in a steel case with three dial color variations of blue, brown, and silver, all featuring a map of the northern hemisphere. Just like the Vacheron Constantin Patrimony Traditionnelle World Time watch this new world timer features 37 time zones, more than many watch makers dare to cram onto a dial. 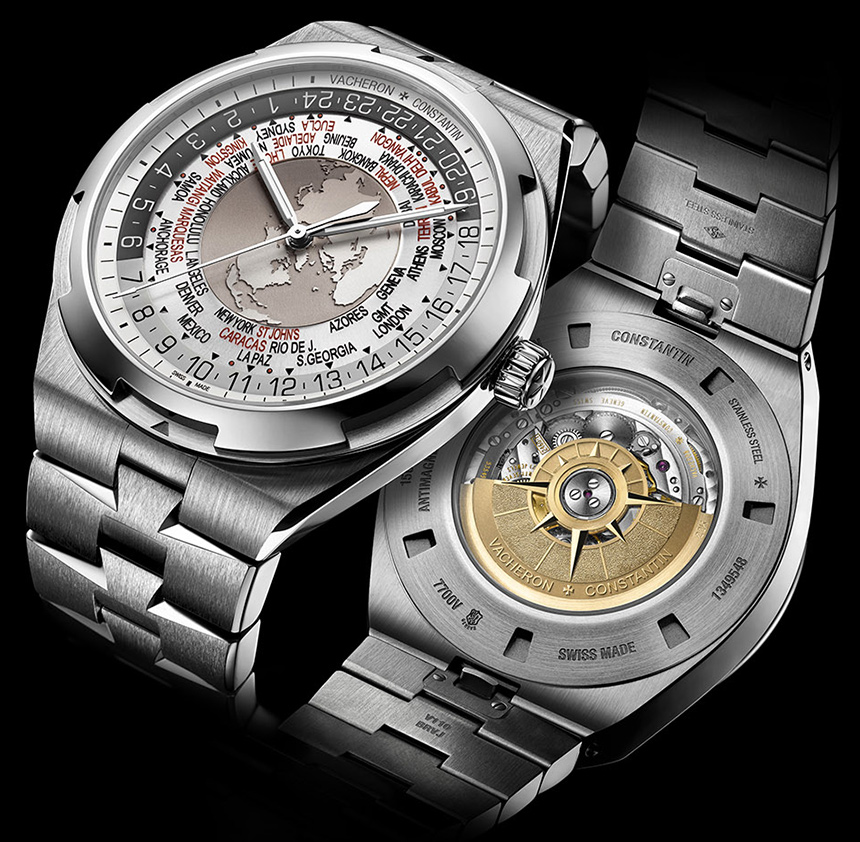 It would be hard for so much information not to look a little cluttered, but that is perhaps part of the appeal of a world time watch – similar to the charm of a world map with its detailed information representing far-away and exotic places. The map portion of the inner dial, with velvet-finished oceans and the land satin-brushed in a sunburst, is covered by a half-smoked sapphire disk that turns to represent daylight and darkness. Moving outward from that are the cities, the 24-hour scale divided into black and white for am/pm, and a minute track.

Inside, the Vacheron Constantin in-house caliber 2460WT is not new, but it gets the job done. It comprises 255 parts and runs at a modern 4Hz (28,800bph), although one very notable shortcoming is its 40 hours of power reserve. Either a longer reserve or at least a linked indicator would have been welcome – and perhaps also possible to achieve, since the movement is not terribly thin either, coming in at 7.55 millimeters thick. The “WT” in the movement’s name stands for “world time,” of course, and it is a Vacheron-patented world time mechanism here – although this world time indication was originally invented around 1935, by Louis Cottier, an independent watchmaker in Geneva.

Visible through the sapphire crystal case-back, the 2460WT is beautiful, and the rotor has the star-like “wind rose” motif often found on maps representing the cardinal compass points – carried over from the other Overseas models, but seeming all the more congruous for this Vacheron Constantin Overseas World Time 7700V in particular.

With levels of finishing to be expected from the 260-year-old brand, you will also notice the Geneva Seal unassumingly revealed beneath the rotor, as well as on the caseback. We will remind you that requirements to obtain the Geneva Seal have been greatly expanded beyond movement finishing, and we explored in-depth the Geneva Seal’s requirements and everything you could ever want to know about it here.

Like the other Overseas models, the movement is protected from magnetism by a soft iron ring installed around the caliber – it is, however, mixed with a see-through case-back. Surely, the soft iron ring will yield some improved resistance against magnetic fields, but certainly less, than what you’d find on, say, a Rolex Milgauss or IWC Ingenieur (both originally and purposefully designed to be anti-magnetic with soft iron cages and solid case-backs).