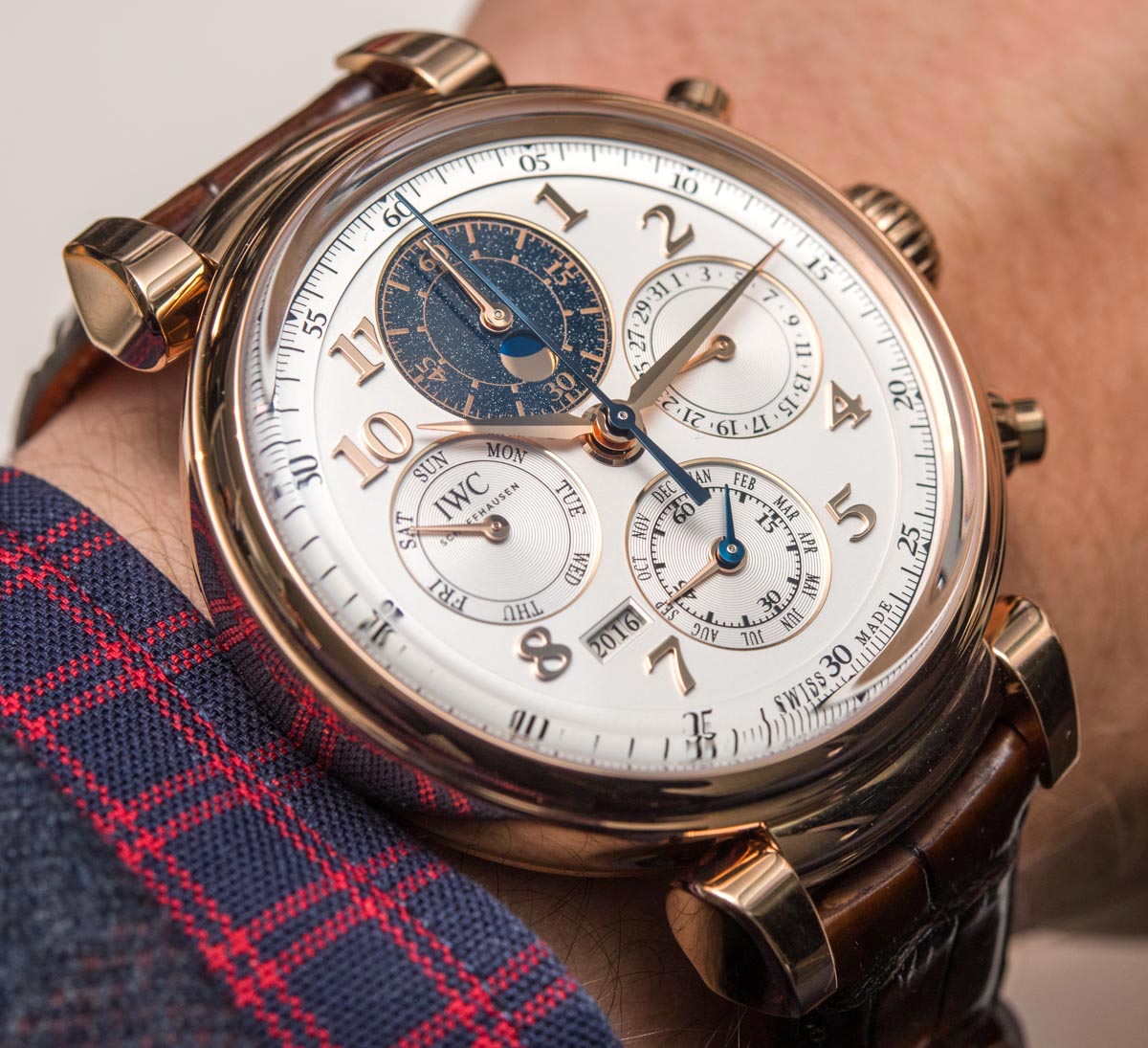 IWC launches its old-new Da Vinci collection at SIHH 2017, ditching the not very successful angular case from some ten years ago in favor of a classical, round design.  This new IWC Da Vinci Perpetual Calendar Chronograph has stepped up to be one of my favorites from this year’s new releases and here’s why that is. 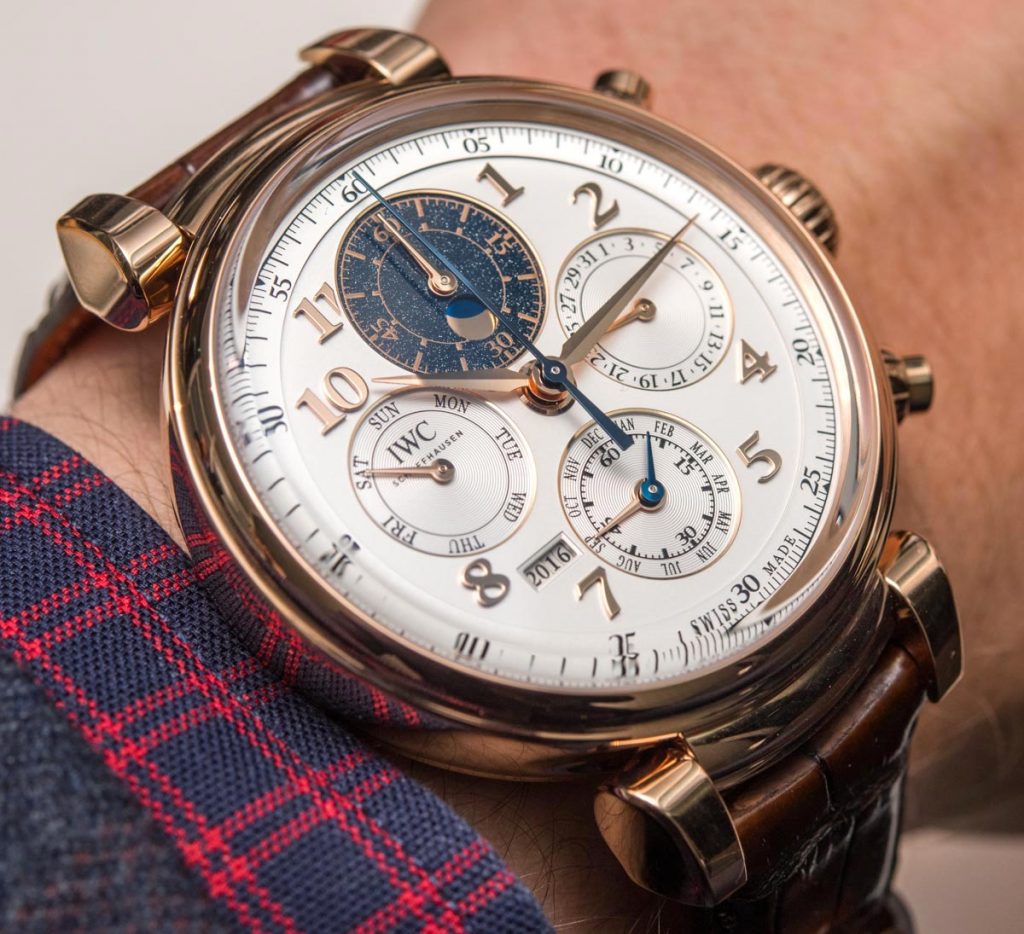 I’ll go out on a limb and say this: IWC perpetual calendars – especially the Portugieser variants, of course – have for a long time been among those genuinely complicated and expensive watches that I could see people… well, actually wear. Not just in fancy airport lounges or events, but also in perfectly everyday settings, out and about – though likely more so in big cities of world’s rich countries than elsewhere. While that is a statistically unsubstantiated claim, I’ll stick to it because to see a watch of such complexity on actual people’s wrists out in the actual world is not only fascinating but also, in a way, inspires one to see said watch in a slightly different light. 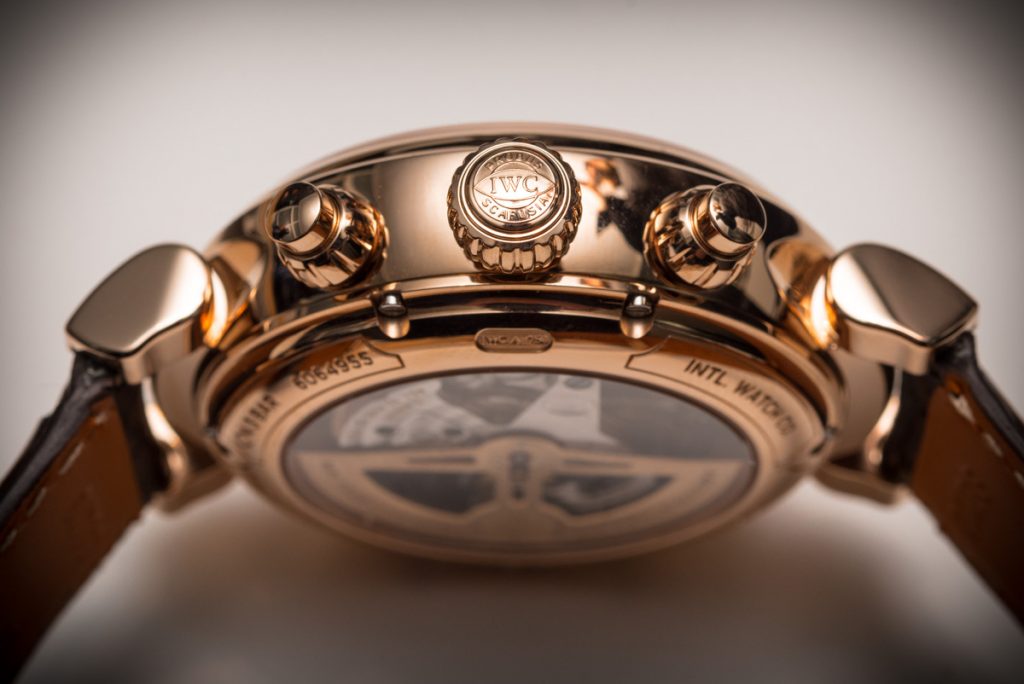 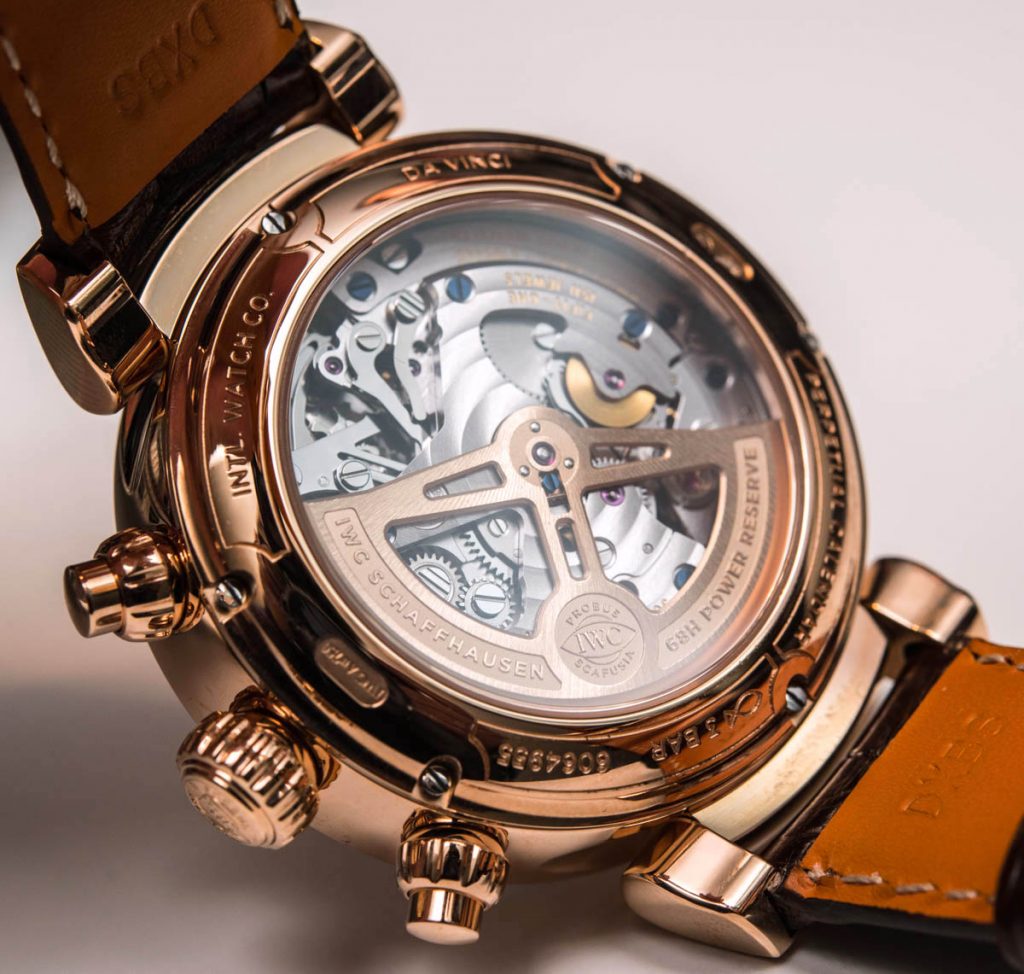 That noted, my gripe with IWC has for some time now been that they appeared not overly rushed with their efforts to successfully create a new chapter for their impressive, Kurt Klaus-developed perpetual calendar. Now, though, that appears to have finally changed with the old-new IWC Da Vinci Perpetual Calendar Chronograph. 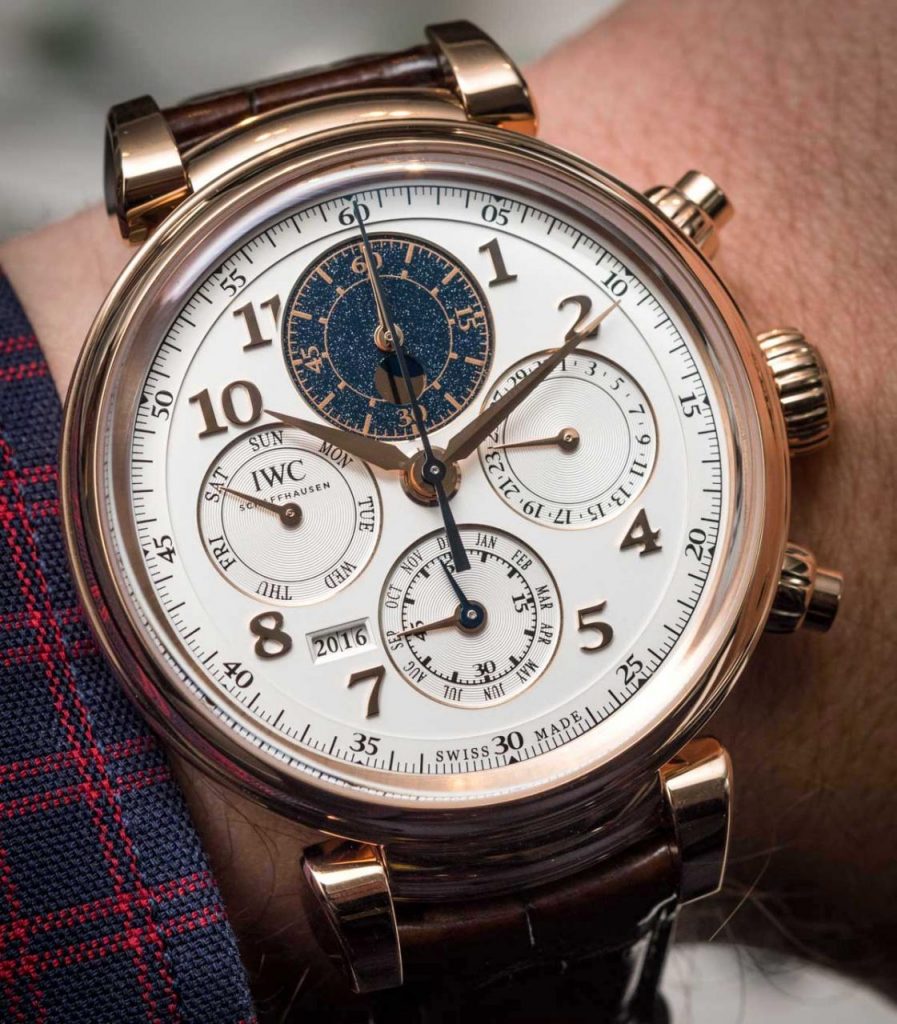 “When in doubt, go round” may just be the mantra at IWC, but, as we’ll see, not without reason. Seemingly in tune with the recently re-styled Ingenieur, which has also dropped its more agressive and angular lines for a circular, more target-group-friendly look, the Da Vinci returns to framing its many indications with a perfectly round bezel. Boring it isn’t, though, as it offers many fine and some unexpected details, so let’s work our way through all of these. 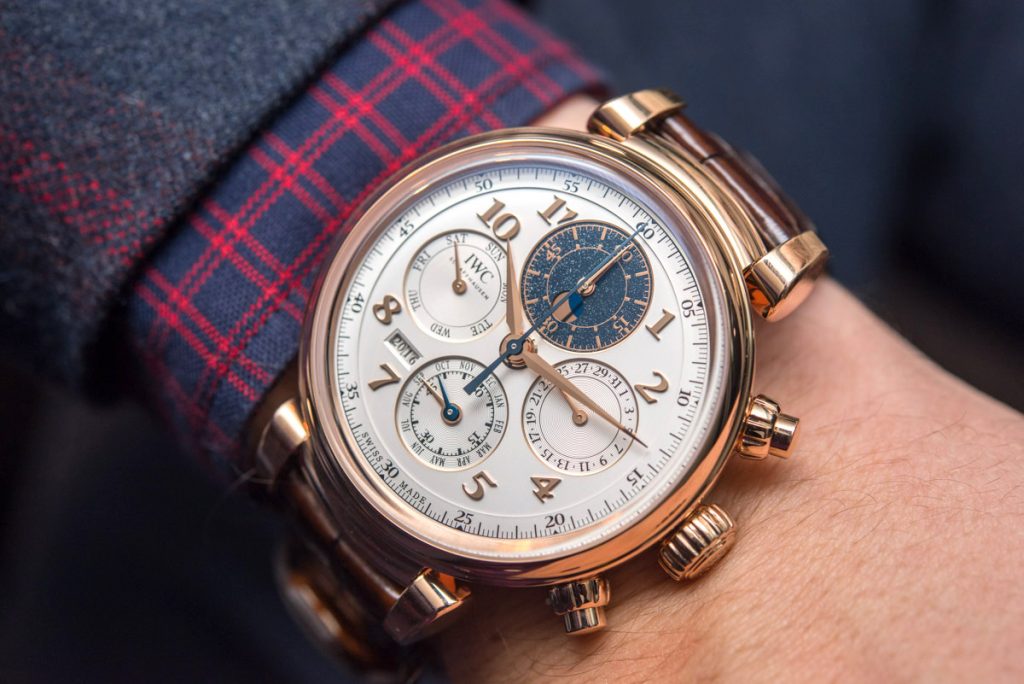 On the wrist, and especially when seen in the metal, the IWC Da Vinci Perpetual Calendar Chronograph in red gold is, without doubt, one of the most striking watches of SIHH 2017. As thoroughly disappointing as I personally found the dials on last year’s cheap-n-cheerful IWC Pilot, the “face” of this Da Vinci is the exact opposite in every single way. It is serious, purposeful, balanced, and its quality of execution matches its price point – qualities that didn’t come to mind when looking at those Pilots. 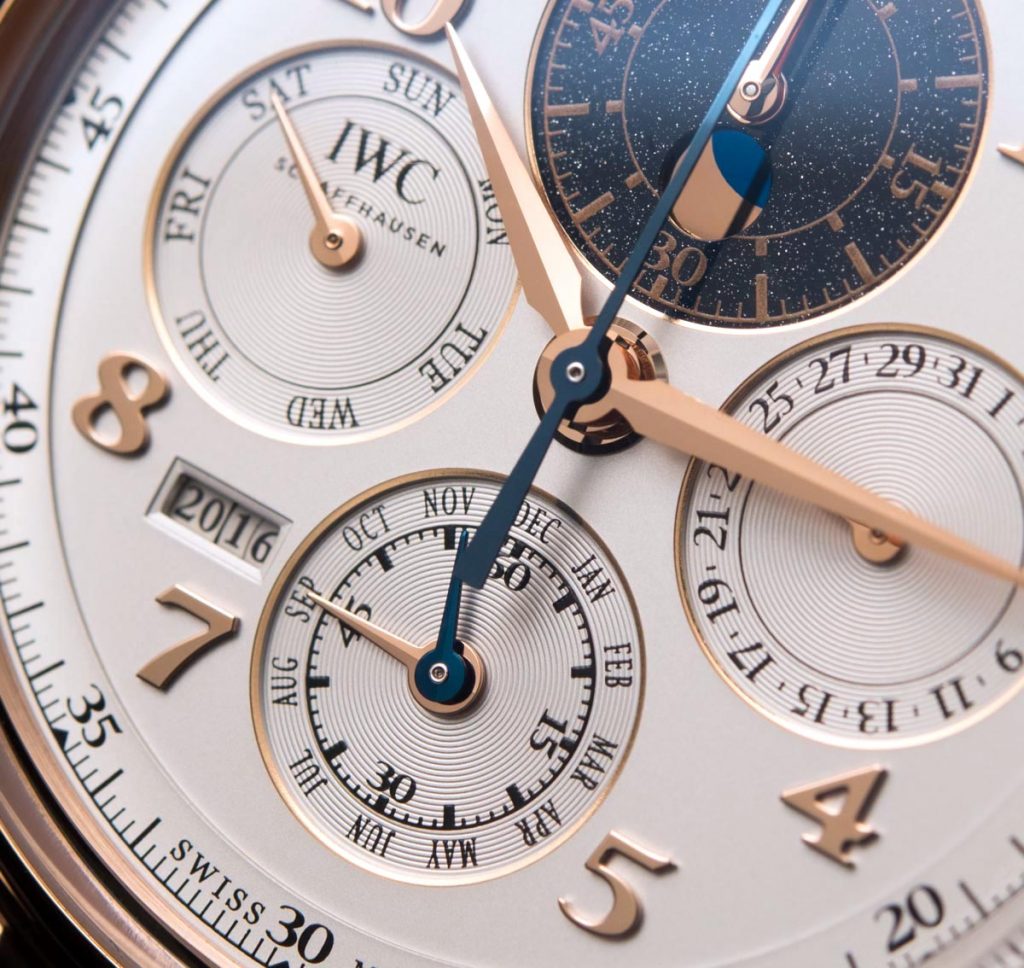 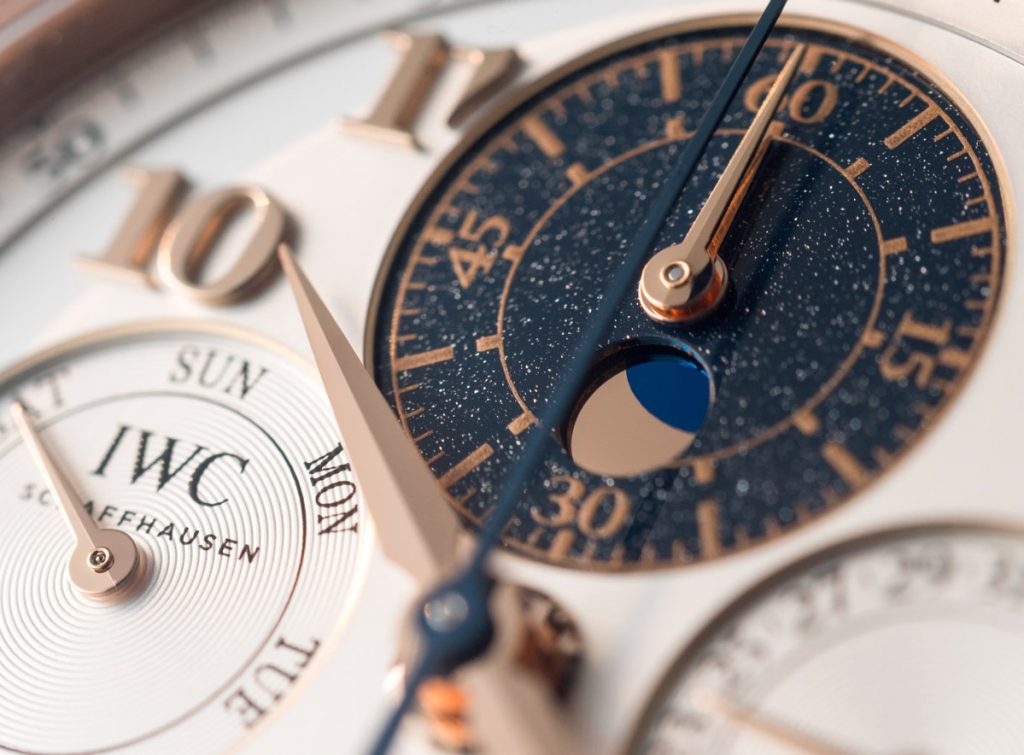 The manufacture caliber 89630 in the IWC Da Vinci Perpetual Calendar Chronograph is the first IWC to combine the Kurt Klaus moon phase indication system and the double chronograph counters in one sub-dial – talk about a niche, but impressive feat… The moon phase here is accurate not to the measly one day in 122 years as most moon phases, but to one day in 577.5 years. 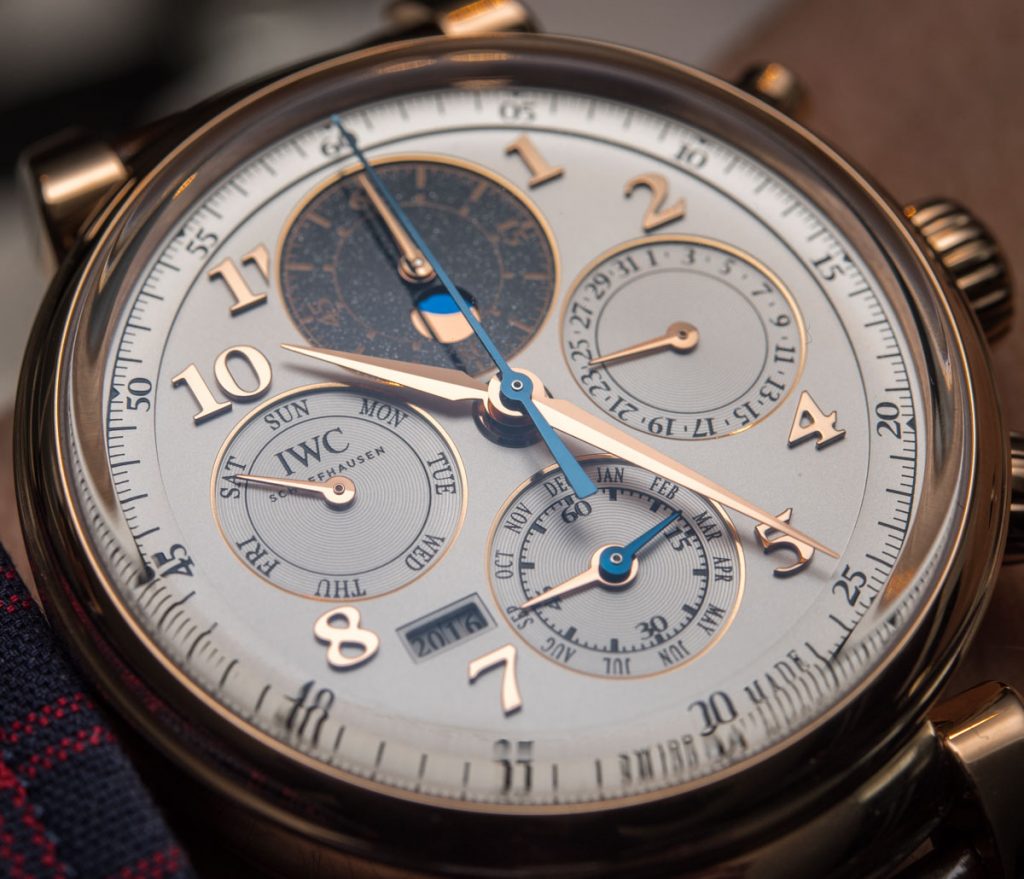 The soft look of the applied gold indices contrast rather beautifully against the sharp, angular, pointy hands – a subtle but impressive detail. IWC’s some thirty-plus years of experience in designing similarly feature-packed dials shows in how the silver-plated dial lacks any outstanding patterns or texture, serving as a soft-glowing backdrop that allows all other nicely separated elements to stand out, improving legibility and easing on aesthetic overload. 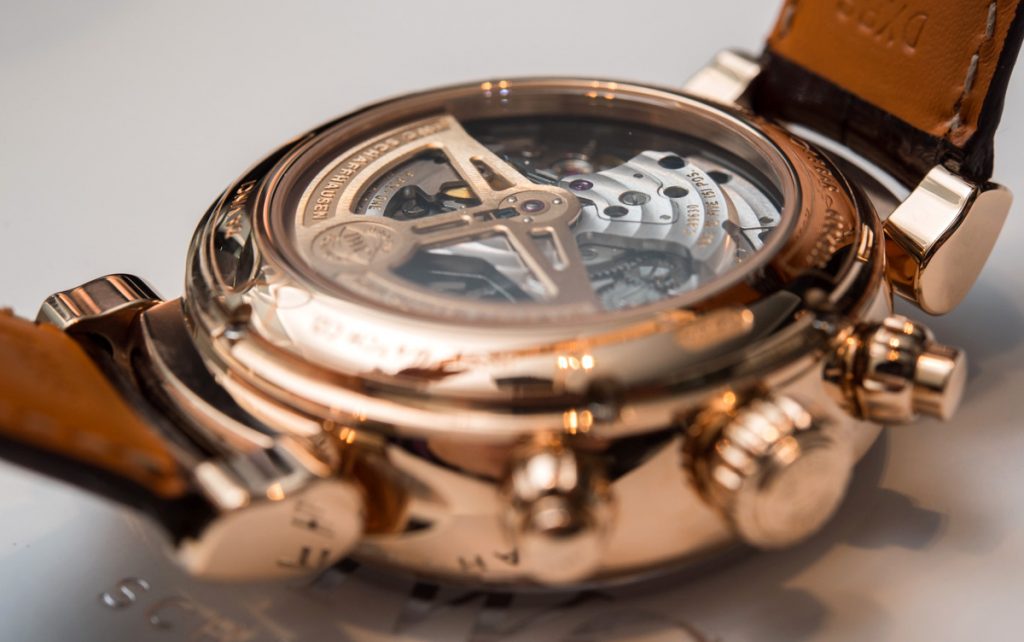 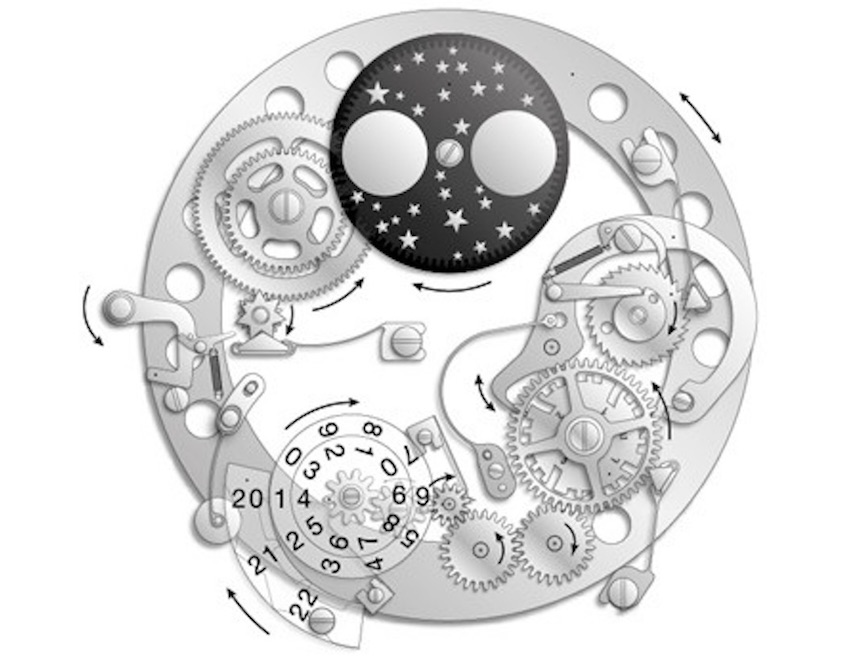 The year window above 7 o’clock is clearly more for bragging rights than for anything else – if it were to make watchmakers’ lives easier to set the perpetual functions of the movement it could still be hidden by the dial itself. But IWC even goes so far as to say that they already “supply the century slide bearing the figures 22, 23, and 24 for the years 2200 to 2499 – you know, just in case manufacturing technologies in 2247 wouldn’t allow for the making of this small piece.

The perpetual calendar is matched with the 12-hour chronograph which also happens to feature a flyback function, just to further complicate the already highly impressive caliber. The 89630 runs at a frequency of 4Hz and its 68 hours of power reserve is recharged by a genuinely massive (typical-IWC) winding rotor in solid 18 red gold that winds in either direction. IWC claims the 68-hour-long reserve can be maintained while the chronograph is running. 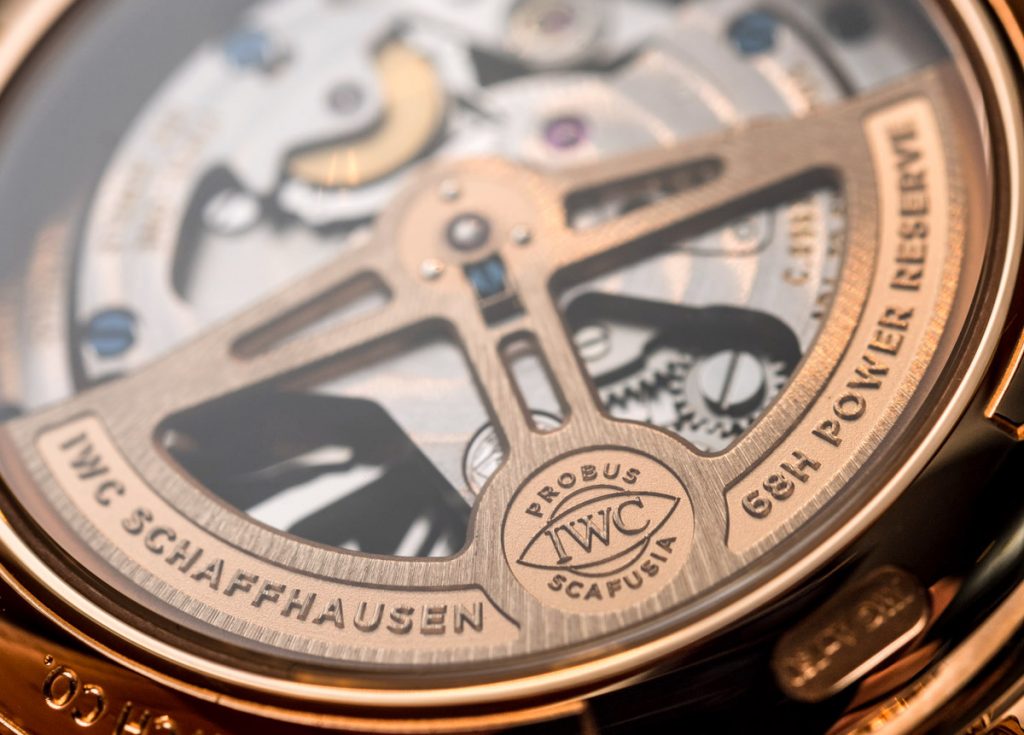 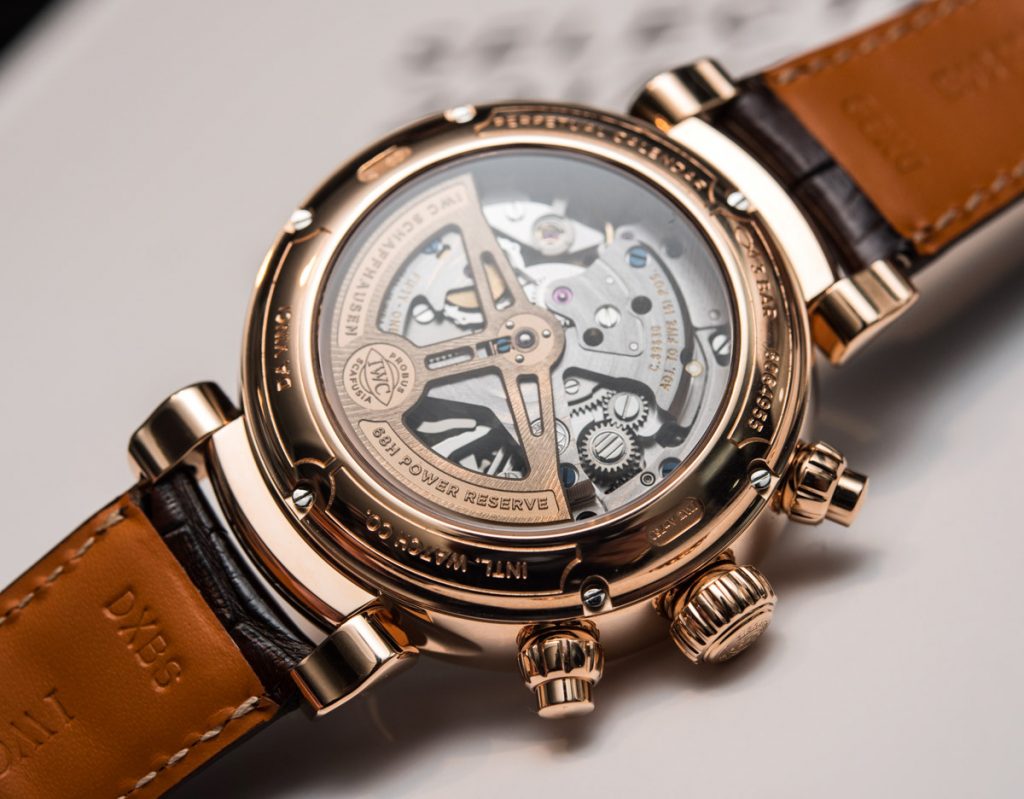 While at 43mm wide and 15.5mm thick (something IWC actually calls “a striking case height”), this new piece falls somewhere in the mid-field of today’s watch sizes – as much as that may pain purists. The thickness is considerable, but I am pretty sure that this is about as thin as you can expect when you stack automatic winding with a massive rotor, barrels to support a long power reserve, a flyback chronograph, and a perpetual calendar with every traditional indication possible. If 15.5mm is too thick for you, you would likely have to sacrifice some of the functionality in order to shave a few millimeters off the overall thickness. 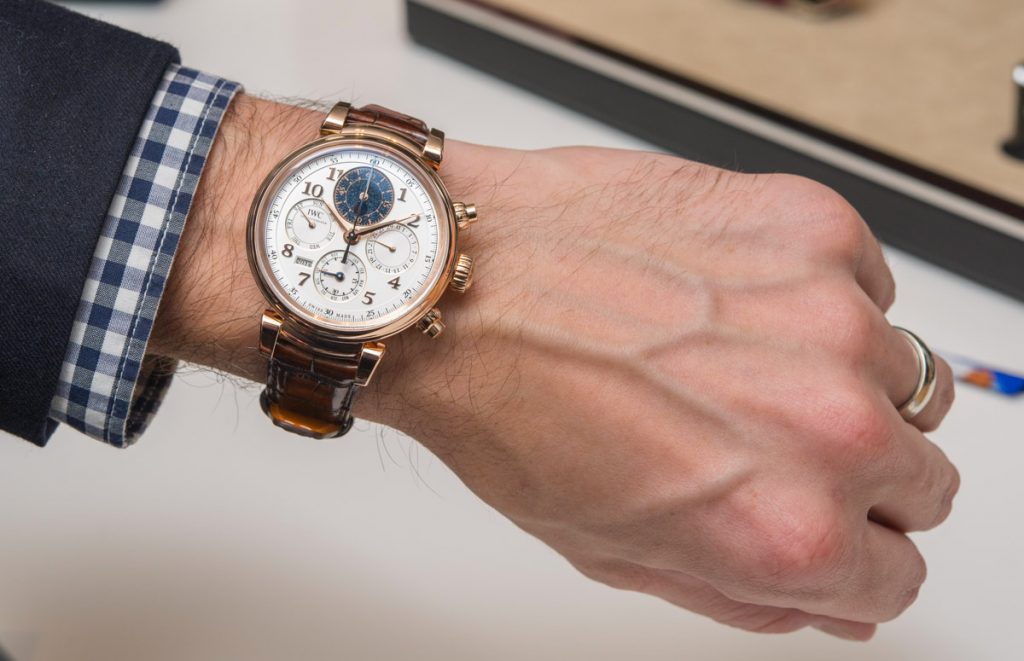 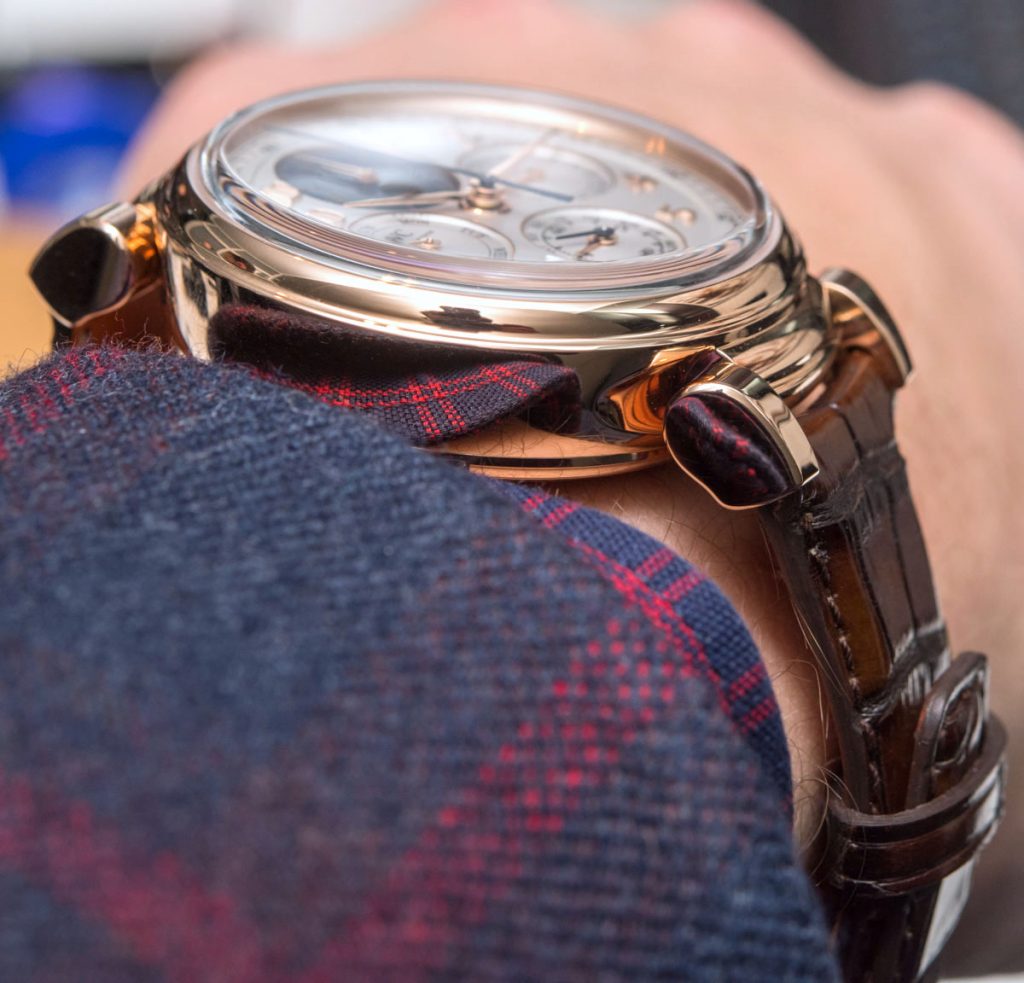 Still, the swiveling lugs and the Santoni leather straps – some of the very best OEM straps out there – ensure excellent wearing comfort. Another bonus of the articulating lugs is that they don’t look as “long” as they otherwise would: falling off at a steeper angle from the plane of the case, the overall reach along the width of the wrist is decreased, making for a more sensible look. Last but not least, the domed sapphire crystal performs well in making the case appear thinner than it is, leaving room for the tall center pinion to reach high above the plane of the dial, but doing away with a clunky and thick bezel. These are all neat details, but how do they add up? 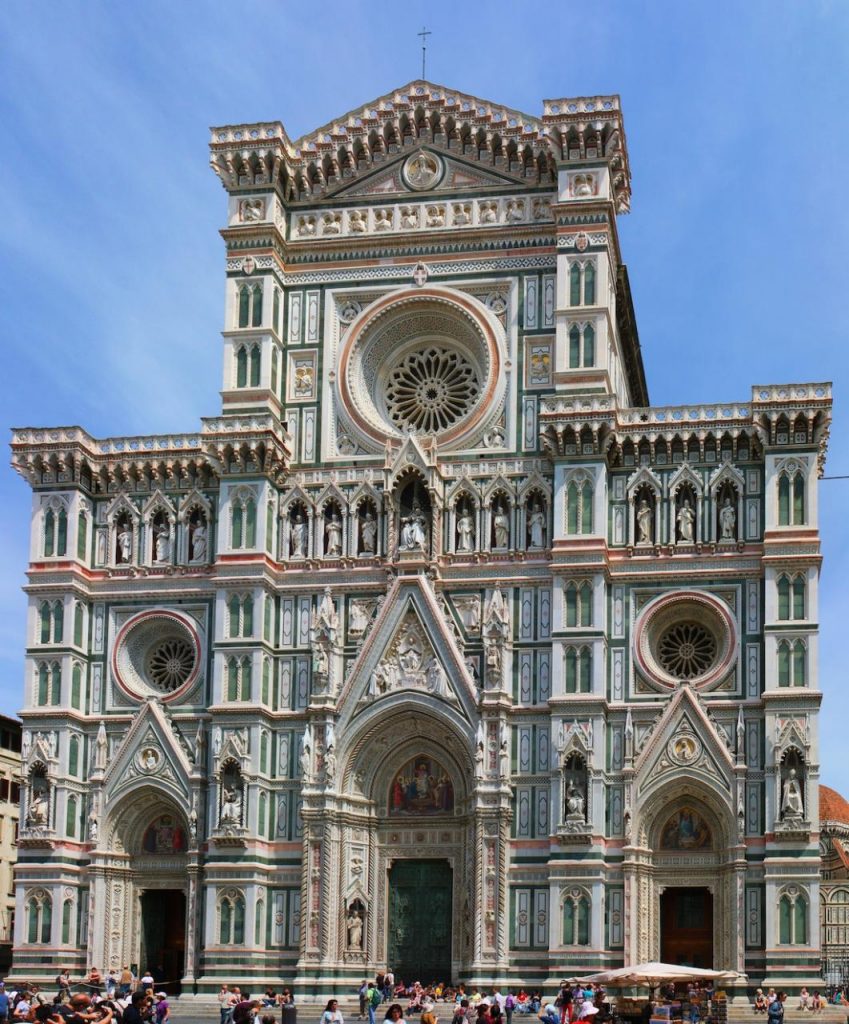 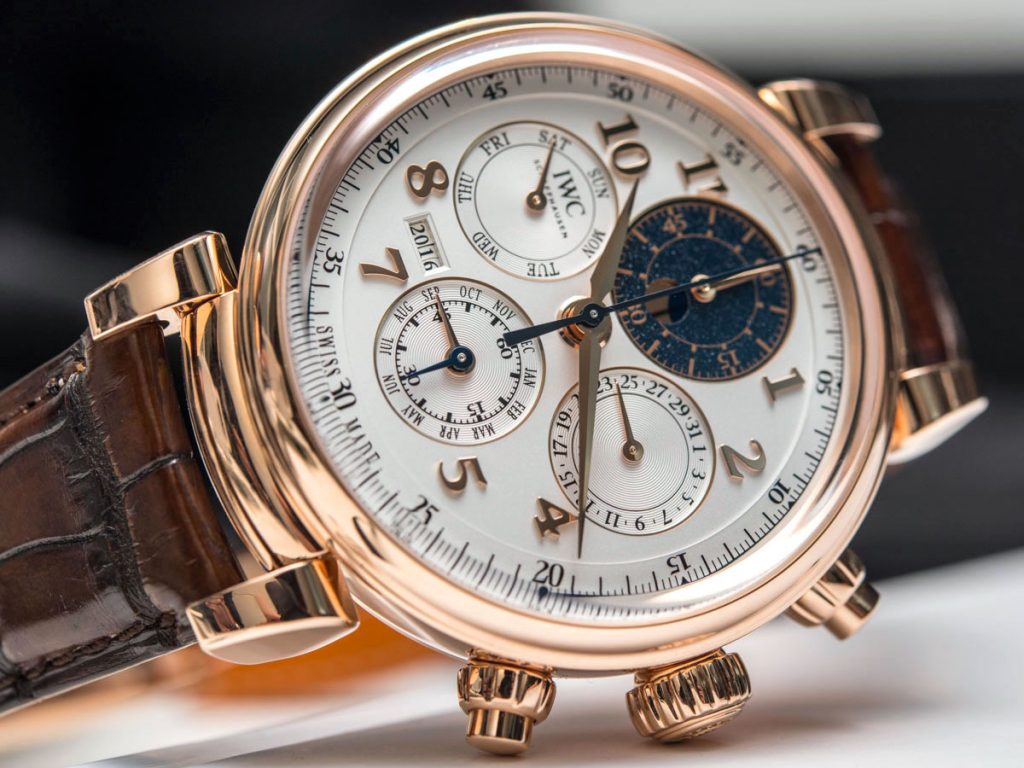 If you have read my review of the Omega Ploprof from not too long ago, you’ll know that I have an admitted tendency to compare some watch designs to architecture… and, yes, it’s happening again. There is something to the IWC Da Vinci that reminds me of cathedrals: there is this mix of a busy (but quite intelligent) array of extremely fine details and a sense of monumentality. Could I identify this exact reminiscence when going hands-on with this new Da Vinci? Nope, but something drew me to looking at the very image just above until I could figure out what this watch sort of reminded me of. If you think I’m going nuts and am totally alone with this idea, or if you agree with this comparison, drop a comment below.

From entirely subjective mind-games to objective history: IWC produced the first Da Vinci Perpetual Calendar Chronograph in 1985 with the Reference 3750. Fitted with the IWC 79060 caliber, a perpetual calendar chronograph movement that could be adjusted not through ungainly correctors set into the case but from the crown, it required a comparably complex and striking exterior. 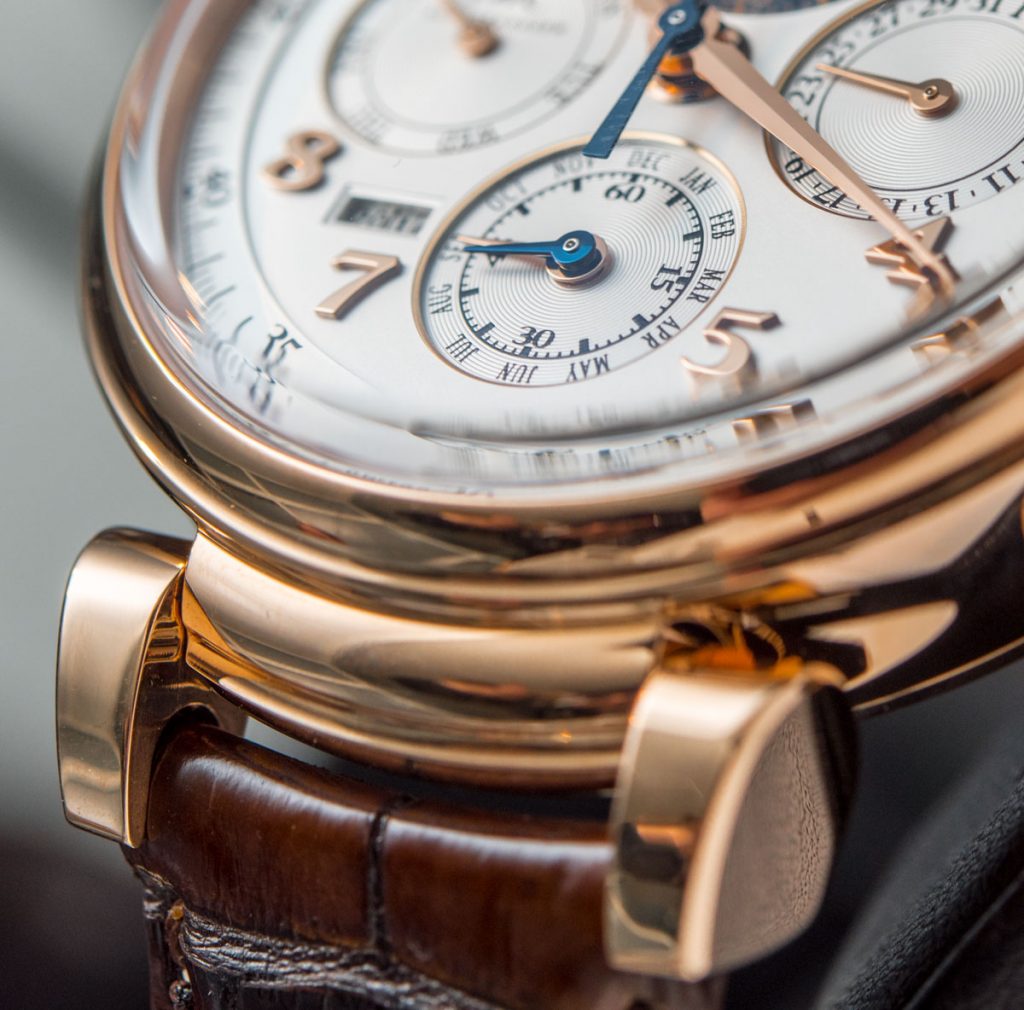 To my surprise, I wasn’t too far off with the architecture reference: the story goes that IWC’s head designer at the time, Hano Burtscher, was a great admirer of Leonardo da Vinci (1452-1519) who, in the Codex Atlanticus, worked on plans for harbor fortifications (among many other things). To cut a long story short, Burtscher’s design ultimately united calendar displays, four sub-dials, nine hands, a four-digit year display, a moon phase indication, as well as a complicated but very classical-looking case that combined clean lines with swiveling lugs. 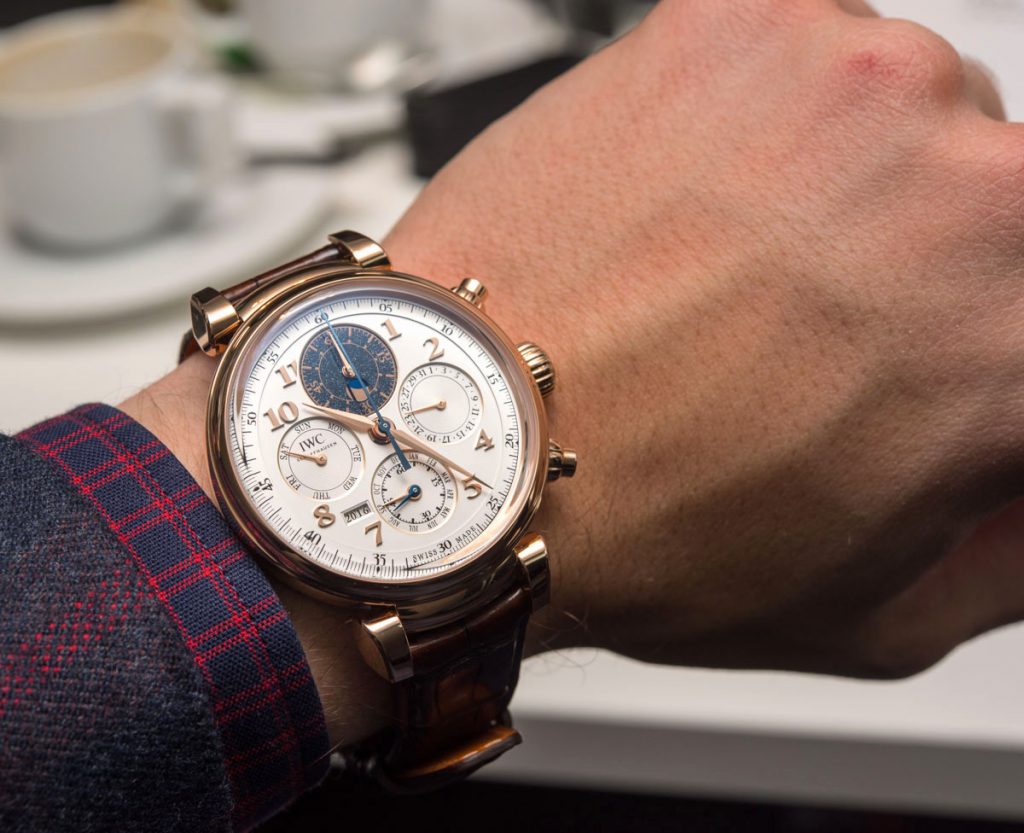 All in all, the IWC Da Vinci Perpetual Calendar Chronograph in red gold is a genuinely striking-looking watch that merges old-school design without looking like a fossil from another era or a fake-vintage from our present times. It carries its aesthetic and actual weight graciously, allowing it to make a powerful statement without looking like it’s trying too hard. I’m glad this wasn’t the year of the Pilot. 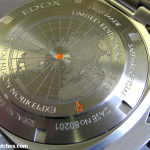