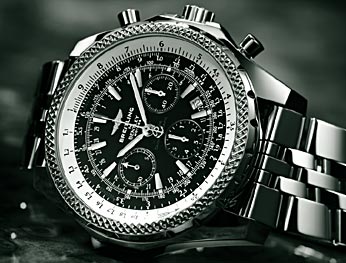 Yes, I know, it should be Breitling for Bentley. But not according to the saleslady of Kerstens Juwelier I visitted last wednesday during my lunchbreak. I was in a shoppingmall in Rotterdam, looking for a place to get some lunch (I was taking a Microsoft-course nearby) and suddenly I noticed this jeweler. It had Van der Baauwede and Breitling, and the regular designersstuff. I went inside and immediately dropped my eye on the Breitling for Bentley watches. I liked the brown dial and the large date window, but when I inspected the watch a bit more, I noticed that the bracelet isn’t exactly fit tightly to the case. The endpieces of the bracelet are just straight, which gives it a bit of a strange look. Not to mention cheap. The other ‘regular’ Breitlings had a fitting end-piece, so I made a remark about it to the saleslady. She told me these were not Breitling watches, but Bentley watches for Breitling. Yeah. Now we are talking

The finish of the watch was nice though, and the bezel wasn’t as clunky as I though it would be. However, this is a large(!) watch. It is certainly bigger than my 44mm Panerai. The bracelet was (except for the minor detail on the endpiece) nicely crafted as well, I think they call this the pilot-bracelet.

I didn’t ask what movement would be inside, to prevent myself from hearing more rubbish. I left the store with a nice Breitling for Bentley brochure and mixed feelings about the watch (and store). The store was all-white on the outside, and quite ‘clean’ on the insite. The wall was full with pictures of famous Dutch people that paid the store a visit. Not people I would want to be seen with though, but I guess certain customers could be attracted to this. If they watch soap-series that is.

Breitling is a brand that doesn’t do it for me, except for their Navitimer range. I love the vintage ref.806 models and I kinda like the new ones as well with the tri-compax layout (that’s subregisters on 9,3 and 6 o’clock). This one was a bit too big for me (and I am not a small guy) and I wonder why someone would want to wear this piece. I have large wrists, but someone who wants to wear this have to consider a Panerai as ‘normalsize’. Is it ‘da bling’-factor or do they really think they get something special at 6000 Euro?

Oh, I don’t know and frankly, I won’t give it much more thoughts than the one I just wrote here. Next!