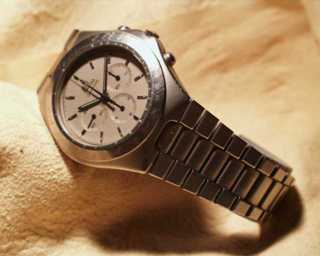 Although Chuck Maddox wrote that the only true Mark V is a Speedmaster Mark V with caliber 1045 movement, I hereby add the German Special from 1982 with caliber 861 movement to ‘Mark V’ as well.

Yesterday (and today) a fellow from a large ICT company configured a server for one of the companies I work for, I noticed at lunch that he was wearing a Speedmaster ‘Mark V’. It slipped my mind that it probably would seem a bit ‘sick’ to start about his watch, but on the other hand, this watch probably cost him quite some money, and since it is quite scarce, I decided to go ahead.

He bought this watch in 1982 (which is the only year Omega produced it, for the German market. Productionnumber unknown) and he still has the booklets and bills of the watch. He lost the box somewhere in time.

The watch looks great for its age, and it should, it is getting serviced every 3 years and had a major overhaul 2 years ago. He told me he wants an automatic version, because he forgets winding it quite often.

I told him when he considers selling it, he should contact me again. However, I really meant it when I told him he should keep it because it is quite special. At least I would regret selling such a watch I think. Especially when I bought it new that long ago.

Anyway… I see quite some Speedmasters in the flesh here in my town and in The Hague, but never these kind of ‘specials’. Below you see a picture of the exact same watch, photo taken by Chuck Maddox.