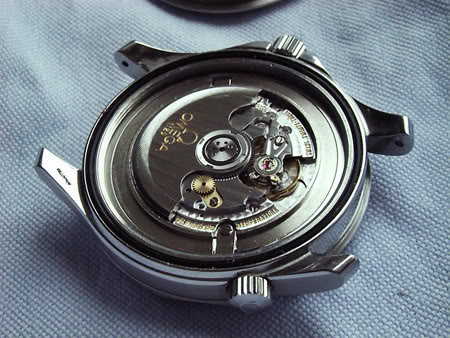 Every once in a while, this discussion comes along. In forums for newbies, but also in forums for the more knowledgable collectors, like Watchrap.com.

Aside from differences in the look & feel of these two brands, people also tend to question which movement is better. Better in terms of finish, accuracy, durability and¬robustness. At WatchRap, someone asked this question about the Omega caliber 1120 (based on ETA 2892-A2) and Rolex caliber 3135 (inhouse).

Jack Forster¬wrote an answer that seem to cut some wood (Dutch saying):

“As far as robustness goes, I’d have to give the edge probably somewhat to the cal. 3135 as it uses very, very tried and true materials and it’s pretty much optimized to keep a very close rate using well tried materials and methods. Overall it’s a pretty rugged piece of work. Cal. 1120 is a modified 2892 and considering how many millions of watches are running the movement, and how much experience the industry has with them, it’s as close as anything to a guarantee that it’ll run like a top for as long as you own it. I personally find cal. 3135 to be a more interesting movement because it’s got more optimizations for chronometry, including an overcoil, adjustable balance bridge, etc. but that doesn’t mean that any watch running a 2892 base caliber is going to give you trouble.

Better? -that depends on what’s important to you. Both movements if serviced regularly and reasonably cared for have an excellent chance of outlasting you. The Rolex all other things being equal is apt to be a better rate keeper. However, the odds of the average owner noticing the difference is probably close to nil. My own tastes in Omegas gravitate much more to the co-axials, but there ain’t nothin’ wrong with cal. 112O.”

Personally, I don’t care much about these minor differences. Both movements have proven themselves through the test of time. If I am not mistaken, the 3135 movement is here since 1988 and the Omega caliber 1120 is used since the 1990s (the Seamaster Professional started using it in 1994/1995, as successor of the caliber 1109 movement). I like the fact that the 3135 is inhouse and praised for its micro-stella adjustment and double bridge, but my Seamaster Professional with caliber 1120 did the job quite accurate as well. All technical enhancements are a nice-to-have, but no more than that. I am not a movement purist…