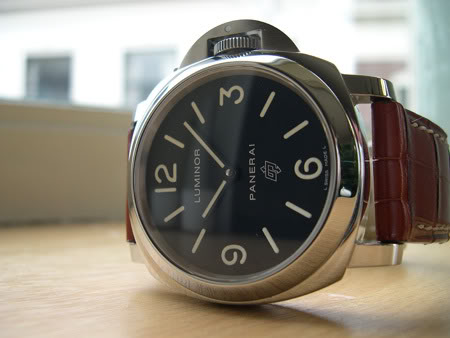 Regrets, I have a few, but then again, too few to mention.. One of them is selling my PAM00113, the Panerai Luminor Marina with a white dial. Not a regret because of the white dial, but because the fun I had with the watch. The large size makes it a fun watch to look at and the number of straps you can buy and change should be considered as a separate hobby! Just when I thought I was going to add another Rolex to the collection, I noticed this PAM00000 (Panerai Luminor Base with OP logo printed on the dial) on a Dutch watch portal. I emailed and phoned with the seller, and the deal was done. Last satuday, I picked it up and I can tick off one regret from the (short) list.

As I wrote above, it is a PAM00000 or PAM Luminor Base Logo and it has been produced in 2007. The J-serial number is engraved on the back and properly filled in on the warranty card (stamped by a Dutch official dealer). There are 900 made of this type of watch for 2007. The movement is called the OP I which is actually a modified Eta/Unitas 6497 movement. The movement is therefore about the least interesting feature of this watch Panerai is about history, large watches and changing straps!

I changed the original OEM calf strap to this OEM Croco strap I bought over a year ago for my PAM00113, which I didn’t include when sellin it. Probably knowing I would get myself a Panerai again in the future!

All-in-all, 2007 is a nice horological year for me! Getting myself a Rolex Yacht-Master in stainless steel/platinum and this Panerai Luminor Base Logo, I do not complain at all!! I guess I will be saving up for that Nautilus or Royal Oak Jumbo a bit longer now..