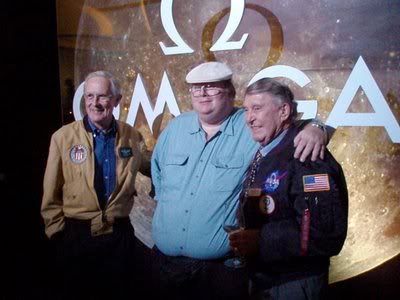 On the 12th of May, Chuck Maddox passed away.

I will keep this post short, as it is quite hard for me to put my thoughts and feelings about Chuck in this message. I considered Chuck to be a friend, although we never met in person. For almost 9 years I conversated with him via email and AIM and once by phone.. Long winded emails and AIM conversations about watches and all kinds of other things that came to mind. He used to send me CD’s with photos, a CD with interviews with Wally Schirra, magazines he contributed for and a sci-fi book. A few years ago, I found this Speedmaster LCD for him and he sent me a bunch of watch tools to say thanks. The incredible thing is, based on the numereous responses to this sad news, that he had a whole bunch of people from the watch community he did such things for.

Chuck Maddox was the king of Speedmasters and chronographs in general. Without him, I don’t think the on-line Speedmaster community would have grown so big or would have so much knowledge about these watches and the link to the NASA space program. His emails, forum posts and articles are legendary. As he is.

Goodbye my friend. My AIM window says you are offline and I still can’t believe it will stay that way. Rest in peace.

A picture of Chuck with astronauts Charlie Duke and Wally Schirra in 2007.