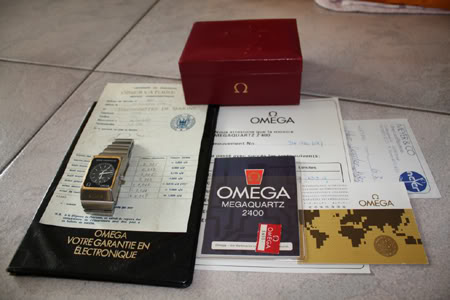 My fellow Omega addict Mauriche, mailed me a photo of his wonderful Omega Marine Chronometer. This is not the average clunky 1970s Omega watch, this one is quite special actually. The Omega Marine Chronometer features a 2.4Mhz quartz movement that is graded as a ‘Marine Chronometer’. There are similar Omega Megaquartz 2400 watches from that era, but these lack the ‘Marine Chronometer’ wording on the bezel of the watch. The Omega Megaquartz 2400 was introduced in 1973 in both gold and steel versions (reference BA/ST 396.0806) and in 1974, Omega introduced the ‘Marine Chronometer’ model in steel (ST 398.0836) with caliber 1511 and in 1975 (ST 398.0832) with caliber 1516. The 1974 model is limited to 1000 units and the 1975 model to 8000 units, according to this list. Bill Sohne, the Omega specialist, wrote a clarifying article at http://www.chronomaddox.com/omega_megaquartz_2400.html.

Mauriche, owner of the watch as pictured below, is a lucky bastard to have it complete with original Omega manual (Megaquartz 2400 booklet in German), Omega warrantee card, Marine Chronometer certificate of the Besancon University, Marine Chronometer test report by Omega, original box, price tag (3450 Swiss francs), receipt and all spare links for its bracelet. Wow!

He bought it from the first owner, a German gentlemen who bought it in 1976 in Basel.