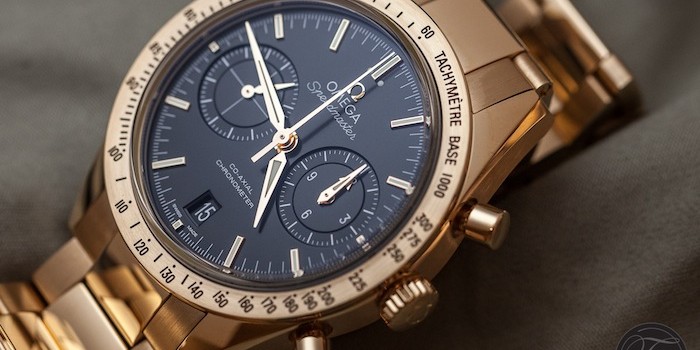 During Baselworld, Omega showed us the new caliber 9300 Speedmaster ’57 range including a few models in gold and in gold & stainless steel. These 41.5mm timepieces (indeed, the normal Caliber 9300 Co-Axial Chronograph Speedmaster is 44.25mm) in stainless steel have been reviewed before (click here), but we wanted to show you the full gold and bi-color models as well. Especially the full gold blew us away. An amazing timepiece with flat link bracelet, inspired by those very first Speedmaster and Seamaster 300 bracelets of the 1950s and 1960s.

Let’s start with the full gold Speedmaster ’57 Co-Axial Caliber 9301, with full gold bracelet. Although there never was a gold version of the CK2915 (the first gold Speedmaster was the BA145.022 in 1969 to commemorate the Apollo 11 Moon landing, only 1014 pieces made, which we discussed here), we really appreciate this flashy timepiece with the new in-house developed caliber 9301 chronograph movement.

If you take the whole watch into consideration, there is only little that correspond with the original CK2915 Speedmaster from 1957, except for some design elements (straight lugs, no crown-guard, Base 1000 bezel, applied logo on the dial). Nevertheless, Omega did an amazing job – in our biased opinion – in creating a (gold) tribute to that very first Speedmaster. The hands are not corresponding with the CK2915 model, as those have Broad Arrow hands.

The red gold/stainless steel Speedmaster ’57 reference 331.22.42.51.01.001 has the caliber 9300 movement, like the all steel models from this series. However, Omega added a red gold bezel to the watch as well as red gold pushers and crown. In the past, Omega had more of these gold/steel combination Speedmasters. From the Professional series, the last one we can think of is the Apollo 15 limited edition of a few years ago. And what about the Speedy Pro DD145.022 or the Teutonic from the 1980s? The Speedmaster Reduced was also available in gold/stainless steel as well as some of these Moonphase models. What we’re trying to say here, is that it isn’t new or should be regarded as a surprise that Omega introduces a gold/steel Speedmaster of the 9300 series.

As you can see, design wise the same characteristics as the all gold and all stainless steel models. However, the bi-color model is only available with a leather strap. There won’t be a bi-color bracelet for this model.

Our personal preference is definitely either the all stainless steel model or full gold model, although we wouldn’t mind owning one of the mentioned bi-color models from the Professional series. So perhaps it will – like those ones – grow on us in time.