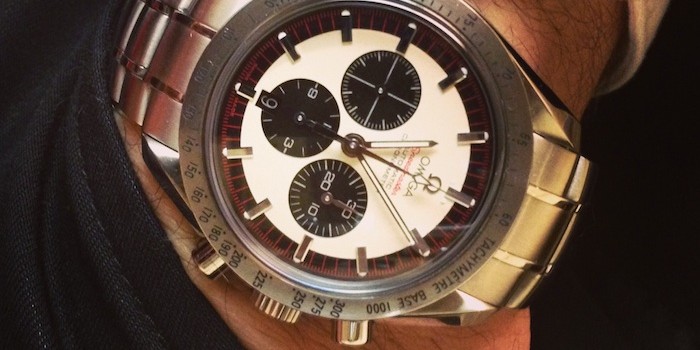 It’s Speedy Tuesday! As you probably know, when the Speedmaster was being introduced in 1957 there were no signs of a role in the space program yet. The Speedmaster was essentially meant for sports people and race car drivers. Once in a while, Omega still grabs back to the heritage of car racing and introduces a Speedmaster that has a link with racing.

Michael Schumacher was ambassador for Omega for a long time before hopping over to Audemars Piguet. However, when he won the world title in F1 racing for the 6th time (2003), Omega decided to introduce a Speedmaster broad arrow model to commemorate this accomplishment by the German F1 pilot. The Speedmaster Legend was born and limited to 6000 pieces only. The Legend collection was available with three different dials (red, black and white).

Today, we feature the white dial version of the Omega Speedmaster Legend, perhaps the most popular one due to its color scheme. Last week, Speedmaster enthusiast Raul sent us some pictures of his Speedmaster Legend. As you can see, the dial colors and layout reminds us of those old Rolex “Paul Newman” Daytonas (ref.6262).

Speedmasters are excellent watches to fiddle around with all kinds of straps. These watches look great on a bracelet but also on leather or even a NATO strap. Raul shows his watch in different disguises, including a beautiful leather ‘racing’ strap and a NATO strap.

It looks very familiar to the Speedmaster Professional or ‘Moonwatch‘ models from Omega. Is that correct? Yes, the case dimensions are more or less the same (diameter = 42mm) and the Legend has this typical a-symmetrical case design of the Speedmaster Professional. The finish of the case – polished horns and the satin brushed mid-case – is also identical to the hand-wound Moonwatch.

One thing that is complete different is the movement. The Speedmaster Legend ref. 3559.32.00 features the Omega caliber 3301 automatic movement. This movement is based on an F.Piguet (caliber 1285) chronograph movement, with a column wheel mechanism for the chronograph function. Besides being a column wheel movement, Omega also had it chronometer certified. Last but not least, the Legend (but also the Broad Arrow models with the same movement from that period) have a date feature. The Speedmaster Professional ‘Moonwatch’ that we’ve often discussed here has of course the hand-wound Lemania based movements. Without a date.

Omega made many versions of the Speedmaster and some of them were only short-lived in the collection. However, this non-Moonwatch model is one of the versions that I really like. I have not much going on for F1 racing or Schumi in particular, but the dial looks wonderful and the case design of the Speedmaster is almost unbeatable. The only downside I can think of is the association with the early Rolex ‘Paul Newman’ Daytona models. People might consider it as the poor man’s Daytona, while all you wanted was a neat looking Speedmaster.

In any case, if you are interested in the Speedmaster Legend you have to source one from the pre-owned market as it has been discontinued for quite a while. You should be able to find one however, but make sure that you check for its service history and whether everything (box, warranty card, manual) is there. The box was a black leather one with a signature of Michael Schumacher embossed in it. Also, these watches came with a special ‘Certificate of Authenticity’ booklet as most limited edition Omega watches do.

The original product page for this watch is still on-line at the official Omega website, click here.

We’ve also read that this watch – with the red dial – has been worn in the James Bond movie ‘Casino Royale’ by the dealer in the casino. Just so you know.