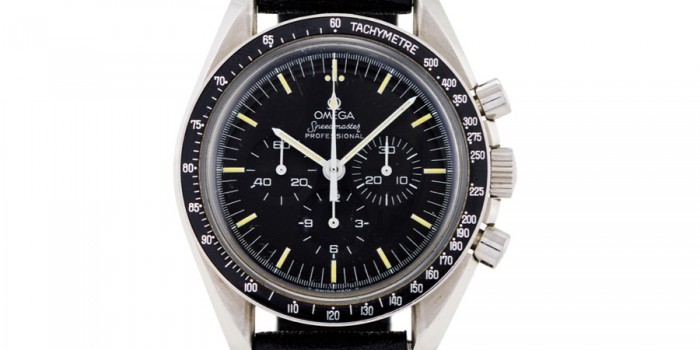 It’s Speedy Tuesday! Remember we’ve found a real astronaut’s Speedmaster Professional? One of the questions raised by the current owner and some of readers had to do with the estimated value of such a watch. We more or less have an answer since Cosmonaut’s Anatoly Artsebarsky’s ‘Flown’ Speedmaster Pro Hammered At CHF 47,000 Swiss Francs during the Antiquorum auction of November 10th. We don’t think they are exactly comparable as the watch we’ve found was one watch of 56 pieces that were made (radial dial) and sent to NASA and this cosmonaut’s watch appears to be a standard issue Speedmaster Pro 145.022 with normal engraving. Well, at least it gives an idea.

There is only little known about cosmonaut Anatoly Artsebarsky and his Speedmaster Professional. According to Antiquorum, he has been wearing this watch during his flight on the Soyuz TM-12 (1991) together with Sergei Krikalev and Helen Sharman (British). Artsebarksy was a – then – 35 year old commander and spent 144 days, 15 minutes and 21 seconds at the MIR Space Station. All this time, he wore this Omega Speedmaster Professional.

He performed 6 space walks (Extra Vehicular Activities) during that flight. As you know, the Omega Speedmaster Professional Moonwatch is the only watch allowed on the wrist of a NASA astronaut when he (or she) performs EVAs. For cosmonauts or ESA astronauts for example, this is a bit different.

Before this Speedmaster was hammered at CHF 47,000 Swiss Francs (CHF 58,750 Swiss Francs including buyer’s premium) this watch belonged to a British fellow. Only little is known about Anatoly Artsebarsky. This Ukrainian cosmonaut was born in 1957 and flew on one mission, the MIR EO-9. We haven’t found photos from him actually wearing this Speedmaster Professional on board (or during EVA). If you’ve found one, please let us know.

In any case, the previous owner did have some so-called provenance with the watch. A signed Omega box and a letter written and signed by Artsebarsky stating that this was his actual Speedmaster Professional and that it went with him outside the MIR Space Station.

What remains a bit of a mystery to us is how he got this Speedmaster watch. As you can see on the picture below, this Speedmaster Pro reference 145.022 with serial number 48261214 has a normal caseback and seems to be a standard issue Speedmaster. We wonder whether it was bought by himself, given to him by the Russian Federal Space Agency or got it in a different manner. As you know, the NASA ordered specific Speedmaster watches with a plain caseback in order for them to engrave their own numbers and descriptions for their own administration. This doesn’t have to be the case with the Speedmaster for cosmonauts of course.

If you have a Speedmaster you want to see covered here? Do let us know! We’d love to see your Speedies.