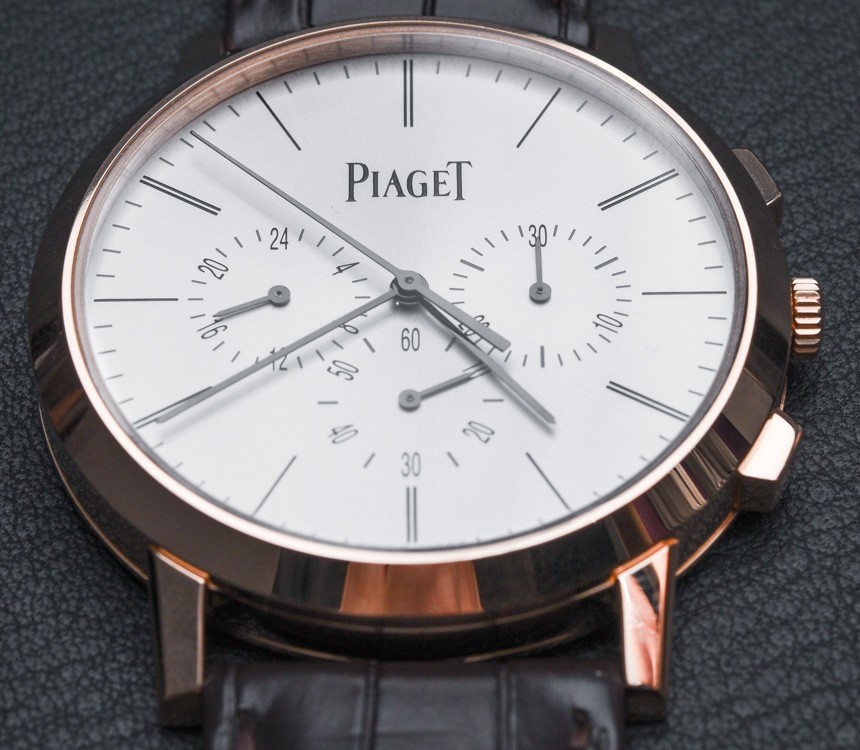 In an era of bulk and ostentation, the Piaget Altiplano Chronograph stands out for its old-school values. As the thinnest flyback chronograph in the world, this model builds on the legacy that began with the release of the world’s thinnest hand-wound and automatic watches in 1957 and 1960, respectively. While others are concerned with space-consuming complications or eye-catching shock value, the Altiplano harks back to a simpler era, when luxury items were more restrained. 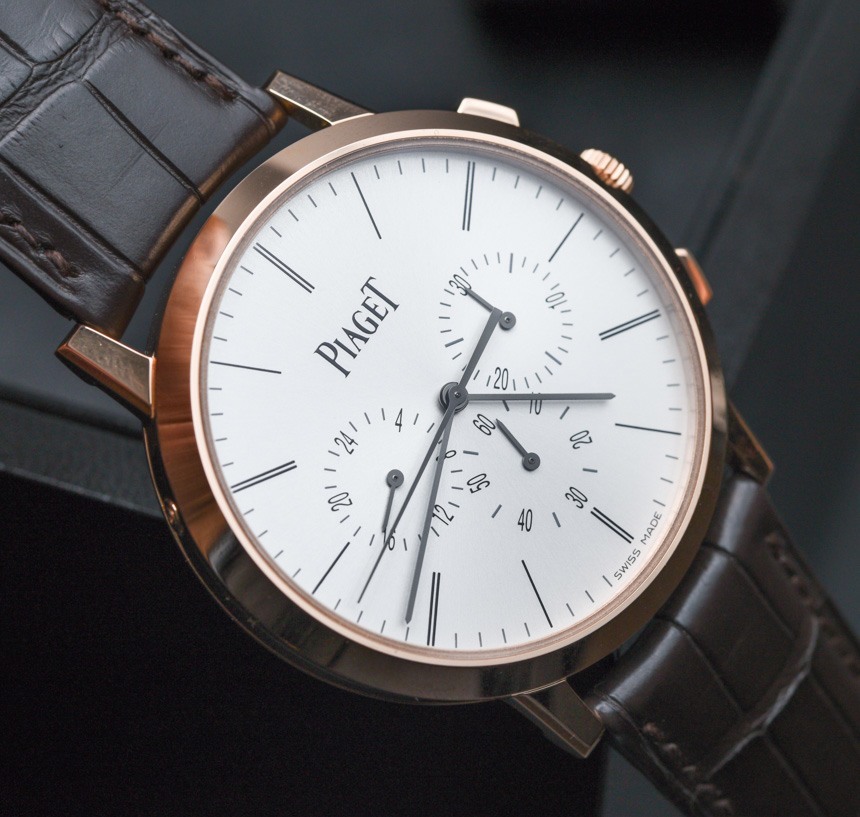 In the case of the Piaget Altiplano Chronograph, less is certainly more. The aesthetic is clean and direct. Single black lines to mark the hours and minutes, while parallel lines mark the even hours. The three sub-dials are decorated with tall, slim Arabic numerals and are located towards the centre of the dial at 3, 6, and 9 o’clock. Unusually, the 9 o’clock sub-dial is actually a GMT dial, not an hour counter as one might expect.

This may annoy some, but given that this watch’s main complication is a fly-back chronograph, it seems justifiable (fly-backs are more often used to time shorter periods). The fly-back function simply means that the chronograph hands can be reset to zero and restarted with a single push of a button. This is handy if you are trying to time something accurately and accidentally false start, or if you are timing a sequence of events with little or no pause between the end of one and the beginning of another. Whatever use you find for it, its most prolific might be as a conversation starter. 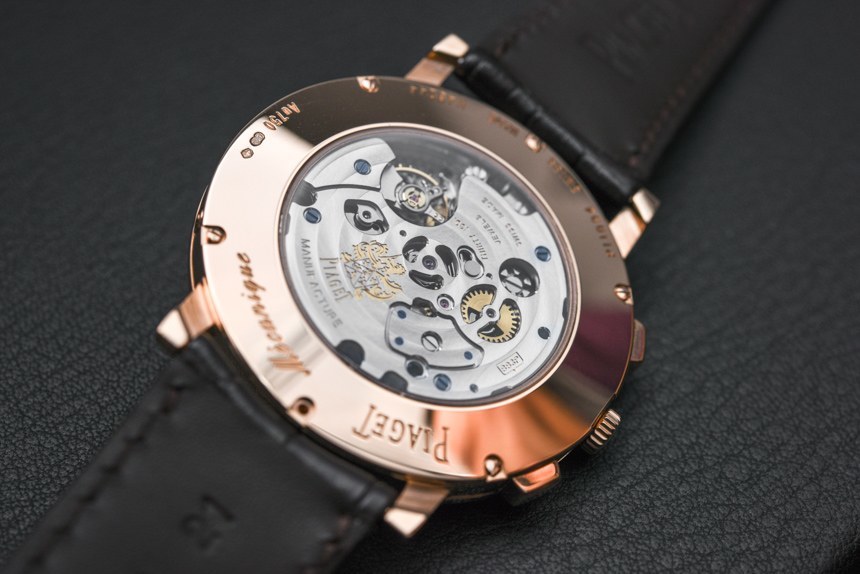 This is a custom, specific, proprietary movement developed to break records. It is, in this sense, a work of art and engineering in harmony. You could find plenty of examples of major brands that charge just as much for a bog-standard ETA, cleverly hidden in or disguised by a glitzy case. The Piaget Altiplano Chronograph is no pretender; it is classy to its core. The eagle-eyed might notice that the case is actually larger than it needs to be – the Calibre 883P could easily fit in a case under 40mm diameter, but Piaget have chosen to give the Piaget Altiplano Chronograph a bit more width to satisfy modern tastes. 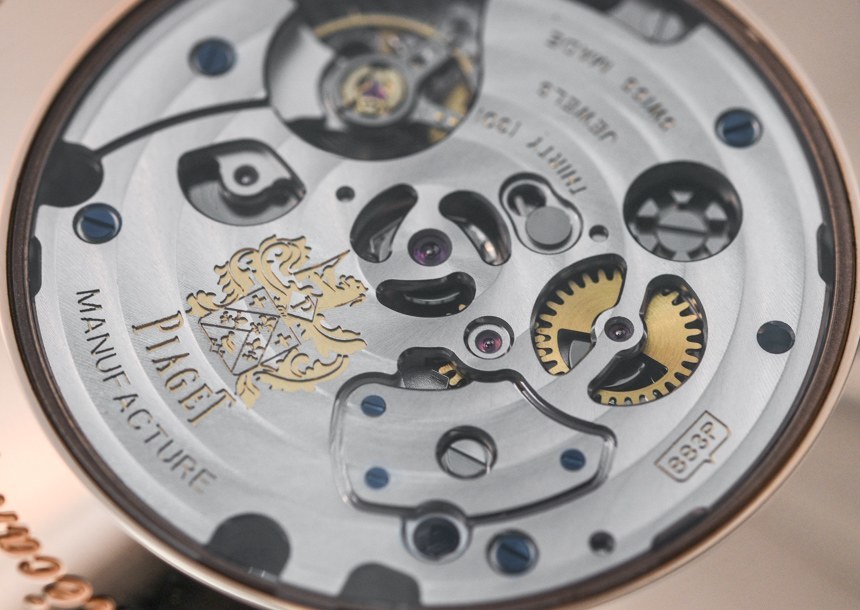 The result is that the sub-dials appear somewhat bunched-up in the centre of the dial. I, personally, like the look and the space that the central busyness leaves for the hour markers to breathe, but it may not be to everyone’s taste.

The 41mm rose gold case is noticeably sharp. Its plain, straight sides, and angular bezel give the whole watch the appearance of size, despite remaining comfortable to wear – the case comes in at a remarkable 8.24mm tall. Due to the starkness of the flanks, the watch is able to satisfy the modern requirement for presence, while remaining slight enough to fit comfortably under a cuff. The Piaget Altiplano Chronograph retains a consistent identity through the use of stout, polished pushers that blend in with the otherwise uncluttered silhouette. The pushers need to be there because it’s a chronograph, but their presence is muted and all the better for it. 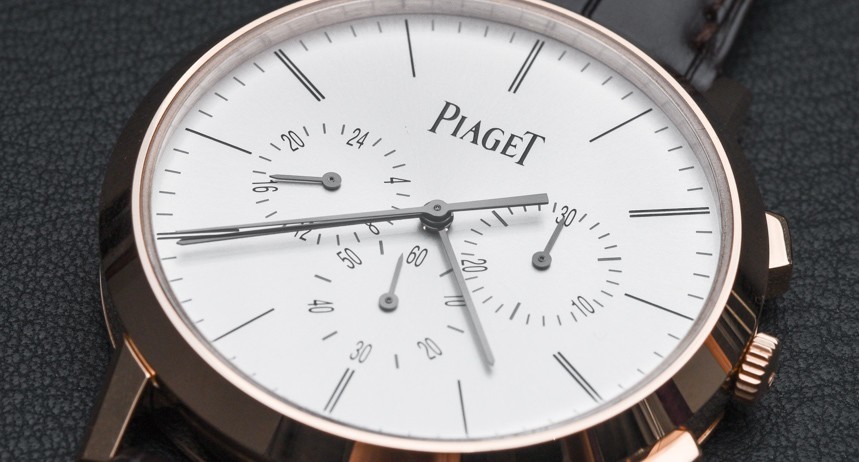 This kind of balance does not happen by accident. Great pains have been taken to reduce the thickness of almost every component in the watch. Piaget state that the canon pinion is 0.12mm thick, the barrel staff 0.115mm, and the chronograph gear finger a staggering 0.06mm. The Calibre 883P is a world-leading 4.65mm thick. Despite its diminutive size, it also boasts a 50-hour power reserve. 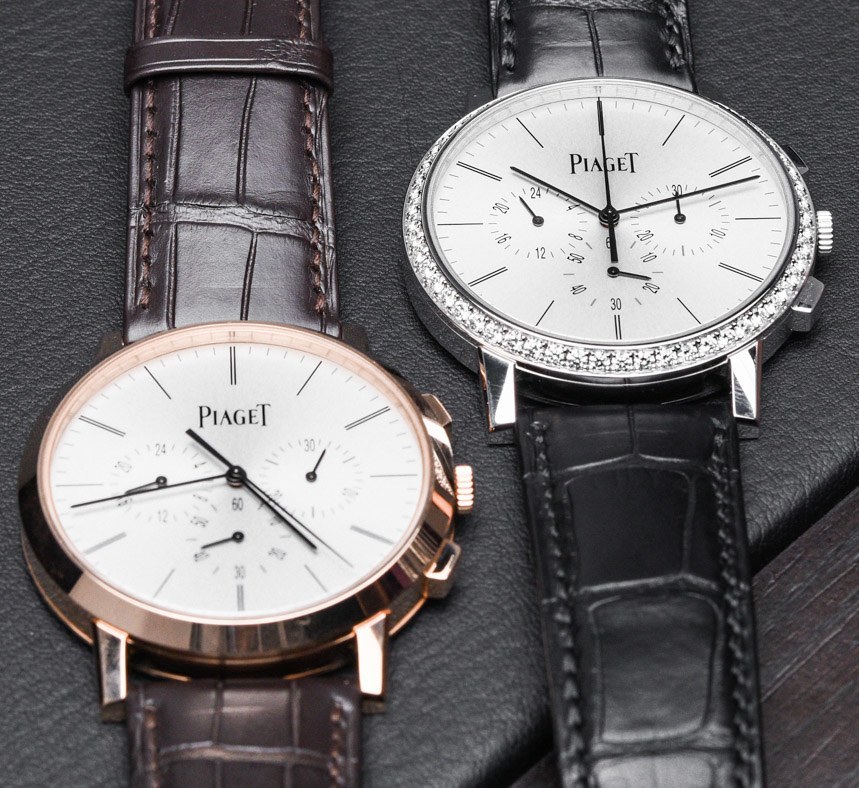 These impressive feats have been achieved because of the way Piaget’s design team has integrated all of the chronograph components into the movement rather than going for a modular construction that would have added height. The movement itself is an aesthetic treat. I love the gilded logo, engraved against a circular Geneva Wave pattern. The screw balance is on show, and there is just enough visible motion to entertain the eye without sacrificing the necessary rigidity of the bridges. Blued screws add a flash of color to proceedings, while bevelled edges catch the light brilliantly. One of the greatest challenges faced by watch designers is finding a way for the wearer to actively engage with his or her timepiece. Being able to see the effect of the pushers when actuated by exposing the polished column wheel is a really nice touch. 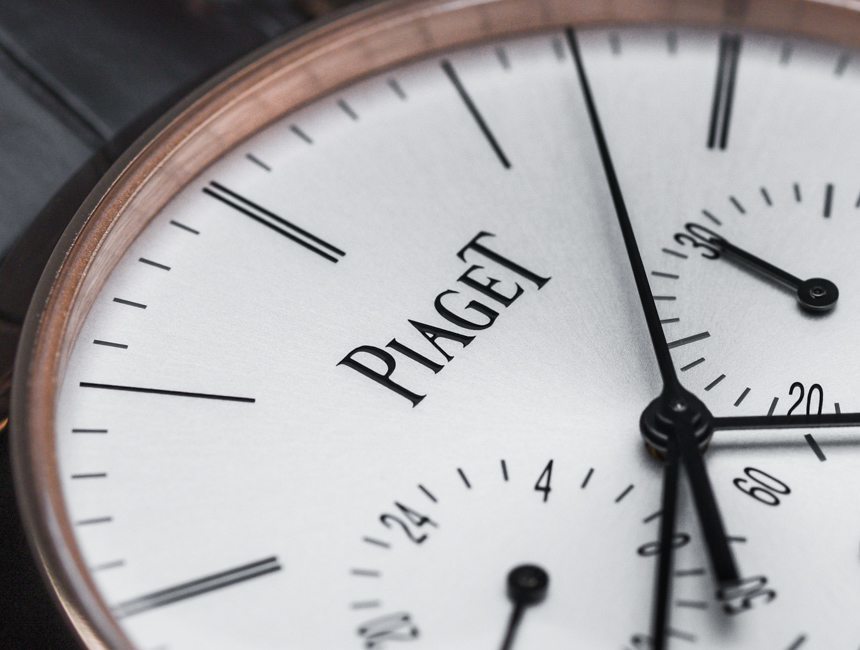 With the Piaget Altiplano Chronograph, Piaget has reconfirmed its status as a major player in the ultra-slim market. These days, it is a more niche sector than it has been in the past but still attracts plenty of interest. It is good to see other brands making an effort to steal Piaget’s crown. For example, the Arnold & Son UTTE currently holds the world record for the slimmest Tourbillon, but the Breguet Classique Extra-Thin Automatic 5377, showcased at last year’s Baselworld, will take its place when released. With the increasing ubiquity of new and curious complications, the ultra-slim market could be due a renaissance. It seems natural that improvements should follow a simple evolutionary process: conception – complication – refinement. Once a complication has been mastered, what more can one do but make it smaller and simpler? 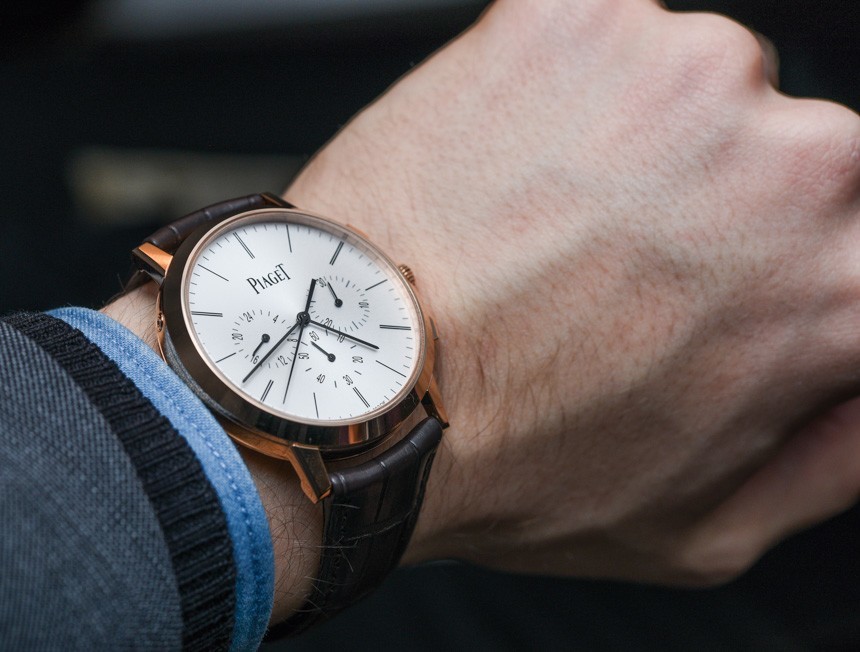 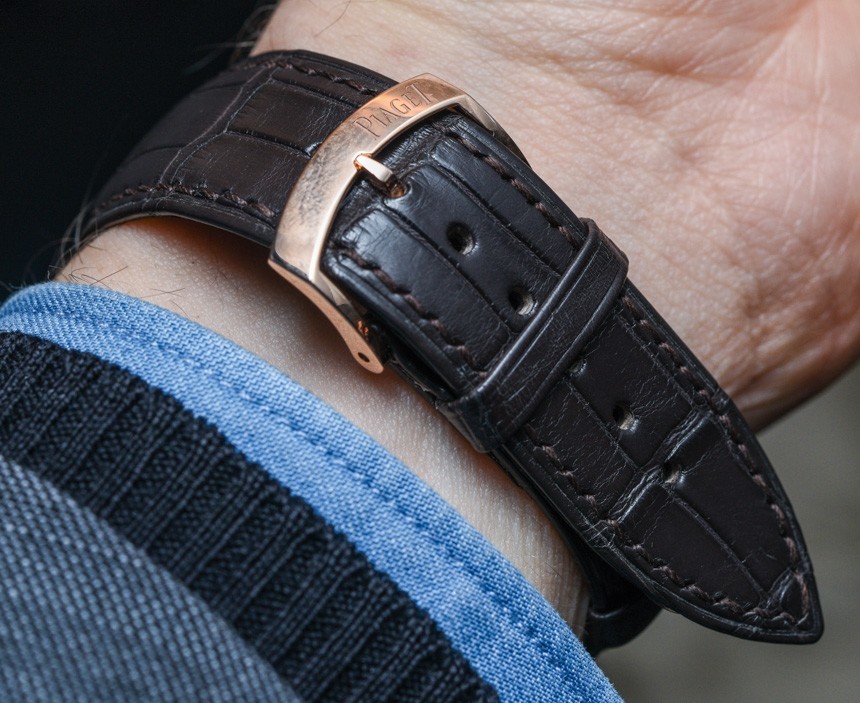 Mired in a world of wrist giants as we are, it may be hard to see a return to the old ways, but reducing the size of the movement simply increases the potential of big watches to house even more mechanical magic. For example, you could very nearly fit two Calibre 883Ps in the case of an Omega Planet Ocean – imagine the possibilities raised by a duplex movement! For that reason, I think Piaget’s continued work in this field is more than a quaint reminder of how things were, and rather a soul-stirring glimpse at what the future could yet hold.

The price of the Piaget Altiplano Chronograph is $29,000 and it will be released in September 2015. For those who don’t think a rose gold chronograph is fancy enough already, there will also be a white gold, diamond bezel version. piaget.com