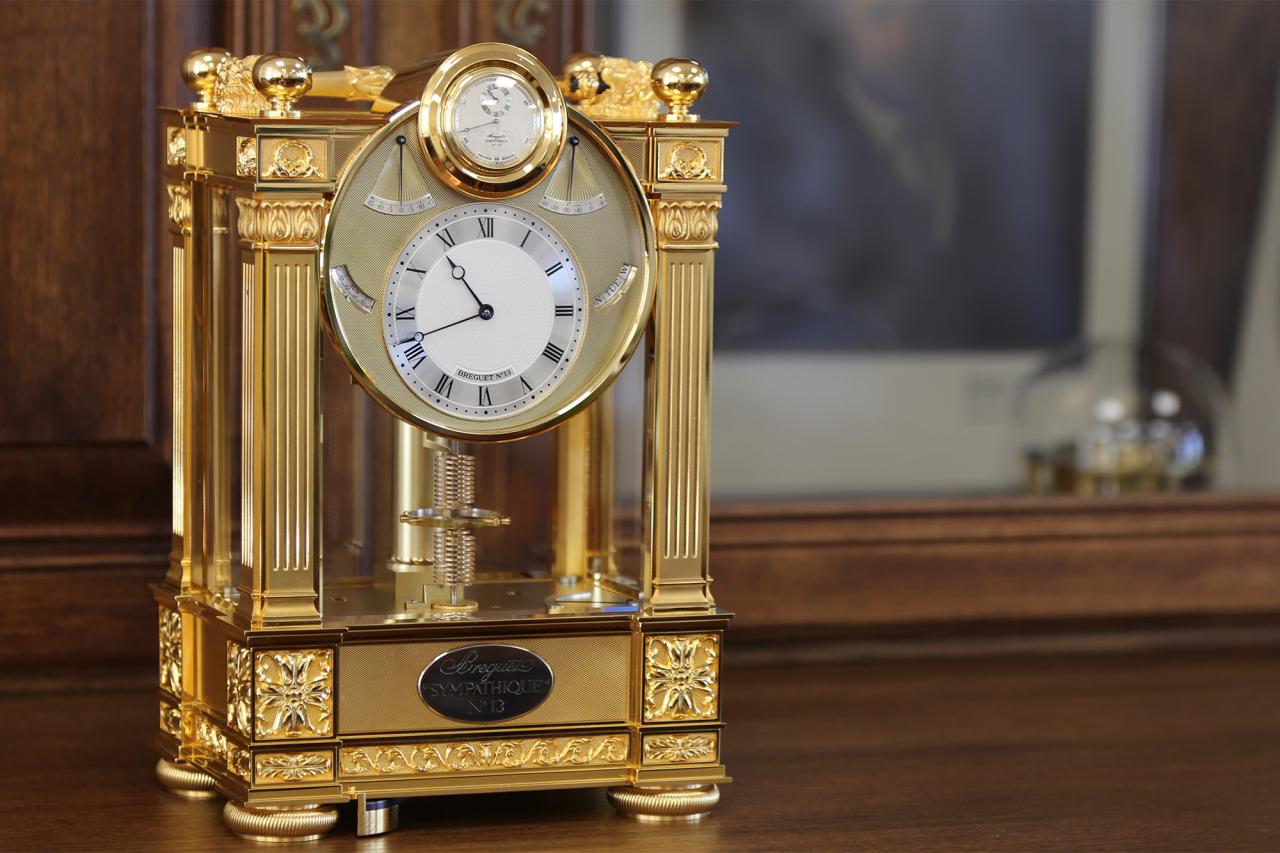 The little table clock, whose name means literally means “likeable” in French, is one of the first pieces any visitor sees when entering Breguet’s manufacture in the Vallée de Joux is a timepiece more welcoming than the Sympathique. It is perhaps the most appropriate introduction to the watchmaker, as it offers a glimpse at one of Abraham-Louis Breguet’s earliest inventions as well as the company’s current direction. 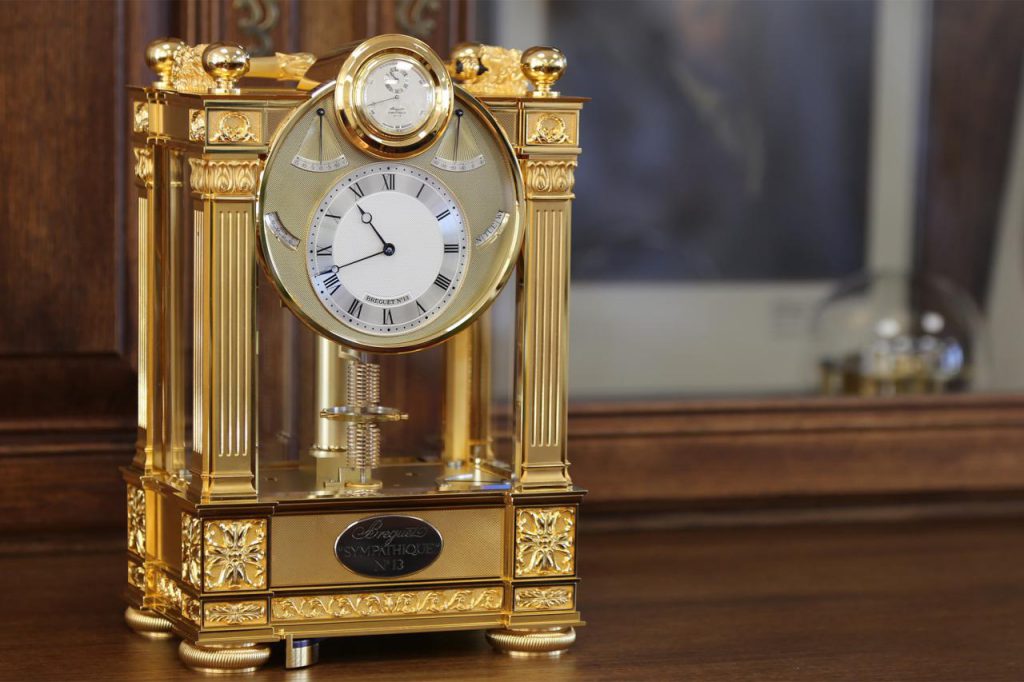 1 OF 4
The Breguet Sympathique N°13, the first timekeeper you meet when you visit the manufacture.

The clock in Breguet’s restoration department is number 13 IS a designation reserved for non-commercial pieces such as this exposition piece. It is part of the latest production of Sympathique clocks, which has run from 1996 through to today. The clock displays the hours and minutes, plus the month, day, date, phases and age of the moon, and equation of time, in addition to having a centigrade thermometer and a power reserve indicator built in too. But what makes this clock special is what sits front and center, just above the clock’s time display – a detachable watch that docks into the main clock itself. 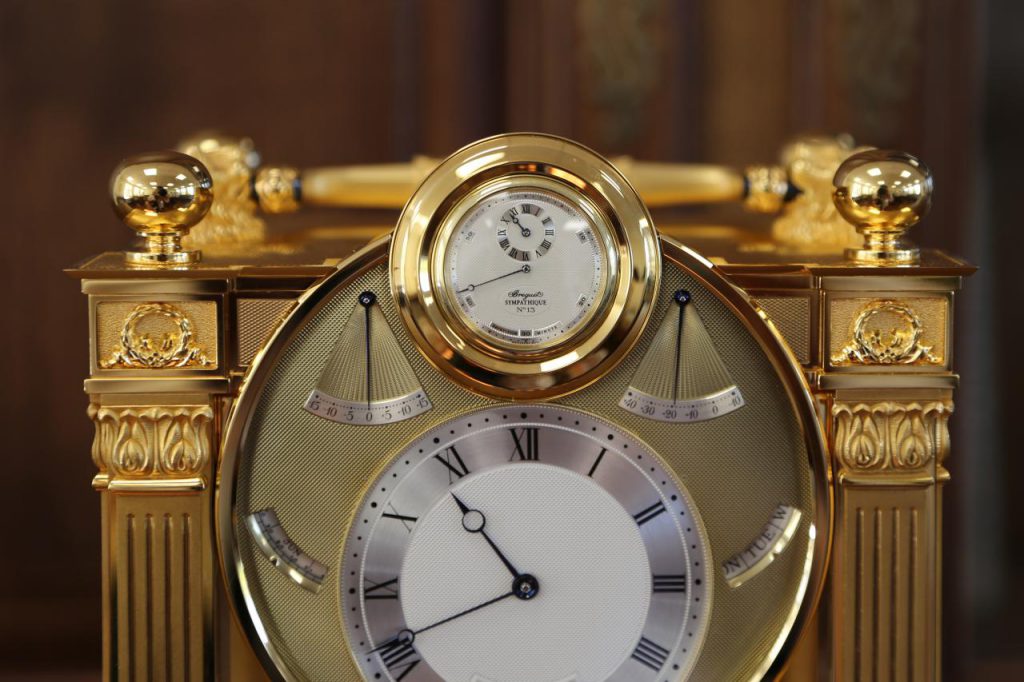 2 OF 4
The watch at the top of the clock transforms into a wristwatch.

But before we get into this Sympathique, let’s look at where the intriguing clock/watch combo started. Designed by Abraham-Louis Breguet in 1793, a few years before he created the tourbillon, it was the first clock capable of automatically regulating and setting a portable timekeeper. The very first Sympathique simply displayed the hours and minutes, and the removable watch was of course for the pocket, but it was an utterly revolutionary creation. The idea was that the wearer would dock his watch every night before going to sleep and in the course of an hour or so the watch would be brought into synch with the more accurate clock. In the morning, the watch could be pulled out, placed in the pocket, and worn like normal. Nothing like this had existed before and it must have seemed like magic to Breguet’s contemporaries (as did most of clockwork, if we’re being honest).

Breguet only made five examples during his lifetime, some of which can be traced to illustrious owners such as Mahmud II, Sultan of the Ottoman Empire, and George IV of England (that clock we know to have been delivered in 1814, when he was Prince Regent). The best known example however was made for the Duc d’Orléans circa 1835 in an extremely ornate case including tortoise shell and over-the-top gold work. It landed on the auction block in December 2012, when Sotheby’s sold it for $6.8 million. It re-set the record for a clock sold at auction, which it had previously set at $5.8 million when it was sold in 1999.

In The Art Of Breguet, George Daniels describes the Sympathique as “a jewel of misplaced ingenuity in a forest of scientific horological endeavors, and their very existence is sufficient reason for their manufacture, for they never cease to amaze and mystify.” The man was the master of a good back-handed compliment. 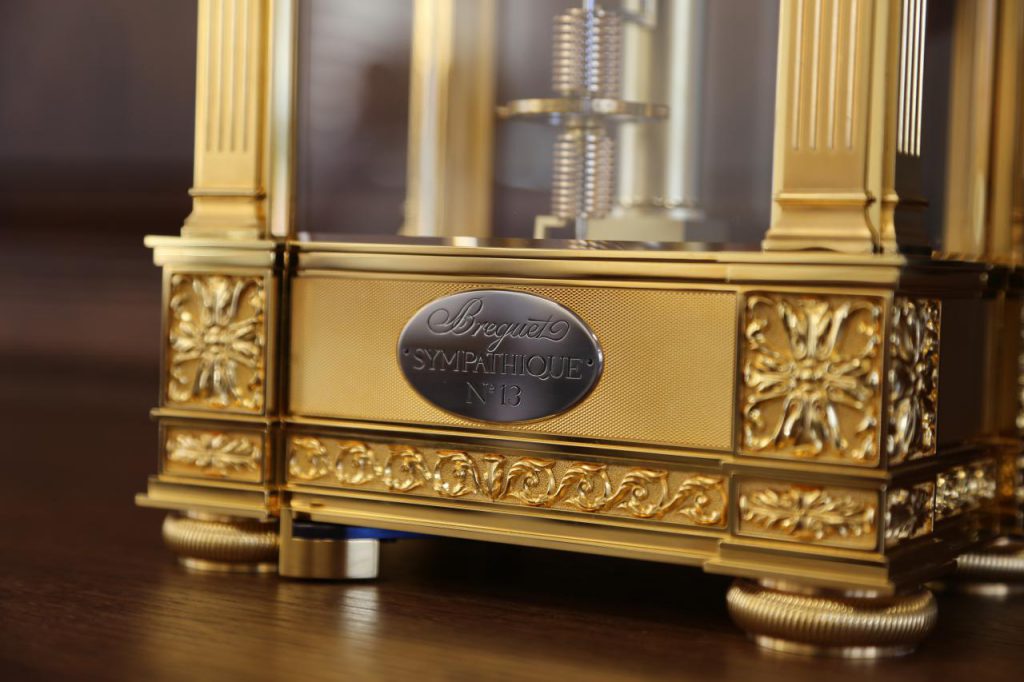 3 OF 4
Clock number 13 was picked as the non-commercial model because of potentially superstitious clientele.

Over the years, the design of the clock has varied widely – there’s everything from the humble Sympathique No. 666 in plain mahogany and bronze, to the aforementioned clock owned by the Duc d’Orléans (seriously, that clock is as full-on as it gets). Through it all though, the base concept has remained almost entirely intact for more than 200 years.

I say almost because Abraham-Louis Breguet’s grandson Louis decided to improve the Sympathique mechanism by adding a winding function which essentially transforms the clock into a charging station for your watch. Additionally, early models only set the minute hand (the thinking was that a wearer wouldn’t see more variation than that in a day’s time), but late models are capable of setting the hour hand as well. 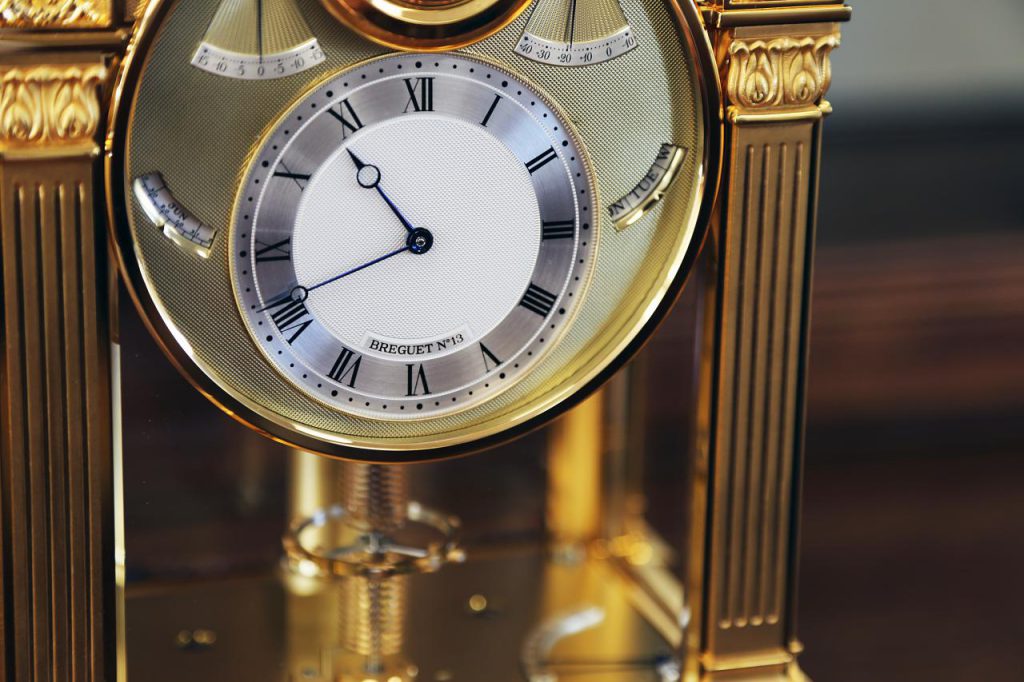 4 OF 4
The clock has the unmistakable hallmarks of a Breguet timekeeper, from its engine-turned silver dial to its Roman numerals and blued-steel apple hands.

Breguet continues to make the Sympathique, although wristwatches have replaced the pocket watch. The latest Sympathique is part of a limited edition of 20 pieces, introduced in 1996 but yet to be completed. The clock comes with one of two wristwatches, a one-minute tourbillon or a 30-minute repeater (Sympathique number 13 features the latter), and either can be skeletonized or not. So, in total, four watch types are offered, at various prices, and these prices are only available on order request from Breguet.

The Sympathique is absolutely one of the most special timekeepers Breguet makes today, as it was back in the 18th century. It’s also a gentle reminder that battery life and synching our data are dilemmas that have rattled mankind for centuries, even before our lives became consumed by electronics.