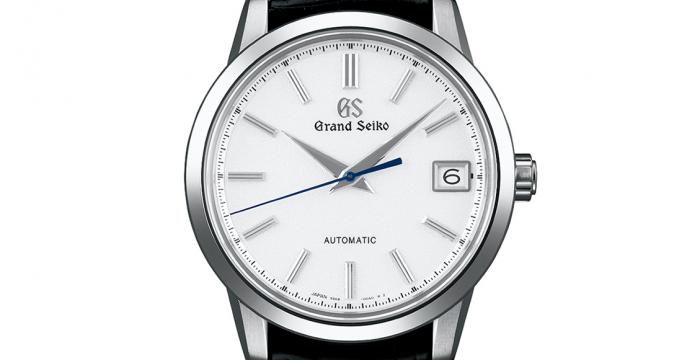 Baselworld 2017 will probably go down as one of the most exciting, important and divisive releases in Grand Seiko’s history. 2017 will see a Grand Seiko that is using contemporary materials like titanium and ceramic with big, bold and aggressive styling. But that is only half of GS’ new models. The other half is not only traditional, it’s the most traditional design that Seiko has offered since the mid-1960s. That’s because the remaining models are basically reissues of the the very first Grand Seiko, released back in 1960.

That stark contrast alone would provide sufficient material for watch collectors to discuss for months, but even more important than the watches was Grand Seiko’s decision to change the logo on their dials. Basically, the solitary applied SEIKO logo has been removed entirely. Replacing them are the GS and Grand Seiko, previously at 6:00. Writing, like spring drive, remains at 6:00. In the near future, all Grand Seikos, including existing models, will receive this update, so if you find yourself preferring the current format, you may want to order one fairly soon.

Finally, after years of fans demanding it, Grand Seiko has given us an official GS Hi-Beat diver. The new models are the SBGH255 and SBGH257 with black and blue waffle dials respectively. Stylistically, these closely follow the format we’ve seen in previous GS dive watches, like the legendary SBGA029 or the relatively recent SBGX115. Each features GS’ premier mechanical movement, the 9S85 Hi-Beat, which ticks 10 times per second compared to almost all other movements’ 8.

The two new watches are large, although not enormous, at 46.9mm, but they won’t feel heavy thanks to their use of titanium. Personally, I think they look tremendous. I love the case and I think the waffle dial looks very good as well, plus the 9S85 is one of my favorite movements of all time (and one I personally wear). The blue SBGH257 is priced at $9,800 and the black SBGH255 is $9,600.

Continuing the theme of Grand Seiko’s larger and more aggressive new designs, we take a look at the blue SBGC219, the black SBGC223 and white SBGC221. These, of course, are new spring drive chronographs, the first featuring the super accurate 9R96 and the latter two featuring the 9R86. They are made of alternating titanium and ceramic construction would should be both scratch resistant and light.

Another interesting aspect of these new chronographs is that these are actually using a unique placement of the brand logo, now at 11:00 instead of 12:00. This marks another influence of the long-defunct Ananta line on Grand Seiko, which used this layout for their own spring drive chronographs. The SBGC219 will sell for $15,800 while the SBGC221 and SBGC223 will sell for $14,800.

Now we take a look at the Grand Seiko that GS fans are familiar with, the simple and timeless dress watches the brand has historically been known for. While the sportier GSes were well-received this year, the acclaim has been nearly universal for these three new models, the austere platinum SBGW251, the yellow gold SBGW252 and, my personal favorite, the steel SBGW253 with a blued seconds hand.

These new models are as traditional as it is possible for Grand Seiko to get, being nearly direct reproductions of the original 1960 Grand Seiko. This incredibly beautiful trio feature one of my favorite, and most underutilized, Grand Seiko movements, the hand wound 9S64. I believe it uncontroversial to say that these three are some of the most popular watches released at Baselworld 2017.

And now we take a look at my personal favorite Grand Seiko of this year and, quite possibly, my favorite watch released at Baselworld 2017: the SBGR305. In my opinion as a lifelong Seiko collector, the SBGR305 finds the sweet spot between respecting the brand’s history while still producing something new. It’s true, the prior three Grand Seikos are breathtaking, but the company cannot move forward based purely on the success of its legendary ancestors.

The SBGR305 is a new watch, not a revolutionary one. This model may be lost in the shuffle between the past and future-looking models that came out this year, but it shouldn’t be. The dial is breathtaking in its simplicity, yet not boring. It manages to find Nomos Orion-levels of austerity, but thanks to a typically-Grand Seiko textured dial, it manages to somehow be more interesting than similar watches. For my own part, I’m still a bit undecided on the logo change, neither against it or in favor of it, yet here, on the 305, it works perfectly.

Beneath its beautiful, yet somewhat predictable, exterior, lies quite a bit of sophisticated engineering. The 40.5mm watch is made of a new proprietary titanium alloy which GS claims to be much harder than existing versions of titanium. This is very appealing to those collectors who, like myself, are very concerned with the scratch-prone nature of titanium.

Inside beats a new movement, the 9S68, although we know little about it at the moment. It appears to be a larger version of the 9S65 intended for bigger cases.